The War on Christmas
Posted by jurassicpork | 9:21 AM 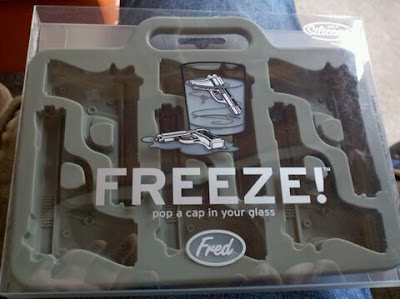 Yes, it's that time of year again when the silly season gets even sillier when right-thinking Christians impose on the rest of us how we ought to be spending a pagan holiday. Such as the above gift idea for that gun-clutching relative every family has and pretends to tolerate every Christmas. And what better way to silence blasphemous liberal tongues calling for background checks and national registries than to figuratively shoot their tongues off with these semi-auto ice cubes? Imagine the looks on your liberal relatives' faces when they look into their drinks and see this baby bobbing up and down like a murder weapon that just won't go away! To quote Emeril, "Can I freshen your drink? Bam, Bam!" 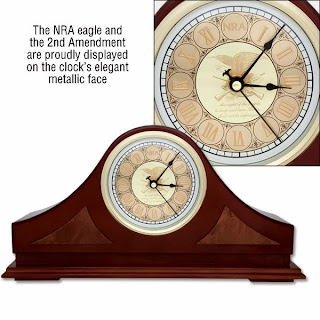 Continuing our theme of NRA-themed holiday gifts, how about this fabulous Millennial clock from the official NRA store that features not only the time and 2nd Amendment but also conceals a small- to medium-sized handgun? Not only does this fine, furniture-grade accessory conceal weapons and tell the time, the built-in alarm even chimes every time a militia group announces a coup against the government, which is about 12 times a day.
Moving on, when having 33 rounds in a ridiculously extended clip just isn't enough, there's this baby...

...in case you still can't hit your target from point blank to medium-range 33 times in a row and need to get even closer for that eye-to-eye debate with anyone who even just looks at you funny, as they likely will after you miss them with 33 shots in a row. Yes, that is a mini bayonet for a Glock 9mm handgun. Now, finally, good guys with guns may actually do some damage when they throw their empty gun at someone! 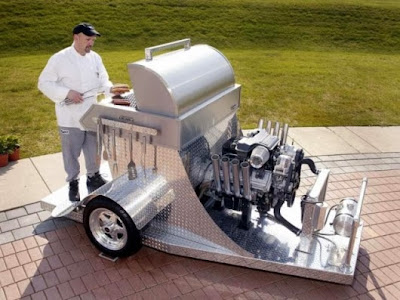 As proof that we haven't even come close to peak oil, there's this Tim Taylor-inspired monstrosity to consider for the back yard chef of the family: A 345 horsepower, 5.7-liter V-8 HEMI engine-powered grill wrapped up in 330 feet of stainless steel. With the V-8 engine, you can get about 30 hot dogs per gallon and the nearly 350 ponies will flash-fry a herd of buffalo in three minutes flat. Yes, the tyranny of clean-burning propane's now a thing of the past, guys. Who cares about the exhaust and what's a little global warming among friends, right?
Who coined the phrase, "No pain, no gain"? 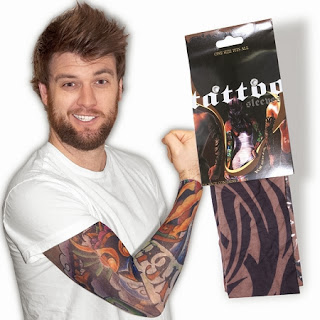 Now, thanks to fine retailers like this one, one can sport tough-looking tattoos without actually experiencing the pain of getting them. For less than $7.50 an arm, you, too, can look like you belong to a South Central LA street gang or survived multiple prison shower rapes. Perfect for that conservative brother or son in law who wants to look bad-ass yet just can't seem to get over that childhood fear of needles. 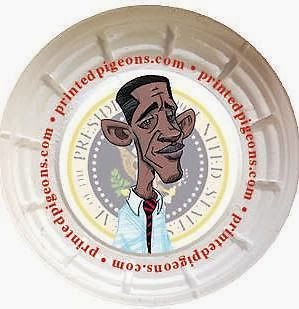 In case you're averse to Black Friday or going to the mall, there's always eBay. And as long as there's eBay, why not get something else for that Obama-hating conspiracy theorist in the family such as these skeet-shooting Obama targets? 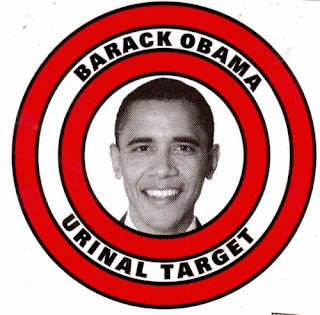 And, just in case you have an Obama-hater in the family but one who's passive-aggressive, there's this Obama Urinal target also for sale on eBay for less than two and a half bucks! 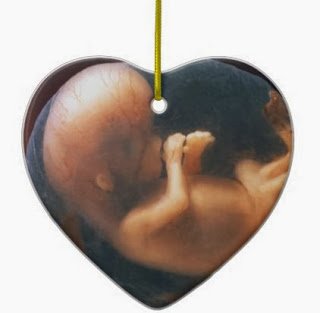 What would Christmas be without having a spirited debate about inert bundles of cells with your church lady aunt? She can now win any abortion debate at the dinner table simply by hanging this grotesque, heavily-veined ornament of a fetus too young to enjoy Christmas. Yes, it's part of the Pro-Life Crusader Christmas Tree Ornament line! And we all know the original definition of the word crusader don't we? "Adopt my extremist Christian views, heathen, or I will turn you into a rotting corpse." Amen! 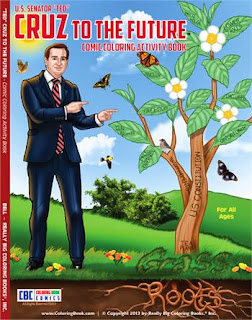 Got a misguided, lib'ral-minded youngster in the house? Then give the adorable but ideologically-crippled little tyke this really big Ted Cruz coloring book from Really Big Coloring Books! Yes, this masterpiece of children's literature joins "Rapey" Rush Limbaugh's factual historical account of the talking horses and cell phones of the American Revolution by indoctrinating edumacating impressionable minds about the evils of ObamaCare. Yes, in this "non partisan" coloring book, Tailgunner Ted and his shiny super suit reminds our nation's future that America is a Christian nation, that providing health care to those who want it is bad business and that ObamaCare is the greatest scourge since... well, since ever! (The first 1000 who order will get a box of free crayons. Unfortunately, they're all white and flesh tone.)
0 comments