Brilliant Recent Posts
Dawn of the Desperate
Thanksgiving Misgivings
Caption Contest
Dear Scott Adams, Love Dilbert, but you're blamin...
Top 10 Signs Walmart's Mistreating its Workers
We Have Met the Tea Party and It Is Us.
Sisterhood is powerful....well, maybe not so much
Thought Salad
Greetings from the Land of the Walking Wounded
Rules for a 21st Century War 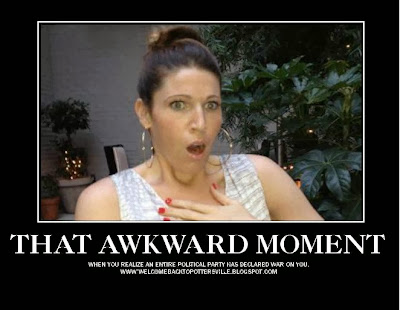 Today in Politico, it was reported that Speaker of the House John Boehner (R-Ohio) and the National Republican Campaign Committee had sent Republican subordinates to an ad hoc charm school in order to teach them and their aides on how to address women, especially those running for their seats. This is part of the GOP's new outreach program designed to show they can be just as sensitive as their colleagues on the left side of the aisle. In the words of Politico, this means the NRCC "wants to make sure there are no Todd Akin-style gaffes next year." What were some of the top ten suggestions made to these Republicans about how to address women?