Brilliant Recent Posts
Thanksgiving Misgivings
Caption Contest
Dear Scott Adams, Love Dilbert, but you're blamin...
Top 10 Signs Walmart's Mistreating its Workers
We Have Met the Tea Party and It Is Us.
Sisterhood is powerful....well, maybe not so much
Thought Salad
Greetings from the Land of the Walking Wounded
Rules for a 21st Century War
Before...


Dawn of the Desperate
Posted by jurassicpork | 12:25 PM

Being a socially-, economically- and politically-conscious liberal gives one a certain amount of moral superiority and schadenfreude. At no time is this latitude more readily and freely granted than on Black Friday (now permanently known as Black Thursday).
And maybe this was what the great George Romero had in mind 35 years ago when he directed the original Dawn of the Dead in 1978. It wasn't lost on film critics nor was it a mere thoughtless and random choice when Romero centered his movie around a mall. The sight of mindless zombies staggering around a mall with no purpose in mind other than finding some braaaiiiinnnssss was as much social satire as it was horror.
Romero's idea, obviously, was to show that even when humans come back from the dead as zombies, their instincts and whatever stubborn memories remaining even after death and decomposition will inevitably bring them back to where they spent much of their actual lives.
Indeed, what's the major difference between something like this... 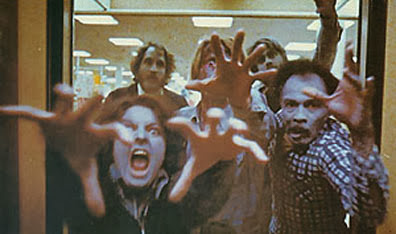 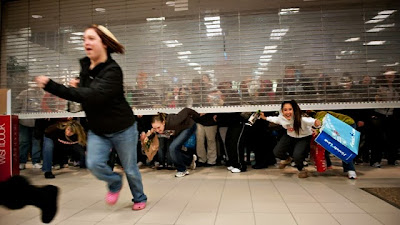 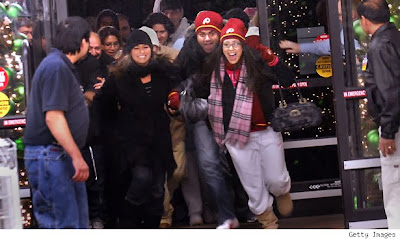 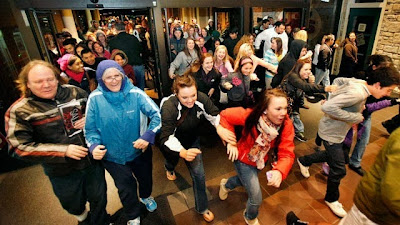 Many more smiles for both shoppers and retailers. 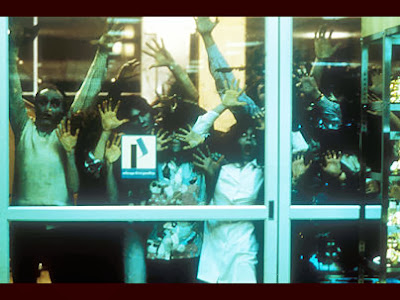 It's an irony that so many of us will willingly forgo spending time with loved ones on Thanksgiving waiting on lines for a week or more so we can get a few dollars off on a Christmas present for the very same people we'd abandoned a month earlier. This is the power of hype and the results are evident. Five years ago, to little fanfare, a Walmart worker was killed and a pregnant woman nearly trampled to death as they opened the doors on a Black Friday. Well, actually, they didn't have the chance to open the doors as 2000 shoppers literally burst in and tore the glass doors off their hinges. The store hired only two security guards and the only one who showed up watched in horror as the manager was safely hiding in a hotel. It incurred a $7000 fine that Walmart, to this very day, still hasn't paid. It's a wonder Walmart didn't issue a press release citing the death-by-asphyxiation of one of their own low-paid temp workers as a sign of consumer confidence rebounding.
Because, to give you an idea of just how truly evil Walmart's executives are, they'd rather spend tens if not hundreds of thousands of dollars over a period of five years or more on shysters to fight a $7000 OSHA fine, a sum of money Alice Walton probably has in the ashtray of her car. Because if they pay the fine for not adequately protecting one of their workers (he was actually a low-paid temp), why, word might spread that Walmart has to safeguard the lives of their workers and we can't have that, now can we? 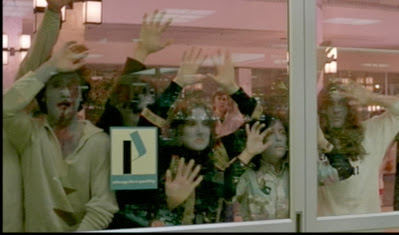 And just as Romero's 1978 movie makes a mockery of humans, specifically Americans and their post-mortem consumer instincts, so do we make a mockery of the Black Friday/Thursday protesters who are braving the elements and risking losing their jobs for doing what they think is right.
Sure, getting a bargain is a good thing, especially when money's tight.
But not at the expense of our human dignity, human lives and in the name of "honoring" one holiday while forgoing another.
1 comments