Brilliant Recent Posts
We Have Met the Tea Party and It Is Us.
Sisterhood is powerful....well, maybe not so much
Thought Salad
Greetings from the Land of the Walking Wounded
Rules for a 21st Century War
Before...
Blog Postcards From the Edge (A B@B exclusive)
Blogrollling In Our Time: Are You SURE You Want T...
May the Odds Be Ever in Our Favor
McHammered 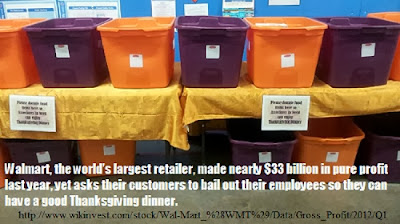 This past week, Walmart was the recipient of some unwelcome publicity in advance of Black Friday Thursday when an associate at the Canton, Ohio store sent a picture to OUR Walmart. It was of a series of bins asking associates to donate food items so their neediest workers can have a good Thanksgiving dinner. This sparked national outrage and even brought ABC News and actor Ashton Kutcher and his 15,000,000+ Twitter followers into the fray, sparking a flame war that lasted days. But the employee food drive to keep Walmart associates from going hungry on a Thanksgiving they're likely to have to work, anyway, is just the first sign that all is not well at the world's largest private employer. What are they?