Brilliant Recent Posts
IOKIYAR
What Nelson Mandela Couldn't Teach Us
Top 10 Tips for GOP Congressmen Running Against Women
Dawn of the Desperate
Thanksgiving Misgivings
Caption Contest
Dear Scott Adams, Love Dilbert, but you're blamin...
Top 10 Signs Walmart's Mistreating its Workers
We Have Met the Tea Party and It Is Us.
Sisterhood is powerful....well, maybe not so much


Phoning it in Again
Posted by jurassicpork | 12:55 PM 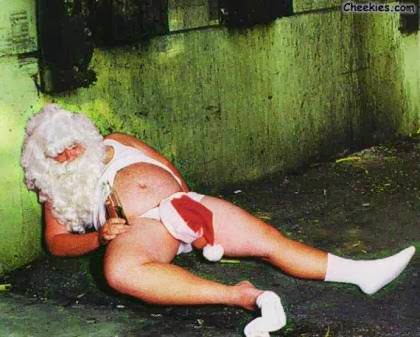 This also happens to be my Twitter avatar for the rest of the year, although I must say I've been a bit more productive than this incarnation of Santa Claus. You'll make my nice list if you mail this to Megyn Kelly at Fox.
Anyway, with Scott Carson, Buffalo Bull, Annie Oakley, Sitting Bull and Arthur Conan-Doyle chasing down Jack the Ripper throughout the East End of London in the denouement of Tatterdemalion, plus doing the usual Christmas thing and keeping the household running, there's been no time for real-time blogging (although I've got the annual bizarre Christmas present post in the can plus I've been chipping away at Assclowns of the Year #3). So please accept this substitute for actual political/social commentary.
A suggestion for guys planning on having Christmas sex: Take off the ribbon first. Your lover will appreciate it later.
@EWDolan Megyn Kelly doubles down on ‘white Santa ’: I did it for the kids.* *Psst. The white ones.

Next I expect to hear Fox airhead Megyn Kelly try to claim Jesus was born not in Bethlehem but Grosse Point, Michigan. #RWNJs #p21 #p2 #tlot

#PraytoEndAbortion because Paul Ryan can't cut food stamps for a dead fetus. #RWNJs #p2 #p21
Drone kills 15 in Yemen on way to a wedding. Obama administrations says, "They were probably wedding crashers." http://rt.com/news/yemen-strike-drone-wedding-161/ … #p2
#embracethesuck and let's replace Alan Grayson with Allen West since that worked out so well last time.
Is sending a fruitcake to a #Republican at Xmas passive/aggressive?
With the #GOP threatening to cut SNAP again, cancer research funding & cutting UI, I can see them charging us for the coal in our stockings.
Instead of his uncle, maybe Kim Jong Un should've executed his barber, tailor and fitness trainer. #justsaying #toosoon?
#PraytoEndAbortion I'm praying to end the abortion that's known as the 113th Congress. Does that count? #RWNJs #p2 #p21
Look at old films from 70, 80, 90, 100 years ago. You'll never see an obese person. Ever. Nowadays, even our ferrets are fat.
@ChuckTodd always struck me as Jimmy Fallon's stupider, pudgier, more evil older brother.
@averyfbodie Maybe that's why Texas hasn't seceded. If they do, they'll automatically qualify as a Third World country.
I wonder how many redneck Aryan types are following @WhitePartyWeek because they think it's a White Supremacy kegger?
@Scribd's new "update" with the semi-covers looks like half-assed censorship. Who heads up their Engineering Dept? The American Tourister gorilla?
Santa Claus is the one guy on the planet who works fewer days a year than Congress.
@Twitter: "Oh, you don't want to follow these idiots? How about this guy if I recommend him to you three simultaneous times?" #FuckTwitter
@jilevin Every time Sandy Rios opens her mouth, someone should light a match afterwards. The woman has flatulence of the intellect.
Gals, banishing a guy to the #friendzone is like promising him a five course dinner at the Four Seasons then dumping him off at Denny's.
Michael Jackson's doctor. #ThingsMoreUsefulthanthe113thCongress
0 comments