Brilliant Recent Posts
Caption Contest
Dear Scott Adams, Love Dilbert, but you're blamin...
Top 10 Signs Walmart's Mistreating its Workers
We Have Met the Tea Party and It Is Us.
Sisterhood is powerful....well, maybe not so much
Thought Salad
Greetings from the Land of the Walking Wounded
Rules for a 21st Century War
Before...
Blog Postcards From the Edge (A B@B exclusive)


Thanksgiving Misgivings
Posted by jurassicpork | 10:20 AM 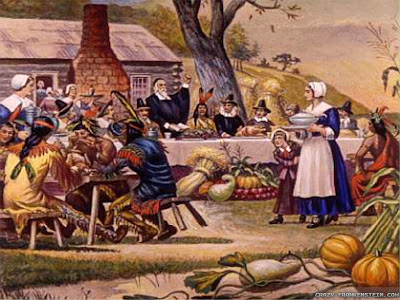 Unfortunately, Squanto wasn't psychic. If he was, think of all the misery he could've saved his people.
But he wasn't. The Indians around Plymouth Rock, Massachusetts took pity on the settlers from the Mayflower and essentially kept them alive. Over the next four centuries, we repaid them with venereal disease and small pox, massive land grabs, raids, fascist resident schools and shunting them to reservations.
Because that's the way of the White Man and his Manifest Destiny.
And we're still seeing the same spirit today in mostly white corporate executives who have nothing left to steal from Native Americans and have moved on to the rest of us. Now they're after our pensions, our health care, our very dignity and will to live and fight. A cabal of 150 corporate executives, one of them Obama's jobs czar Jeff Immelt, called "Fix the Debt" is now busting a nut trying to raise the retirement age to at least 70, get rid of overtime pay, grab what few pension funds there are, freeze the minimum wage and God knows what else. Many of these corporate scumbags already have retirement funds of $140,000,000 or more.
Now, K-Mart, Walmart and, for the first time ever, Macy's is open today for business as well as hundreds if not thousands of retailers. K-Mart opened at 6 this morning and will be at it for 41 straight hours and who cares if their employees want to spend Thanksgiving with their families? According to the propaganda campaigns of these corporations, it'll be a "high energy day" for "associates" who just can't wait to forgo spending a major holiday with loved ones to wait on manic, murderous customers who would stick a shiv between their mother's ribs to get that extra 20% off on a plasma TV.
You think a single retail executive in this country is working on Thanksgiving?
And now, like the original colonists of 1620, many of us are fighting for bare survival. Only it seems there's no Squanto to save us from certain ruin. Our government quietly let the ARRA or Recovery Act lapse, leaving millions with less food assistance and no subsidization for their COBRA health coverage and millions will lose their unemployment benefits unless Congress acts because they simply don't give a shit about you. If you can't stuff millions in soft PAC money into their war chests, unless you can wine and dine them at the Four Seasons or the Pump Room or some other swanky restaurant, if you don't hold $10,000-a-plate fundraisers or foot the bill for golf junkets at St. Andrews, they want nothing to do with you. It is a government of the 1%, by the 1% and for the 1%.
Like the executive scum who've sent the word down to the regional, district and store levels that if you don't work on Thanksgiving, you're fired.
So, Squanto and his people are dead and gone and most of their descendants can't even help themselves let alone us, not that they'd want to. We have just each other, fellow human beings who are compassionate enough to look beyond our ken and to sympathize with the plight of others less fortunate than we. A certain Walmart store in Canton, Ohio proved that recently.
And if you're lucky as I am to be spending a quiet, peaceful Thanksgiving with a loved one or loved ones, please give a silent prayer or gesture of thanks to the people who are braving termination, ridicule and the cold protesting the ongoing theft by the 1% of our most basic ways and means of survival. Because they don't care about you any more than do their temp workers in the federal government.
0 comments