Brilliant Recent Posts
Dear Scott Adams, Love Dilbert, but you're blamin...
Top 10 Signs Walmart's Mistreating its Workers
We Have Met the Tea Party and It Is Us.
Sisterhood is powerful....well, maybe not so much
Thought Salad
Greetings from the Land of the Walking Wounded
Rules for a 21st Century War
Before...
Blog Postcards From the Edge (A B@B exclusive)
Blogrollling In Our Time: Are You SURE You Want T... 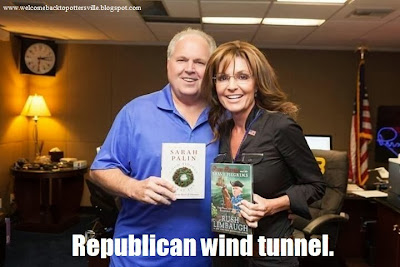 Sometimes, captions just write themselves. Doesn't stop me from trying, though. But this caption should warm the cockles of any liberal heart sick to death of seeing bilge pumped out annually by right wing nut bags who still get put on our nation's bookshelves. Plus, there's something stomach-churning about an increasingly dirty-minded, sex-obsessed pedophile like Rush Limbaugh writing a children's book. Maybe he should've entitled it, "How I Spent My Summer on Hispaniola" and Palin could've named her holiday book, "A Child's Christmas and Wails."
So, shame me. Show me what you got and if I like it, I'll use my Paint program to put your caption in a future post.
3 comments

Anonymous said...
"Men In Green Faces" based on a Navy SEAL's two tours in Vietnam.

Anonymous said...
No caption but is the ceiling tile above Rushbo displaced because that's where he hides his stash?
11/25/13, 6:19 PM

Southern Beale said...
Sometimes I have to remind myself that this woman actually held a high elected office.

I mean, my god. I don't live in Alaska but what the hell were they thinking?
11/26/13, 3:36 PM
Post a Comment
<< Home
Contact
Home
Email:
brilliantatbreakfast at gmail dot com
RSS