Brilliant Recent Posts
Sisterhood is powerful....well, maybe not so much
Thought Salad
Greetings from the Land of the Walking Wounded
Rules for a 21st Century War
Before...
Blog Postcards From the Edge (A B@B exclusive)
Blogrollling In Our Time: Are You SURE You Want T...
May the Odds Be Ever in Our Favor
McHammered
Alan Grayson Was Right. Is This Really up for Debate?


We Have Met the Tea Party and It Is Us.
Posted by jurassicpork | 12:53 PM
(By American Zen's Mike Flannigan, on loan from Ari.)
"People call me a socialist sometimes, but you’ve got to meet real socialists, and you’ll have a sense of what a socialist is. I’m talking about lowering the corporate tax rates. My healthcare reform is based on the private marketplace. Stock market is looking pretty good last time I checked... My simple point is this. If we can get beyond the tactical advantages that parties perceive in painting folks as extreme and trying to keep an eye always on the next election, and for a while at least just focus on governing then there is probably seventy percent overlap on a whole range of issues." - Barack Obama, November 19, 2013
Yesterday, at the annual Wall Street Journal CEO Council meeting, Barack Obama showed just what a master of deception he's been since he was a Senator by coming clean with the well-heeled. In his 46 minute-long speech, he essentially, as Jason Easley points out, "shreds Republicans" for calling him a Socialist. But, while I've admired my colleague Mr. Easley for years, as with virtually all liberals on "the professional left", he completely misses the point. And he begins doing this by failing to note that Obama has done far, far more for the 1% than he has for the bottom 99%.
Basically, what Obama had said was, "Hey, guys, I'm one of you! Look at all I've done for you and this is how you pay me back?" No doubt, the upholstered cellulite in attendance walked away at the end of the President's 46 minute-long speech still clinging to their beliefs that Mr. Obama is still redder than Karl Marx's asshole.
But Easley falls into the same trap as even more misinformed people who are cheering this man on as if he was the greatest thing to come out of Hawaii since Don Ho. Spend just five minutes on Twitter or Facebook and you'll be inundated with all sorts of clever little memes such as this one: 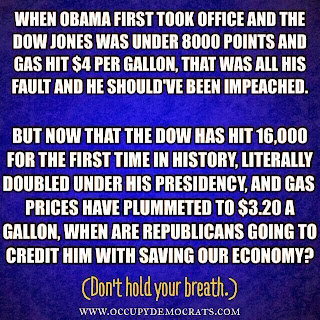 Anonymous said...
Terrific Essay! Every Democrat, liberal, and/or Obama supporter should be forced to read and seriously confront the issues within. This makes it plain to see that it's very true that in years past Obama would be a Republican. Perhaps if they hadn't turned into a raging gaggle of racist fundamentalist Luddites in the past 30 years we could have an actual progressive party for, of, and by the workers and not instead be captured by the modern Democratic establishment in our 2 party system.
11/29/13, 6:21 AM
Post a Comment
<< Home
Contact
Home
Email:
brilliantatbreakfast at gmail dot com
RSS