Brilliant Recent Posts
How Much Wood Can the Log Cabins Chuck?
Just checking in
The Terrorists Haven't Won... Yet.
Has it Really Come to This?
A Birthday Present I Don't Need
The NRA Has Asperger Syndrome
Christmas 2012
Xmas, 1914-5
Caption Contest: Xmas Edition
If it Bleeds it Leads, So Let it Bleed


We Need a Good Samaritan Law For Wall Street
Posted by jurassicpork | 3:46 PM 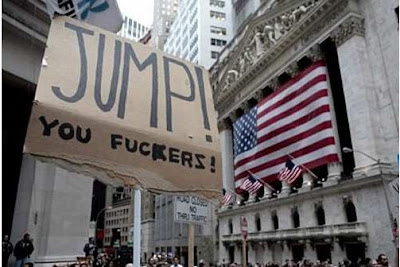 I'm sure many if not all of you have heard of Good Samaritan laws that protect wouldbe guardian angels from being sued if they save the life of a victim of a heart attack. I've heard stories of people who'd actually sued their life-saving benefactors for cracking their ribs while doing chest compressions or crimping their ascot or some such nonsense. Good Samaritan laws were then put in place to curb the rise of frivolous and audacious tort lawsuits so that health care givers coming across victims are given immunity from lawsuits and in some cases even exonerated from not offering life-saving aid.
We need such a law, an Act of Congress, actually, one that prohibits rapacious Wall Street behemoths from suing the federal government who'd, through us, bailed out the biggest and quite possibly most corrupt insurance giant in the country to the tune of $182,000,000,000. Yet this is what AIG's executive board will vote on tomorrow morning. They're actually thinking of suing Uncle Sam for the $25,000,000,000 they claim their shareholders lost during the bailout that saved their asses at a time when 60% of their share price tanked in one day over four years ago.
AIG's shareholders want to launch this lawsuit for about half what Bill Gates' fortune is because they claim the bailout that obviously saved the company cost them tens of billions. Obviously, they were compensated to some degree and I seriously doubt if any of those shareholders took a big enough hit so they had to weigh the value of single vs double ply toilet paper. Just as obviously, they wouldn't have gotten dog shit if We the People hadn't involuntarily stepped in to bail out their fat, corrupt asses.
Actually, a private lawsuit was already filed two years ago by the 87 year-old former AIG chief Maurice Greenberg, who automatically wins the Henry Potter Prize for the most rapacious and avaricious octogenerarian on earth. Greenberg's hope is that AIG's board will tomorrow join in with his lawsuit because their corrupt investors are owed fealty by the board of directors. It's hard to fathom how much of that $25,000,000,000 Greenberg thinks he'll live long enough to spend but one thing remains clear: Just when you think the federal government is filled with more grasping, self-centered, ungrateful sociopaths than any entity on earth, a Wall Street firm like AIG comes out of nowhere to claim their place on the mantle.
This is the equivalent of throwing a life preserver to a drowning man who then sues you because the guests on his boat were detained by your act of heroism and made late for dinner at a 5 star restaurant. Obviously, this will have a chilling effect on any other Wall St. firm that needs bailing out in the future (even though Section 6 of the TARP bailout allows the incumbent Treasury Secretary to buy up another $700,000,000,000 of corporate debt without any oversight). If this sets such a precedent, the federal government will think twice before bailing out these sociopaths. Which would be a very, very bad thing for Wall Street, not so bad for the Main Street that would be forced to fund another bailout.
So this goes out to Greenberg and the AIG board: Please, proceed, ladies and gentlemen. Try and sue the government and see what happens next time your corruption catches up to you and your precious shareholders. Then maybe Congress will get smart and allow you go the way of Lehman Brothers and Bear Stearns by relegating you to the shit hill of corporate history.
1 comments

squatlo said...
Remember the old story about the scorpion and the frog? It's their "nature" to be outraged by our insufficient handout.

When we start incarcerating these bastards in the same numbers that we lock up crackheads and pot smokers, then you'll see some semblence of humility for their crimes.
1/9/13, 1:42 PM
Post a Comment
<< Home
Contact
Home
Email:
brilliantatbreakfast at gmail dot com
RSS