Brilliant Recent Posts
Christmas 2012
Xmas, 1914-5
Caption Contest: Xmas Edition
If it Bleeds it Leads, So Let it Bleed
A Moment of Silence For Newtown
And Something Warm To Cling To
Around the Blogroll and Elsewhere: Again and agai...
The pigeonholing of Adam Lanza
If not now, when?
In the Love Of the Common People


The NRA Has Asperger Syndrome
Posted by jurassicpork | 1:08 PM 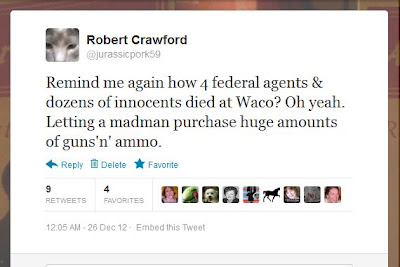 Asperger syndrome (AS), also known as Asperger's syndrome or Asperger disorder, is an autism spectrum disorder (ASD) that is characterized by significant difficulties in social interaction, alongside restricted and repetitive patterns of behavior and interests - Wikipedia

Listening to the National Rifle Association's Wayne LaPierre blather on about more guns in the hands of teachers, armed guards in our elementary schools and how video games are to blame, I'm frankly amazed that no one's drawn the connection and accused the NRA of having Asperger Syndrome. After all, their social clumsiness, inability to take social cues from other humans and repetitive behavior and speech are part and parcel to the autism that supposedly afflicted Newtown shooter Adam Lanza.
Aside from paying what was obviously lip service to the tragedy at Sandy Hook Elementary that saw 20 children aged six and seven and eight adults put into early graves, the NRA stubbornly refuses to meaningfully take some guidance from the unmistakable social cues from even pro-gun conservatives and parents in general. Still, LaPierre blathered on about gun rights and trying to deflect the blame to video games that are played by millions of citizens in many countries that don't blow each other away to the tune of tens of thousands every year as we do. 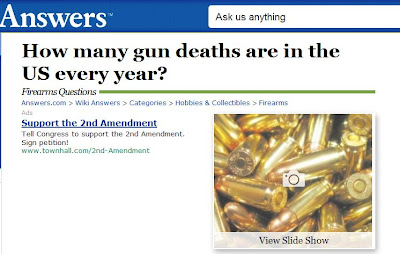 They still couldn't get a clue even after learning, as they surely should have, that during LaPierre's presser, a gunman in Pennsylvania was walking up and down a street and randomly shooting at people before he himself was killed by police. The death toll of that spree killing was four, small potatoes, obviously, to an NRA that plainly looks at civilian deaths as acceptable collateral damage regardless of the extreme youth of the victims. It's the fault of Asperger's sufferers, it's the fault of video games, it's the fault of violent movies, it's everyone's fault but their agenda's.
Five days ago, Slate Magazine did a study to see how many reported gun fatalities that have taken place in the US since Newtown on December 14th. The result was over 120, even though that list is far from exhaustive. Here's another horrifying statistic: According to the Brady Center's website, nearly 100,000 Americans have been shot thus far this year, with, as of this writing, 146 shot today, the day after Christmas, alone.
The genesis of this ongoing rage against our fellow Americans, obviously, stems from a highly volatile combination of fear and the spiritual Viagra a gun puts in those who hold one, especially for the first time. As Homer Simpson said at a gun shop, "When I held that gun in my hand, I felt a surge of power... like God must feel when he's holding a gun."
And the NRA's stubborn refusal to bend to the changing zeitgeist is very typical of Asperger patients, pathologically repetitive behavior that gives such gems as the answer to gun violence is more guns, which is like pouring gasoline on a fire to douse it. Six days ago, the small town of Harrold, Texas allowed teachers to carry firearms in the schools, a measure that Michigan's viciously right wing governor vetoed at the last minute when the legislature in Lansing voted to do the same. In Newt Gingrich's hometown of Kennesaw, Georgia, it was mandated 30 years ago that its citizens own at least one gun.
And, despite Newtown and the president's impassioned but typically vague promise to do something about this, nothing significant will change. The media will not undergo a paradigm shift and all mutually promise each other and us that they will stop the fear-mongering. The NRA will not call for stricter gun control measures. We will not stop buying guns and ammo in bulk, especially as the government provides massive loopholes, and is forbidden from tracking firearms sales and likewise is passively watching all this brisk, frenetic activity at gun shops and gun shows and carrying over its gun-walking, Fast and Furious operations onto our soil. We're too entrenched in what passes for our collective belief system, as if we Americans as a whole have Asperger's.
Waco was brought about when a lunatic leader of an apocalyptic cult known as the Branch Davidians bought so many guns and so much ammo it eventually got the attention of the BATF. After waiting for Koresh and company to stockpile an enormous arsenal and ammo dump, they then knocked on his door and four agents paid for it with their lives. The standoff, and the FBI's botched response, cost many dozens more their lives, including, yes, 20 children (the same student death toll as Newtown) under the age of 18. The siege eventually claimed 80 lives. That was nearly 20 years ago yet we're still hearing about people like the lunatic in Indiana who bought $100,000 of ammunition and nearly four dozen guns and was only turned up and apprehended when he threatened to shoot up an elementary school just two days after the Newtown massacre.
The government in general and most any administration is typically loathe to federalize laws that apply to all 50 states. But as with gay rights, the minimum wage, judicial sentencing and ALEC-inspired "Stand Your Ground" laws that have virtually become a license to kill, gun control, such as it is, is a patchwork quilt of laws, make believe laws and no laws that varies from state to state. As stated earlier, a small town in Georgia mandates carrying a firearm while New York City, home of some of the strictest gun control laws in the nation, has for decades forbidden citizens from owning and carrying guns within city limits.
Considering that 100,000 Americans get shot and over 30,000 die from gunshots annually, exponentially more than all the other industrialized nations of the world combined, this is one issue on which the federal government should take point and codify at the federal level.
4 comments

Anonymous said...
"Brainiac?" Not so much. Thanks for jumping on the "using Aspergers as an insult and/or negative term" bandwagon.

What many gun owners are could be better defined as gun perverts. They make a fetish of their guns. They take their guns out and oil them. They take a long rod, insert it into the barrel of the gun and push it back and forth, back and forth – they say to clean it. The similarity between what happens when a gun fires and an orgasm is self-evident, except that the gun firing creates a more powerful burst that travels further and at a higher velocity. Thus the feeling of power to those who otherwise would feel politically and socially impotent.

Like perv rapists and child murderers, gun perverts have a tendency to blame the victim, as in, "if the victims had taken the trouble to arm themselves, they'd still be here."

Even when one of the gun perverts kills himself, he usually does it by fellating the barrel and pulling the trigger.

They are gun perverts. Perverts. Perverts. If sexual child abusers tried to lobby our lawmakers, we would very quickly find ways to toss them in the pokey. Let's do the same with the perverts who are having affairs with their guns.

jurassicpork said...
You can't argue the NRA collectively presents these symptoms. I never said Asperger's was evil, so kindly refrain from comparing me to the right wing nut jobs who are jumping on it in order to deflect from the issue of the necessity of better gun control, OK, bubby? Thanks.
12/27/12, 1:27 PM

Charlie O said...
You are completely off base about Waco. It's a poor argument for gun control. Waco is a good argument for law enforcement control. Waco was caused by the the ATF not David Koresh. They launched a military operation against the Branch Davidians for no good reason. The local sheriff even asked why they didn't simply go knock on the door. Or apprehend Koresh outside the compound, which he frequently left. The ATF got what it deserved that day.
12/31/12, 12:10 PM
Post a Comment
<< Home
Contact
Home
Email:
brilliantatbreakfast at gmail dot com
RSS