Brilliant Recent Posts
Just checking in
The Terrorists Haven't Won... Yet.
Has it Really Come to This?
A Birthday Present I Don't Need
The NRA Has Asperger Syndrome
Christmas 2012
Xmas, 1914-5
Caption Contest: Xmas Edition
If it Bleeds it Leads, So Let it Bleed
A Moment of Silence For Newtown


How Much Wood Can the Log Cabins Chuck?
Posted by jurassicpork | 12:16 PM 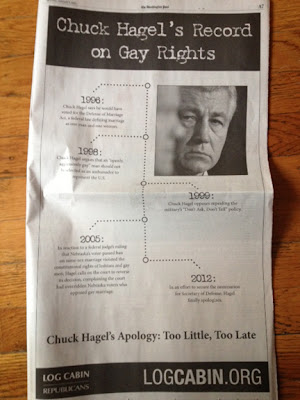 Let's get one thing straight: I never liked Chuck Hagel. I was never impressed about him volunteering to fight in a clearly unjust war in Southeast Asia. He's a typical right wing homophobe and Obama nominating him to head up the Pentagon is just another wearisome sign that he will never wean himself from the right wing douchebags that have largely gotten us into the seemingly insoluble fix we're in. Tolerating Chuck Hagel when he was in the Senate was like tolerating getting Hepatitis B because it's still better than having Hepatitis C.
But, speaking as a bisexual liberal in semi-permanent exile, the Log Cabin Republicans' sudden opposition to Hagel largely if not entirely because of an antigay remark he'd made almost 15 years ago (and for which he's subsequently apologized) reveals their loathsome double standards and conveniently-timed pro-LGBT stance. It's an inexplicable move condemned by even the moronic Chris Barron, the co-founder of GOProud, another right wing gay rights group, one that was barred from last year's CPAC. They'd gone as far as to take out obviously expensive full-page ads in the Washington Post and the New York Times.
It ought to be mentioned, although I get the dry heaves at the thought of even typing out his name, that Mitt Romney, the virulently anti-gay former Governor of my state, enjoyed their endorsement. This is a guy who sought to block gay marriage in Massachusetts both before and after its ratification and, after avoiding them for weeks, listened to gay rights activists with sociopathic indifference to their concerns and was actually surprised to hear some gay couples had families. And yet the Log Cabin Repubs thought they'd get a better deal with a typically homophobic, Mormon psychopath than an incumbent who'd endorsed marriage equality (albeit belatedly and only after Joe Biden painted him into a corner). Really, now, guys?
These self-loathing morons might as well have taken out their full-page ad in the Washington (Moonie) Times. When are they going to realize they will never be embraced by the conservative establishment (such as it is) EVER? I don't recall them ever bitching and moaning about homophobes being appointed to one post after another during the Bush years. But a 15 year-old remark by a former senator is now suddenly relevant? Aren't these the same right wing lunatics who keep telling us, "It's old news", "Respect our privacy" and "Let's turn the page"? I guess the rules change according to the letter after the president's name.
Note to the Log Cabin Republicans: You will NEVER be accepted in the embrace of the homophobic GOP, even among those who have yet to come out. These are the same people who'd barred GOProud from last year's CPAC and will surely do so again next month. And you have many more allies among liberals than you EVER will in conservative circles.
And it utterly mystifies us liberals who support the equal rights for all LGBT people, including, yes, conservatives, why you persist in hitching your wagon to a political party that would love nothing more than to sever ties with you. You are loathed by your political brethren, ignored by even outed and closeted gay Republicans and as a whole, the entire conservative movement would love nothing more than to see you consigned to the flames of Hell once promised by Jonathan Edwards.
No one's saying you can't hang on to your core conservative beliefs. But you need to wean yourselves from a political party that's notoriously hostile to you and has, at the very least, worked tirelessly and fought tooth and nail to deny you those rights pursued in your convenient, erstwhile gay rights agenda. And anything other than completely and permanently separating yourselves from what's obviously a toxic political party does not make the slightest bit of sense and makes you just as screechingly incoherent as the GOP that loathes you as much as it does liberals and Democrats.
1 comments

Southern Beale said...
I'll take what the Log Cabin Republicans have to say seriously when they start actually addressing the raging homophobia and intolerance in their OWN party first. Until then, STFU.
1/10/13, 12:23 PM
Post a Comment
<< Home
Contact
Home
Email:
brilliantatbreakfast at gmail dot com
RSS