Brilliant Recent Posts
We Need a Good Samaritan Law For Wall Street
How Much Wood Can the Log Cabins Chuck?
Just checking in
The Terrorists Haven't Won... Yet.
Has it Really Come to This?
A Birthday Present I Don't Need
The NRA Has Asperger Syndrome
Christmas 2012
Xmas, 1914-5
Caption Contest: Xmas Edition 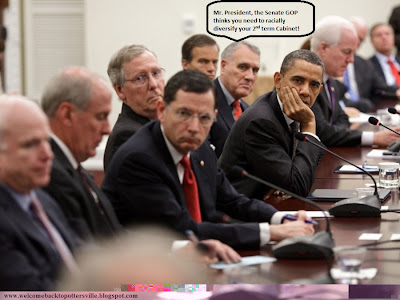 Seriously, trying to explain people of color to the Republican party is like, well, you know...
I mean, how much chutzpah does it take for a political faction that looks like 50% Off Day at a Brooks Brothers outlet to chide an African American president for not making enough racially diverse nominations for his second term Cabinet? And don't forget, this is a party that had protested Susan Rice's nomination for Secretary of State before Obama had even made the nomination.
And, as Joan Walsh had recently pointed out on MSNBC, if the Cabinet nominations uncomfortably remind the Senate Republicans of themselves, they have only themselves to blame.
1 comments