Brilliant Recent Posts
Leave Seth Alone!
"Mr. Wonder, Mr. Orbison, This is What Color Looks...
We Need a Good Samaritan Law For Wall Street
How Much Wood Can the Log Cabins Chuck?
Just checking in
The Terrorists Haven't Won... Yet.
Has it Really Come to This?
A Birthday Present I Don't Need
The NRA Has Asperger Syndrome
Christmas 2012 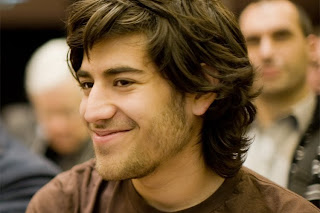 We are so numbed to death these days that sometimes it seems the only time human loss affects us if it's either someone in our immediate circle, or the mass slaughter of innocents.

Perhaps it's a function of still being emotionally raw after having spent most of the holiday season going through old photographs and throwing away hundreds of photographs of my mother's entire life over the years from 1972 to 2000, keeping only the best photographs and representative photos of her various and sundry dogs. But reading yesterday of the suicide of Aaron Swartz at the age of twenty-six just knocked me flat.

It isn't that I knew Aaron Swartz personally. In fact, I had no idea who he was until I started seeing the above photograph everywhere I looked; a photograph that at one time my mother would have showed me and said, "See? Now someone like THAT would be a nice boy for you." But part of what I've been going through while looking at the documentation of my mother's life is seeing photographs of her in her teens and early twenties, and then thinking about the wreckage she made of herself, of her second marriage and her life after her husband's passing, and wanting to take that girl from the late 1940's and knock some sense into her. And after reading who Aaron Swartz was, I want to smack him across the face too and say, "SCHMUCK!! You're a fucking genius! How DARE you take that mind away from this world!

For my fellow unitiated, here's who Aaron Swartz was, from Cory Doctorow over at BoingBoing:

I met Aaron when he was 14 or 15. He was working on XML stuff (he co-wrote the RSS specification when he was 14) and came to San Francisco often, and would stay with Lisa Rein, a friend of mine who was also an XML person and who took care of him and assured his parents he had adult supervision. In so many ways, he was an adult, even then, with a kind of intense, fast intellect that really made me feel like he was part and parcel of the Internet society, like he belonged in the place where your thoughts are what matter, and not who you are or how old you are.

Aaron had powerful, deeply felt ideals, but he was also always an impressionable young man, someone who often found himself moved by new passions. He always seemed somehow in search of mentors, and none of those mentors ever seemed to match the impossible standards he held them (and himself) to.

This was cause for real pain and distress for Aaron, and it was the root of his really unfortunate pattern of making high-profile, public denunciations of his friends and mentors. And it's a testament to Aaron's intellect, heart, and friendship that he was always forgiven for this. Many of us "grown ups" in Aaron's life have, over the years, sat down to talk about this, and about our protective feelings for him, and to check in with one another and make sure that no one was too stung by Aaron's disappointment in us. I think we all knew that, whatever the disappointment that Aaron expressed about us, it also reflected a disappointment in himself and the world.

Aaron accomplished some incredible things in his life. He was one of the early builders of Reddit (someone always turns up to point out that he was technically not a co-founder, but he was close enough as makes no damn), got bought by Wired/Conde Nast, engineered his own dismissal and got cashed out, and then became a full-time, uncompromising, reckless and delightful shit-disturber.

There's more, from one of the people actually qualified to write about this young man.

But in case the utter waste of a fine mind doesn't make you angry enough, go read about how the Federal government had decided that because he broke into MIT and used his laptop to release hundreds of subscription-firewall scientific documents, he should be prosecuted to the fullest extent of the law.

I'm no advocate for lawbreaking or piracy or anything else. I used to use BugMeNot.com to get around subscription firewalls like most people did, until I was laid off in 2008 and deluded myself for about five minutes that I should actually get paid for writing and realized the inconsistency of trying to get around revenue streams. But ten felony counts? Seriously? While Jamie Dimon, Vikram Pandit, Angelo Mozilio, and Lloyd Blankfein walk free? A kid in his early twenties is an adherent to the "Information wants to be free" movement and you want to put him in prison for fifty years while the men who architected a global near-economic-collapse are free to do the same shit again? And this wasn't under George W. Bush's Total Information Awareness Big Brotherism; this is Barack Obama's and Eric Holder's Justice Department that did this, and in the course of doing so, arguably hounded a twenty-six-year-old genius to death.

And they say they want this country to be more educated.

The New York Crank said...
The Obama Administration's record on civil liberties is spotty at best, and I'm not inclined to give them an At Best Award.

This case is just one spotted example. Treatment of undocumented immigrants is another. Surveillance of civilians without a court warrant is a third. Keeping Guantanamo open and sidestepping Federal Courts for terrorist trials is a fourth. I've probably missed a few.

The problem is, Presidential elections inevitably lead us to choose between a bad choice and a worse choice. Romney would have been a calamity. So, I suppose, with Mr. Obama in office, we should be glad we only have a tragedy.

Cirze said...
The only education I've noticed them supporting for the last decade plus is education for people going overseas to run companies that further enrich those who ship the jobs there.

This intelligent young man undoubtedly knew all of this history all too well.

jurassicpork said...
Careful, Jill, or you'll run afoul of your Obamabot readers. I'm living proof of how ugly that can be.

Of course, my next article, which will be about Swartz, posted here, will really make their pointy heads explode.
1/15/13, 10:33 AM
Post a Comment
<< Home
Contact
Home
Email:
brilliantatbreakfast at gmail dot com
RSS