Brilliant Recent Posts
Fear and Loathing on the Appian Way
Greetings from one of the people Willard Rmoney ju...
Diplomacy is Not an Option
Chickenhawks
Pic o' the Day
In case you missed this
Around the blogroll and elsewhere: Is it really l...
Top Ten Reasons Not to Vote For Mitt Romney
September 11th Redux
What I miss most is time


Probably because his petzele is the size of a pretzel
Posted by Jill | 6:44 PM
Looks like Paul Ryan has been lying about his Übermenschhood again:

In case you haven’t heard, Paul Ryan works out. A lot, apparently; he’s so much of a “fitness guy,” as he’s said, that for days after Mitt Romney chose him as his vice-presidential candidate, the media could talk about little else but the fact that Ryan leads a group of congressmen in a daily workout called P90X, a hugely popular, high-intensity workout routine with a cultlike following.

The legend of Paul Ryan’s physical fitness got even crazier when the boy-wonder V.P. candidate bragged to Hugh Hewitt about his marathon running, claiming he’d run the 26.2-mile race in “under three [hours], high twos. I had a two hour and fifty-something. … I was fast when I was younger, yeah.”

Of course, we now know that was a lie. As Runner’s World discovered, Ryan’s time was 4:01:25, and as a Ryan spokesman admitted, it was his one and only marathon. He was 20 when he ran it, and yet he still would have lost to a 40-ish Sarah Palin. Whoops. Diehard runners were ticked off, of course, and the Ryan marathon soon became a punch line.

Left unexamined, however, was another, equally outrageous claim: That Ryan has 6 percent body fat. This was endlessly repeated at the time of his selection—trumpeted in headlines (both here and abroad) and even in editorial-page cartoons. “Oh, to be a pair of calipers,” swooned Jon Stewart on The Daily Show. “Paul Ryan shirtless” became one of the most popular Internet searches—despite yielding only one softish vacation photo—which makes it all the more strange that nobody has taken a closer look.

But the more you look at Paul Ryan, the less he looks like Francisco D'Anconia and the more he looks like the guy who got sand kicked in his face in 1950's Charles Atlas ads: 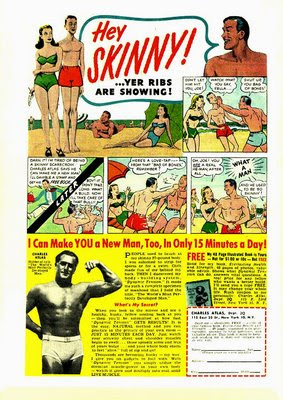 Turns out that just about the only people with body fat this low are Olympic 100-meter sprinters and Tour de France cyclists. Now if Paul Ryan really is this fit, we have to wonder just how much time he spends representing the constituents in his Congressional district, which may be why Rob Zerban is presenting a very real threat to Ryan's re-election (and you can help make Zerban an even bigger threat here). You just have to wonder just why Paul Ryan feels he has to lie about his physical prowess so much. I for one think the same thing that I think when I see some guy tailgating me in a Hummer: "Do you really want to advertise what a pencil-dick you are?"

Jimbo said...
Your captcha is totally ridiculous. Mostly totally unrecognizable, especially the "number" part. Really, it took me 5 times to get through. Unless you are actively trying to discourage comments.
9/18/12, 11:07 PM

Elliot MacLeod-Michael said...
I didn't know the fact about Palin besting his actual marathon time in her 40's and I thank you ever so kindly for bestowing upon me that piece of trivia gold.
9/20/12, 6:04 PM
Post a Comment
<< Home
Contact
Home
Email:
brilliantatbreakfast at gmail dot com
RSS