Brilliant Recent Posts
Greetings from one of the people Willard Rmoney ju...
Diplomacy is Not an Option
Chickenhawks
Pic o' the Day
In case you missed this
Around the blogroll and elsewhere: Is it really l...
Top Ten Reasons Not to Vote For Mitt Romney
September 11th Redux
What I miss most is time
Forget what the Republicans tell you...the truth i...


Fear and Loathing on the Appian Way
Posted by jurassicpork | 11:14 AM 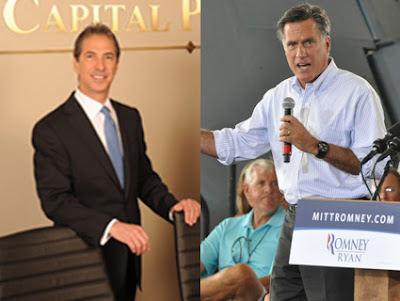 Or, When in Republicanistan, Don't Do As the Romans Did

(A Brilliant at Breakfast exclusive by American Zen's Mike Flannigan, on loan from Ari and JP at Pottersville)

There are 47 percent of the people who will vote for the president no matter what... (T)here are 47 percent who are with him, who are dependent upon government, who believe that they are victims, who believe the government has a responsibility to care for them, who believe that they are entitled to health care, to food, to housing, to you-name-it. That that's an entitlement... These are people who pay no income tax... My job is is not to worry about those people. I'll never convince them they should take personal responsibility and care for their lives." - Professional tax-dodger and flip-flopper Willard Romney, Emperor-Forever-in-Waiting

Perhaps it's unfair of this writer to constantly make comparisons to the jigglingly bloated Republican Party and its financial backers/employers to ancient Rome. Sure, Rome eventually collapsed under the weight of its own complacency, apathy and arrogance. When the name of Rome is mentioned, we generally think of two things: Magnificence and fatal corruption.

It's Rome's magnificence I choose to write about today. Unlike the latter day Republican Party, Rome knew the importance of infrastructure. During Rome's Golden Age under Augustus, Titus, Trajan, etc., the idea was to outdo the previous emperor whether it be a new Forum, the Flavian Amphitheater, baths or temples. The idea (and this seems to have been lost on Nero, who set fire to much of Rome so he could make an eminent domain land grab to build his bloated pleasure palace on which the Colosseum would eventually be built) was to show Roman might and engineering superiority while underwriting the costs through a progressive system of taxation intended to benefit the people.

Rome was also undeniably a slave state but the biggest difference between ancient Rome and the modern day slave state largely created by Republicans is that in ancient Rome, a slave or indentured servant stood a much better chance at earning or winning their future liberty. Surviving records from Rome, Pompeii and elsewhere in the ancient world give us accounts of more than a few slaves who'd won their independence, some of them becoming very wealthy.

In other words, ancient Rome, with all its fatal character flaws, more closely embodied the American dream than today's America. Anyone who's ever been trapped working for the same temp agency year after year toiling to the point of exhaustion or incapacitation in an Amazon warehouse or at a Wal-Mart for minimum wage knows what a mockery the American dream has become. It's a rotten, wilted carrot hung just beyond their noses on an ever-lengthening stick.

Rome built aqueducts that largely survive today, engineering marvels that, in lieu of pumps, used an ingeniously subtle system of gradation (13 inches for every mile) so that gravity fed Rome with fresh water for up to a million people. In fact, ancient Rome supplied itself and surrounding towns with more water than New York City until 1985. Most of the aqueduct system, contrary to popular belief, was actually underground, making the gradient that much more difficult to obtain. And the imperial Aquarius, or water bringer, a highly-skilled engineer, regularly made rounds to ensure there were no cracks or holes in Rome's enormous aqueduct system.

Today's Republicans care about as much for infrastructure or rebuilding as they do for the poor or job creation. Which is to say not at all.

Mitt Romney's speech, surreptitiously recorded at a $50,000 a plate fundraiser organized and hosted in Boca Raton by his fellow corporate raider, Sun Capital's Marc Leder, conclusively showed without a shadow of a doubt how much Willard Romney loathes nearly half the country he desperately wants to lead.

One can perfectly imagine Romney channeling Nero by setting fire to Washington, DC as the British did exactly 200 years ago and building a pleasure palace for himself on the ashes, turning the Reflecting Pool before the Washington monument into his personal swimming pool, the mall reserved exclusively for his Special Romney family Olympics and hiring Itzhak Perlman to fiddle while the Capitol burns. Because Romney is much closer to Nero than he is to Caesar, Augustus, Titus, Trajan or any of Rome's more progressive emperors.

And if Romney is Nero reincarnated, then his billionaire backer, Marc Leder, previously unknown before this video was leaked to David Corn at Mo Jo, is Caligula.

If nothing else, Romney's comments at least as far as the "47%" go prove that he is quite possibly the most insane man on the planet earth, a misanthropic one percenter who seriously believes (and it goes without saying Romney didn't know he was being recorded and could afford to speak "off the cuff") that the exact percentage of people likely to vote for Mr. Obama, 47%, also happens to be the percentage of people who do not pay taxes.

I think anyone who's ever been on unemployment or disability or working for minimum wage can tell you they're the last ones who can be called moochers and "victims" and dodge their taxes. Don't forget, this is a man who keeps the bulk of his quarter billion dollar fortune tucked away in seven foreign countries in so-called blind trusts in his wife's name and paid less than 14% in taxes in '10, the same man who steadfastly refuses despite calls from his own party to divulge more tax returns. Both Bushes, Cheney, John McCain and his own late father were more open with their tax returns than the man who refuses to release more than one.

And, whether it can be proved the 47% are indeed self-identified victims (of, say, the scummy initiatives of Leder's Sun Capital, which tried to get Uncle Sam to foot the bill for the pensions of Friendly's employees while Sun retained ownership of the New England restaurant chain), the ones who consistently whine about victims are Romney's 1% backers (hereafter referred to as the Haves and Have Not Enough).

It's Romney's backers like his degenerate bundler Leder who most consistently whine about corporations being saddled with the highest tax rate in the industrialized world (which, as Apple showed us recently, isn't exactly true), with their hired help in the GOP hoarsely screaming about extending the ruinous Bush tax cuts like medieval doctors sticking to their blood-letting course of treatment.

The very fact that this fatally incriminating video was shot by a waiter at the fundraiser last May shows with supreme schadenfreude that karma is a bitch and Romney's presser in California at 10 PM (EST) last night proved how embarrassed he was. As Lawrence O'Donnell said after Romney smirked and like an oleaginous Slinky slunk off to stage right while dodging further questions, "That is a desperate man in a desperate place."

Willard Romney is, to put it simply, without embellishment and without any attempt at humor, a human monster, a man who, like Nero, thought that affordable and adequate housing, food, and health care (which the president has made inroads to providing against all Republican opposition) are "entitlements." It was the perfect delineation of the sink or swim Randian style of economics that would solely guide a Romney-Ryan administration should the American electorate suddenly lose its collective mind and vote them in.
0 comments