Brilliant Recent Posts
In case you missed this
Around the blogroll and elsewhere: Is it really l...
Top Ten Reasons Not to Vote For Mitt Romney
September 11th Redux
What I miss most is time
Forget what the Republicans tell you...the truth i...
Déjà vu all over again
Let all the poisons that lurk in the mud hatch out
And here you have it.
Hackity hack hack hack hack hack 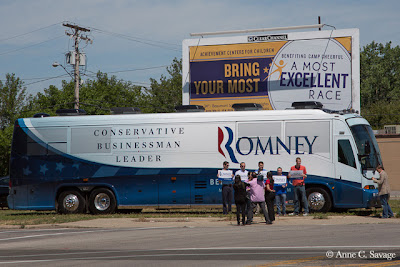 There's so much irony packed into this one photo, it irresistibly brings to mind the axiom of a picture being worth 1000 words. This is the Rmoney tour bus in his native Michigan, with barely enough supporters for a pickup basketball team. Note the message on the billboard behind it, which seems to mock the Rmoney campaign for not bringing its game. Then note the name at the top of the billboard: Clear Channel, which is owned by none other than Rmoney's Bain Capital.

It's pictures like this that seem to validate my opinion that about two thirds of all political campaigns are fueled by an impenetrable blanket of delusion. And no matter how much the corporate mainstream media may flog the dead nag of the Rmoney campaign, it will not turn this into the obligatory two horse race. There's one thoroughbred in this race and that's the virtually uncontested Barack Obama. Otherwise, how can the race for the White House be won by a guy who can't even carry his home state (Karl Rove's GPS Crossroads even pulled all ads from Michigan as well as Pennsylvania) and the one he used to govern?

Stick a silver fork in him. Rmoney's done.
3 comments

toma said...
You haven't apparently heard. The Muslims rioted and the Obama campaign is now in freefall. Because that's his core constituency, rioters and terrorists abroad. Vote for Romney before the shame becomes unbearable.
9/15/12, 7:25 PM

Anonymous said...
Now let's see, which one am I this week, a rioter or a terrorist? Ooohhhh, it's my off week, I get to be a Liberal commie! Free ice cream for all comrades!
:P
9/17/12, 9:09 AM
Post a Comment
<< Home
Contact
Home
Email:
brilliantatbreakfast at gmail dot com
RSS