Brilliant Recent Posts
September 11th Redux
What I miss most is time
Forget what the Republicans tell you...the truth i...
Déjà vu all over again
Let all the poisons that lurk in the mud hatch out
And here you have it.
Hackity hack hack hack hack hack
Caturday: It's not too soon to think about 2016
The best thing you will read about Gabrielle Giffo...
I may have to root for the Minnesota Vikings this ...


Top Ten Reasons Not to Vote For Mitt Romney
Posted by jurassicpork | 2:11 PM 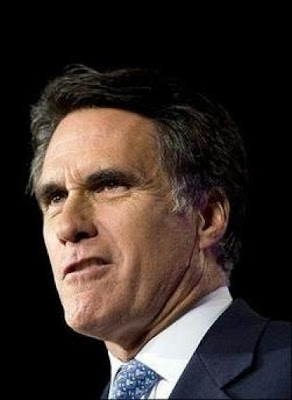 Mitt Romney is a political crash test dummy, an artificial life support system with a working mouth, a four-legged leatheroid briefcase. I'm sure that more than one psychiatrist or psychoanalyst who's been listening to him these past four years has come to the conclusion that Mitt Romney is a four star psychopath or sociopath, a man (for want of a better word) who simply cannot relate to real humans, a one-man gaffe factory the minute you take him out of a corporate boardroom. What follows below are ten actual quotes from Mitt Romney going back several years and you can decide, after reading these quotes, if this man deserves even a single vote this November.

10) "Corporations are people, my friend."

Last summer at the 2011 Iowa state fair, with another GOP presidential debate that same night, Mitt Romney lowered himself by catering to a heckler who was laughing at him for claiming that corporations are just like you and me, minus, of course, corporeal forms, the ability to love and show compassion, culpability and the 20-30% tax rate most of us are required to pay. By getting into a yelling match with a single heckler, Romney clung to an erroneously-interpreted 19th century Supreme Court ruling (rewritten by a court reporter who just happened to be employed by a railroad corporation) and showed for not the last time his more vicious side. Indeed, very much in keeping with other uptight Republican assholes, Mitt Romney shows emotion only when publicly challenged and ridiculed for his many bizarre statements.

If, in Mitt Romney's world view, corporations are people then small businesses are their red-headed stepchildren.

9) "I didn't know you had families."
In 2004 when he was Governor of Massachusetts, Mitt Romney at first refused to meet with David Wilson and Julie Goodridge, the two LGBT activists whose names became part of the court ruling that made Massachusetts the first state to adopt same sex marriage. Mitt Romney had publicly backed an amendment that would've blocked same sex marriage before it became a reality. After he was pressured into meeting with Wilson and Goodridge, Romney said, "I didn't know you had families," thereby showing a sociopathic disconnect so thorough that Romney couldn't even take the time to read and understand the ruling to which he was opposed and its humanistic reasons for allowing gay couples to begin their own families.

“He made clear that he was willing to listen to business leaders about the issue of family recognition. The impression was that if business leaders told him certain benefits and protections would increase the productivity of gay workers, he would be open to supporting those... It was not really about what these protections would do for gay families, but what they would do for the titans of industry.”

Meaning if he wasn't running for public office, it would've been hunky dory to use minimum wage-earning illegal immigrant labor on his property just like Lou Dobbs.

Hopefully, these hackers are for real and we'll be reading through Romney's tax returns by September 28th unless a $1,000,000 ransom is paid.

6) "PETA is not happy that my dog likes fresh air." 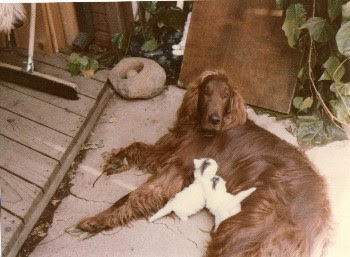 By now, I would hope we all know the story of the National Lampoon vacation 29 years ago in which Mitt Romney strapped his dog to the roof of the car in seeming ignorance of Massachusetts animal cruelty laws and drove 12 hours to Lake Huron. Seamus loved the fresh air of his windshielded kennel so much he shit all over the car and himself. In some of the few times the Romneys have spoken of the incident,

Romney stated that Seamus enjoyed being in the dog carrier, an "air-tight kennel", and that he was not aware of any violations of Massachusetts law. Ann Romney, Mitt Romney's wife, has stated that the news media exaggerated the severity of the incident, and compared traveling in the roof-top dog carrier to riding a motorcycle or riding in the bed of a pickup truck. During an April 2012 interview with ABC News, Diane Sawyer asked Mitt Romney about the Seamus story and if he would ever do it again. Romney replied, "Certainly not with the attention it's received", after which Sawyer stated, "You said it was the most wounding thing in the campaign so far", though it is ambiguous as to whether Romney agreed with this statement. During the same interview, Ann Romney stated that Seamus got diarrhea from eating turkey off the table before the trip, and that the dog loved the crate.

By saying he wouldn't do it again "with the attention it's received", Romney was basically saying, "Because I'm running for office, for Pete's sake." Plus, by insisting to this day that Seamus the Lovable Luggage enjoyed seeing the highway rushing at him for a half a day straight, Romney once again betrayed his usual sociopathic disconnection by seeing one thing (such as a meeting that reduced Julie Goodridge to tears being described by Romney as "pleasant") that's at stark odds with reality, meaning that not only is Mitt Romney a sociopath, he's a delusional one, at that, exactly the type of person right wing mouth-breathers want having access to our nuclear launch codes.

5) "I like being able to fire people who provide services to me." 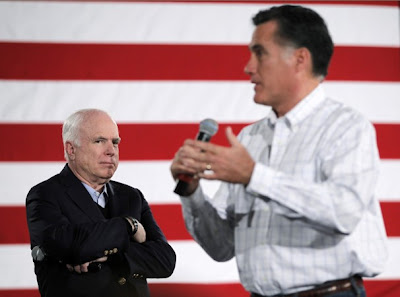 Most normal people, especially those who are running for office, for Pete's sake, would say something more along the lines of, "I enjoy having the flexibility to choose my health care providers and health care plans." But this is Mitt Romney, the world's most dangerous game show host, we're talking about. At a breakfast with the New Hampshire Chamber of Commerce last January 8th, Romney didn't just say what most normal people would say even if only out of political expediency because Mitt Romney is simply not normal. And he played right into the hands of Republican and Democratic opponents who didn't have to try very hard at making the image of the heartless corporate raider stick to him. Even a benign personal decision to eschew one health care provider for another is, to Romney, a cold-blooded corporate mandate that requires "firing" them.

4) "I'm not concerned about the very poor. We have a safety net there."
On the heels of this stupendously stupid gaffe, Romney then said days later, on national television, that he essentially didn't give a shit about the poor because the social safety net would take care of them. That would be the social safety net that Romney is trying to dismantle through a plan that makes running mate Paul Ryan's look like a liberal wet dream.

3) "An apology for America’s values is never the right course... The statement that came from the administration was, was a statement which is akin to apology and I think was a, a severe miscalculation."
History will say that Mitt Romney lost the 2012 race for White House on September 12th, not November 6, 2012. Because that was the day Romney sprinted to the microphone barely after September 11th became September 12th and got literally everything wrong about the Benghazi embassy attack that left four Americans dead. He misquoted the president and got the timeline wrong and packed so much bullshit into a single speech one is a little amazed that he didn't pull a Herman Cain and get the country wrong. 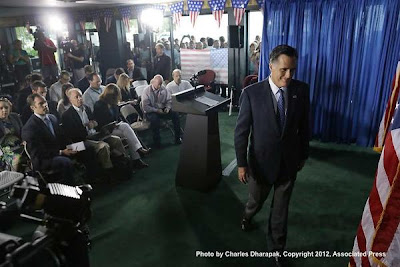 To punctuate my point, after delivering the news that four Americans were killed in a vicious rocket attack, Romney then turned away and smirked like a ten year-old who just put a flaming bag of dog shit on the vice principal's stoop on Halloween. Like I said: P-U-R-E S-O-C-I-O-P-A-T-H.

2) "I love this state. The trees are the right height."

In the ultimate irony, Mitt Romney said just today that he wants Gene Hackman to play him in a movie about his life. Maybe he had this scene in The Birdcage in mind, which sounds suspiciously like his approval of the height of trees in Michigan.

1) "When you give a speech you don't go through a laundry list, you talk about the things that you think are important."
A week ago today, Mitt Romney actually said that, once again, on national television, when asked why he didn't mention the troops in his acceptance speech at the RNC convention. Ergo, by using simple, algebraic deductive reasoning, Mitt Romney doesn't think the troops who are putting their lives on the line both here and abroad are important enough to even mention. I think ending right here would be only appropriate, no?
0 comments