Brilliant Recent Posts
Probably because his petzele is the size of a pretzel
Fear and Loathing on the Appian Way
Greetings from one of the people Willard Rmoney ju...
Diplomacy is Not an Option
Chickenhawks
Pic o' the Day
In case you missed this
Around the blogroll and elsewhere: Is it really l...
Top Ten Reasons Not to Vote For Mitt Romney
September 11th Redux 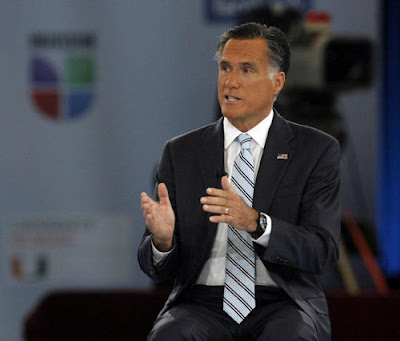 Right about now, I can perfectly imagine Brad Thor, the Ted Nugent of novelists, in his basement, a single yellowed light bulb swinging overhead like a ring announcer's mic, screaming at his 947 plastic and tin soldiers to look alive in case Obama gets re-elected. So I hope you'll forgive me if I also imagine a postscript: Of one of our nation's foremost Islamophobes being ignored by his inanimate infantry then hanging himself behind a huge painting of George C. Scott as Patton.

Because the Republican flop sweat hangs in the air like Amazonian dew. The buyer's remorse is palpable and the 1985 Cadillac El Dorado with the solid gold bumpers just ain't what it used to be or not what it seemed. It's behind the times, sticks out in the parking lot and too gaudy and conspicuous to ever be considered a classic. But what could the poor bastards do? Their other choices were Edsels, Ford Pintos and other jalopies. So, despite their Caddy breaking down literally every few hours, they keep pumping money into the thing because it's way too late to trade it in for a better vehicle.

Or, to switch running metaphors for a minute (Because, if you're a Romney fan and reading this, then you'd have to be intellectually agile enough to keep up with a guy who changes positions more often than a triple-jointed hooker with ADHD), the last week of the Romney campaign has been a slooooow motion replay of the last five minutes of the Hindenburg as it approached Lakehurst, New Jersey on its maiden journey. All this campaign needs now is for Jennifer Rubin to announce from her Twitter account, "O, the humanity!"

The trouble with that would be the fact that the Romney campaign has hardly distinguished itself for any semblance of humanity but rather its inhumanity. And over the last seven days, literally every few hours of each news cycle brought to light some neolithic fuckup heretofore unimaginable of a major presidential campaign. It's as if Camp Romney was being run by Bush insiders.

The week of September 12-19th started the day after extremist Muslim jihadists attacked the American embassy in Libya, killing our ambassador and three former Navy SEALs. The Romney campaign thought they were showing class by waiting a few minutes after midnight after 9/11 so it wouldn't appear as if they were, you know, exploiting the deaths of innocents for political leverage or anything. But when Romney went out to address the press as if he was already the president, he merely continued the foreign policy gaffes that burbled last August from his piehole in Europe and the Middle East like gas after a Hungarian dinner. Romney got the timeline wrong and accused the president of supporting the very people who'd killed four of our people. Then, to punctuate his true intent, Romney then smirked as he turned his back on the podium without even seeing the photojournalist who then took the now-infamous picture of his self-satisfied grin.

Then, in true Republican fashion, when called on his lies, he then doubled down on them like an umpire that had made a horrendous call but bound by protocol to continue selling it.

Then the Campaign That Couldn't Shoot Straight had to contend with a video of a Romney fundraiser that was shot at the home of corporate raider Marc Leder in which Romney, with impeccable projection, essentially called the 47% of the people expected to vote for Obama "victims" and moochers who "don't pay taxes."

The very next evening in California, Romney responded by claiming that his "inelegant" remarks were taken out of context (without actually denouncing his hateful remarks on Obama voters, sort of a, "Yeah, wifey, I got caught with my pants down with that hooker but we're still running away to Mexico to fuck and make babies, so eat shit and die. You'll hear from my lawyer.") and demanded that the full video be shown. Then, when Mother Jones promptly obliged and showed the entire video with no Breitbarting, it made Romney look even worse in full context. At one point, to show what an endlessly cynical, shallow and triangulating piece of shit he truly is, he then said at the same fundraiser,


"(H)ad [my father] been born of Mexican parents, I'd have a better shot of winning this. But he was unfortunately born to Americans living in Mexico. He lived there for a number of years. I mean, I say that jokingly, but it would be helpful to be Latino."


Then, in a classic, "I know what I am but what are you?" schoolyard moment, the Romney camp tried to fight fire with wet sticks by digging into the past to find a 1998 audio clip of Obama at Loyola University talking about his advocacy of income redistribution. The result was that networks favored the Romney video 13-1 and was essentially Romney's Whitewater moment.

And that brings us to the next fuckup of the week, in which days after the now-infamous Mo Jo video, Romney addressed Latino voters on Univision looking like an Ooompa Loompa accountant fresh from a month-long vacation in Cancun. Caked with some quasi-umber foundation that looked as if it had been purloined from Donald Trump's makeup kit, he then doubled down on that crack that being of Latino parents would be beneficial only in a political sense, that being Mexican or Latino would be a mere benefit to helping him realize his ravenously ambitious goals.

Then, in the middle of these glistening, squeaking, squirting, moaning clusterfucks, the Romney campaign then decides to give the Obama campaign another freebie by unzipping the real Ann Romney and put her back on the campaign trail. She appeared on Fox 31 in Denver to address her husband's astoundingly heartless and sociopathic remarks and to insult the intelligence of the American voter by saying that Mitt's campaign is all about helping the 100%, that he "doesn't disdain the poor." The Fox 31 interview was used as part of a campaign ad by the official Romney campaign Youtube channel that then abruptly pulled minutes later after it had gotten just 165 hits.

Then last night, it was revealed by a Romney donor, with some delight, that Ann Romney essentially doubled down on her husband's jeremiad against the 47% by once saying, “My horse has more style and more class in its hoof than they (Democrats) do in their whole deal.”

That would be presumably Rafalca the Olympic horse, who, if it could talk, would almost surely be more inclined to take Seamus the Lovable Luggage's side and to accuse Ann Romney of some projection of her own. Because it's difficult if not outright impossible to see the "style and class" in a psychopath who thinks everyone that would vote for his rival does not pay taxes, stalks, hunts down and assaults a gay classmate with a sharp object in a paroxysm of homophobia, puts tens of thousands of people out of work and ships them to China (and continues to have their jobs threatened by Romney's venture capital firm) and is perfectly comfortable with terrorizing the family pet for 12 hours to keep from getting a few dog hairs on his car's upholstery.

And that, for "you people" who don't have a scorecard, was just in the last seven days, quite possibly the worst week ever suffered by a presidential candidate. Perhaps in a year's time, Hollywood will sign Michael Bay to make a movie about the Romney campaign. Perhaps they can call it, Wagging the Dog on the Roof.

Either way you want to cut it, although the 47 days until Super Tuesday can still be an eternity in political terms, it's safe to say the Romney campaign is all but kaput. Aside from the corporate interests of the 1%, the only thing Romney has going for him now is that he's not Obama and, once he's off a Univision stage and is handed a Wet Nap, he's comfortably as white as virtually all of his voters. But they could've gotten that with Santorum, Gingrich, Bachmann, Ron Paul, Jon Huntsman and Rick Perry.

Chucklenuts said...
I have yet to see any of the people I know who are ardent right wing voters even sway one iota from Romney, I have seen the accusation that the media doctered the video, Obama has admitted he is a Marxists, but no one in the media has the balls to show that video.....etc....so it comes down to this, porgressives are the poeple who will criticize their party, look to be better and try to get the best candidate, where those on the right, don't care who or what the person does, if there is a R next to thier name, then by default, they are better than anybody with a D next to thier name. I am at a loss as I see people post, how could you be for this guy, he is a marxists, or seeing a graph of the number of people in poverty, not paying taxes and comments that say this is what socialism does for you. While ironically not seeing that the same graph is the best argument for why trickle down economics is a failure. Romney still has a good chance to win, simply because the right is louder, more on message than the left, not because we do not yell, but because the radio is one right wing talker after another, along with a press corp that is deftly afraid to be called liberal if it even attempts to report factually.

I did ont think it could get worse after 2004 and I saw the Republican convention goers wearing band-aids clored purple, then 2008 came an it was even more maddening, so now I am in utter disbelief, that a campaign that is so wrong in so many ways could even be polling this close.

Thia is not over, voting machines in the hands of R's, voter id BS, Romney is looking good and the right will be excited to have him voted in, and any squawking from the left about the above will be ignored
9/21/12, 8:16 PM
Post a Comment
<< Home
Contact
Home
Email:
brilliantatbreakfast at gmail dot com
RSS