What is This "War on Women" of Which You Speak, Stranger?
Posted by jurassicpork | 2:06 PM 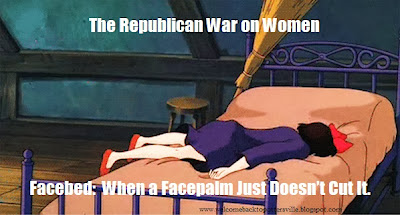 The National Socialist Party Republican Party of Michigan became the latest state to pass a rape insurance bill into law. And it doesn't even make exemptions for rape victims, one of the reasons why Gov. Rick Snyder vetoed a similar, earlier bill.
And Republicans still laughably try to claim there's no war on women, which was sort of the rationale we used to kill two million Vietnamese in the 60's and 70's. "War? What war? We didn't officially declare war on Vietnam."
The GOP has advanced women's rights about as much as Jack the Ripper. And even Jack had the sense to stop while he was ahead. Piss on these misogynistic, fascist motherfuckers.
3 comments

The New York Crank said...
Since the real Taliban doesn't function in the United States, we need to invent our own.

I can hardly wait for what's next - the public stoning of adulterers.

The New York Crank said...
Since the real Taliban doesn't function in the United States, we need to invent our own.

I can hardly wait for what's next - the public stoning of adulterers.