Brilliant Recent Posts
Greetings from the Land of the Walking Wounded
Rules for a 21st Century War
Before...
Blog Postcards From the Edge (A B@B exclusive)
Blogrollling In Our Time: Are You SURE You Want T...
May the Odds Be Ever in Our Favor
McHammered
Alan Grayson Was Right. Is This Really up for Debate?
Tales From the Soup Nazi Kitchen
McDicking Us Over 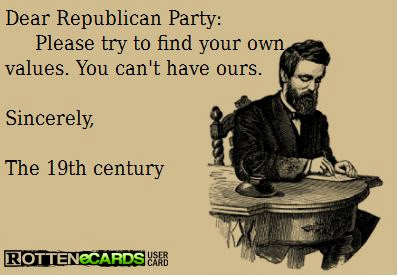 I have maybe six chapters and the epilogue to write for my massive epic, Tatterdemalion, so I'm going to be sprinting to the finish from here on out. That's not to say I don't take the time to go on Twitter every so often to bemuse my nearly 1100 followers. So here are some leftover thoughts from the last week. Let it not be said I don't recycle.
To the person who's, without exception, blown their nose in every restaurant I've ever eaten in since the 60's, why haven't you died, yet?
I'm curious: Since resigning as the Governor, has Sarah Palin ever gone back to Alaska without the intention of murdering something?
I'm not surprised Christians squabble with eachother over the meaning of Christianity. The Bible's view ranges from Altruistic to sadistic.
When exactly was it the GOP went from being the party of small gov't to the party of no gov't? My guess is January 20, 2009.
Being a liberal and setting up a politically-themed TL on Twitter requires a certain amount of unhealthy masochism or inverted sadism.
What'll I be grateful for on Thanksgiving? That every day for the rest of my life, I will wake up & know I will never be Brad Thor.
I think we can safely propose the fallout from Fukishima is so bad, Geiger counters ought to be mandatory at Fisherman's Wharf in SF.
On this date in 1742, Augustus Washington told his son George, "In America, anyone can become president." George: "What's a president?"
Paying HMOs is like playing a one-armed bandit. You put $ in & with luck you'll get a small payout. You're paying them for being healthy.
@RickStrandlof You just KNOW Nicki Minaj will be seen on the MiB HQ Jumbotron in Men in Black IV, right?
When it was that Michele Bachmann's, Louis Gohmert's & Ted Cruz's brains took out restraining orders on them?
Dominoes, n. pl.- A pointless waste of time and amateur engineering in which the purpose & appeal is not the creation but the destruction.
I feel sorry for Richard Cohen's right hand.
In 2011, it was Black Friday. Last year, it was Black Thurday. This year, it's Black Thursday morning. Next year, it'll be Black Big Bang.
What I can't fathom was why liberals were up in arms over the '05 expose of the Bush wiretaps but not over Obama's NSA scandal.
Yes, Twitter, please give me more recommendations to follow people who tweet exclusively in Chinese or Arabic.
After last night's Bar Rescue, I now fully understand why the South will never rise again.
And yet, despite the toothy backstroke on Phil Griffin's cock, Chuck Todd still has a job with NBC. Go figure.
I've concluded at least a quarter of the US wants to go back to the 19th century because they keep voting in Republicans.
We used to have places for people like Raphael Cruz: Bridgwater, Bedlam, Belleview...
The Republican Health Care Plan: Get on friendly terms with morticians.
Republicans carping about the slow ACA website are like arsonists who complain about the smoke their fires created.
God does a face palm on realizing He created silicon so we could take pictures of ourselves in the shitter. Fade to black.
To Sir, With Hate. #ChrisChristieBooks
0 comments