Brilliant Recent Posts
Blog Postcards From the Edge (A B@B exclusive)
Blogrollling In Our Time: Are You SURE You Want T...
May the Odds Be Ever in Our Favor
McHammered
Alan Grayson Was Right. Is This Really up for Debate?
Tales From the Soup Nazi Kitchen
McDicking Us Over
The First Rule of 2016...
The GOP's 10 Lesser Demands During the Government ...
Perhaps if President Obama saw more movies we woul... 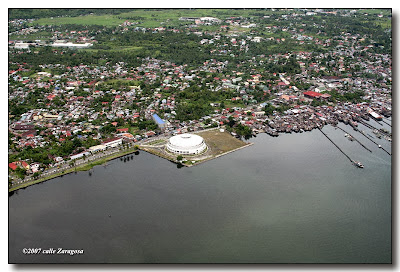 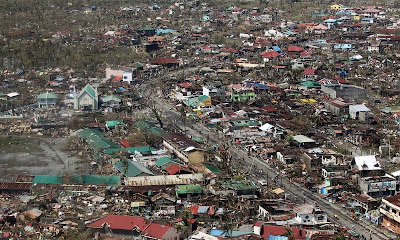 By now, I'm sure you all have heard about the horrific devastation that had struck the Philippines when Hurricane Haiyan, or Typhoon Yolanda as it was known to the natives, made landfall. Haiyan packed winds of 200 mph and gusts up to 235 mph, with Tacloban City, shown above, in the epicenter. On top of high winds and tsunami-like waves reaching 20 feet high, those in Tacloban City couldn't have possibly have prepared themselves for what's been called the most powerful storm on record. I've read heartbreaking accounts of 30 members of one family gone missing and people robbing the dead of food and actually stepping on corpses to that end. Looting is rampant and, typically, the Philippine government, instead of concentrating solely on relief, rescue and recovery efforts, is considering declaring Martial Law to stop looting. It's been estimated 10,000 have died in Tacloban City alone and the death toll is expected to rise by as much as another 5,000.
I'm not going to editorialize and blame global warming for this (although it's obvious burning fossil fuels is to blame) or to rehash Hurricane Katrina from eight years ago by citing parallels (although I've found all too many). In the wake of a tragedy such as this, human nature is the same all over and those poor people on the island of Cebu are forced to do things they never dreamed of doing as had the people of the 9th ward in New Orleans. And, sadly, government response is also the same the world over.
I've seen pictures of Filipino children walking along dirt roads, paying no heed to the bodies that are stacked up like cord wood because, after just three days in, the sight of rotting corpses is already so common. Old people lie dead and decaying on concrete steps while the living pass by them in the constant search for food and potable water. The Filipino authorities have said that, even though Tacloban City had a population of just 220,000, up to 4.3 million Filipinos out of the island nation of 96 million have been directly or indirectly affected. The British government has pledged 6 million pounds and our own government has deployed 90 Marines and sailors to the Philippines, a woefully pitiful number, in my opinion.
To help simplify things, Paypal has set up a special link on its site where you can donate to any number of charities involved in the relief effort to help the people of the Philippines (if it doesn't appear, keep refreshing the page). I'd sent the American Red Cross a small donation and I would please ask you to consider doing the same. Because, as Katrina and Irene and so many other super storms have proven of late, next year it could be our turn. What happened on Cebu over the weekend wasn't just a Filipino national tragedy, it's a global human tragedy. So please help them if you can.
1 comments

e.a.f. said...
what is so interesting is that when there is an emergency which effects something material, it gets attended to immediately by governments. If it is people, well they just wait and wait. Just how hard is it for a government to send in helicopters with water and food as a min. You'd almost think governments wait for people to die so there will be less to do.
11/11/13, 9:27 PM
Post a Comment
<< Home
Contact
Home
Email:
brilliantatbreakfast at gmail dot com
RSS