Brilliant Recent Posts
Blogrollling In Our Time: Are You SURE You Want T...
May the Odds Be Ever in Our Favor
McHammered
Alan Grayson Was Right. Is This Really up for Debate?
Tales From the Soup Nazi Kitchen
McDicking Us Over
The First Rule of 2016...
The GOP's 10 Lesser Demands During the Government ...
Perhaps if President Obama saw more movies we woul...
Dispatch from Casa La Brilliant: The Aftermath


Blog Postcards From the Edge (A B@B exclusive)
Posted by jurassicpork | 10:19 AM 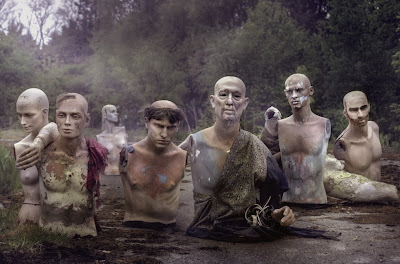 Chris Christie supporters show up at the polls.
Since I'm putting the finishing touches on the new edition of Assclowns of the Week, I haven't got much time for more than just thumbtack observations of last night's non-midterm elections. But for the most part, the results were encouraging and could plausibly be seen a bellwether of what to expect in next year's actual midterms: An honest-to-God refudiation of Sarah Palin's Tea Baggers and the radical right wing who loves them.
Bill de Blasio was elected the new mayor of New York City, beating the shit out of Guiliani-backed psychopath Joe Lhota. Mayor-elect de Blasio is a bona fide liberal Democrat who promises to begin undoing 20 consecutive years of Republican buttfuckery in the Mayor's office.
Bradley Byrne defeated Tea Bagger-backed Dean Young in the Republican primary for a Congressional seat in coastal Alabama. Byrne, widely seen as a mainstream Republican  was able to secure the support of the Chamber of Commerce.
In one of the biggest wins of the night, Terry McAuliffe bested Ken Coochie Coochie in the close gubernatorial race in Virginia in what was clearly another rejection of Tea Bagger ideology. Late in the election, Coochie Coochie was actually winning 51-41 until the city precincts began reporting in and then the minorities in those districts led Kenny know how they felt about his rabid racism.
The one bad piece of news that emerged from last night was the re-election of New Jersey Gov. Chris Christie but even here one must take this with a grain of salt: For reasons that remain mysterious to me, both Democratic voters and the Democratic machine in NJ swoon over this noxious, arrogant blimp like he's the greatest thing since Reagan. Barbara Buono, his main opponent, would've had a much better shot at winning if the Democratic establishment had actually fucking supported her. But that's OK: The sticker shock will finally set in when they realize Christie's just using the office as a stepping stone to the WH and he pulls a Sarah Palin in two years.
Unrelated to the elections, the state of Illinois became the newest state to have gay marriage when their legislature narrowly legalized marriage equality. This makes, what, the 16th or 17th state to now have gay marriage? I'm beginning to lose count.
As stated before, what happened last night could be plausibly interpreted as a sign o' things to come next year. The shutdown is still a bad but vivid memory in peoples' minds and no doubt many of them were thinking of that as they headed to the polls. They're beginning to realize tea bagger-backed psychos are not the answer to their problems, after all, but actually help create them. If the Democrats are smart, they'll leverage and capitalize on the bit of momentum they got last night and carry it over into next year's midterms then the '16 general elections.
I know, I get off a good one once in a while. Of course the Democrats will completely fuck this up. The Democrats could get a bases-loaded walk and still not score. But it's nice to dream.
0 comments