Brilliant Recent Posts
In Amerika, the "K" Stands For Kafka
#46Cowards
...and John Singleton Copley Wept
Double Bombing at the Boston Marathon
Good Times at Pottersville, 4/14/13
No, Janet Mefferd, we're not going to gas you
Den of Thieves
Hump Day Open Thread
"I didn't want a 28-year-old brat from Wall Street...
It's a Squeeze world, we just live in it.


The Week the Joker Struck and the Shit Hit the Fan in Gotham
Posted by jurassicpork | 11:55 AM

As the Chinese would cynically say, we "live in interesting times."
Adding to the interest is how, in times of great upheaval, life inevitably imitates art. The one bombing suspect we have left, Dzhokhar Tsarnaev, has a first name that sounds a lot like "Joker", the super villain who blew up a hospital in Gotham and battled the entire city's police department to a standstill. At the end of the standoff in Watertown, Massachusetts, there was even a boat involved that, thankfully, didn't blow up.
In real life, however, the Boston Marathon explosion was more like the opening scene in Die Hard 3, in which New Yorkers were going about their daily business one sunny summer day and suddenly Bonwit Teller blew up for no apparent reason (In fact, until 1989 there used to be a Bonwit Teller Department Store on Berkeley Street literally around the corner from Boylston Street, the scene of last Monday's bombing).
There's no Batman to save us from super villains or those with histrionic gifts. Instead, we have something both better and worse: The United States government and its team of special interrogators that have already arrived in Boston to interrogate the 19 year-old Tsarnaev without first reading him his Miranda Rights. As the Obama administration would be quick to point out, this is a necessary exception to the boy's Fifth amendment rights, known as the “public safety” exception. This rationale is a fig leaf covering our fear and paranoia without openly declaring it, another convenient excuse to subvert the constitutional rights of an American citizen such as Dzhokhar Tsarnaev while hiding behind "the public safety and trust." After all, there may be more unexploded bombs that could go off unless our sunglassed heroes can arrive just in the nick of time to save the day.
And, after 9/11, we found out just how disposable and expendable our Constitutional rights are at the first sign of a threat to our cherished way of life and how easily the government can make those rights disappear in response to a terrorist attack, which is always easier than getting at the root of terrorism and neutralizing the beast before it rears its ugly head. As former Republican congressman Bob Barr once warned us, "If you give the government power, it will use it." And, with extraordinary situations such as 9/11 and the Boston Marathon bombing, you can trust the government in only one way: That it'll abuse its power and contract individual rights while expanding its own until we become a nation of 300,000,000 usual suspects.
Obama's opening salvo in this new phase of the Boston bombing investigation is guaranteed to piss everyone off. The "temporary" curtailing of Dzhokhar Tsarnaev's Miranda and 5th amendment rights will alarm constitutional law scholars and liberals within and without the ACLU. Assuring Tsarnaev a trial in a civilian court will inspire lots of faux outrage among Republicans and other faux patriots who think Dzhokhar Tsarnaev should be a tried as an enemy combatant. Republican bigots Saxby Chambliss and Lindsey Graham have already said as much while the infamously anti-Muslim Pete King thinks we should keep all Muslims under surveillance.
And it goes without saying that the bottom feeders of the conservative movement, the same ones who hoped Obama would fail hours after the '08 election and openly jeered, cheered and sneered when the President personally tried and failed to get the 2016 Summer Olympics in Chicago will be quick to point out without irony that an act of terrorism finally hit American soil under Obama's watch. 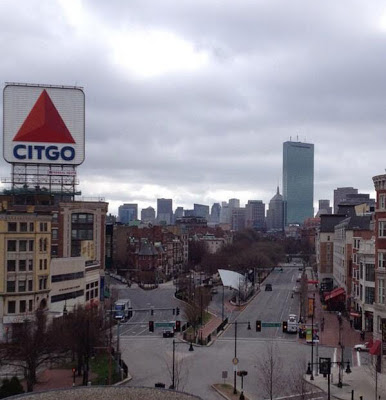 Everyone concerned, from the Boston police and those in the suburb towns who arbitrarily put us under martial law for a day to the Obama administration to the liberals to the conservatives to the suspects' family that can't seem to get on the same page regarding the brothers, are blowing this and, as usual, it's up to the perspicacious citizen to see what will likely come of this.


The Day the Shit Hit the Fan in Gotham 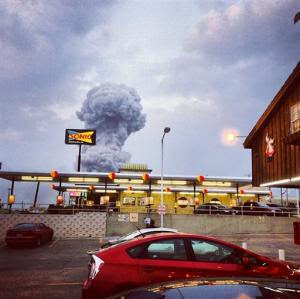 Meanwhile as seemingly every officer in Massachusetts law enforcement was converging on a backyard in Watertown and negotiating with Tsarnaev, 1832 miles away an Act of God informed Rick Perry that perhaps He wasn't too happy with his disastrous stewardship of the Lone Star State. A lightning bolt struck a fertilizer plant and set off an explosion that was likened by witnesses to a nuclear detonation.
Let's just leave the federal investigators to ask the questions of why the plant had not had an OSHA inspection since Reagan was president (1985), why they didn't have a lightning rod on top of the main building where the chemicals were stored, why no federal watchdog had been there in nearly six years and how they could've had 270 tons of ammonium nitrate (1350 times the amount that would raise red flags with the Dept. of Homeland Security), the same chemical used by Timothy McVeigh in Oklahoma City, without reporting it to the pertinent authorities.
Let's ask, instead, why and how this could've happened under the watch of the last two administrations. The first answer comes to mind: Both the Bush and Obama administrations have gutted the resources of OSHA to the point where they can no longer provide effective oversight and to better ensure the safety of the same public that they now piously claim to vouchsafe by denying an American citizen his Miranda rights. Both Bush and Obama own this, like it or not, libs and conservatives.
Let's also preemptively ask what we will learn from all this and the cynic's answer is, "Not a Goddamn thing." In this atmosphere of austerity for all but the 1% and corporations that viciously suck at the government's withered teat, it'd be the height of fallaciousness and naïveté to assume this corrupt and incompetent Congress that just last week saw fit to keep a needless debate open about background checks for criminals who want to purchase firearms and an administration that uselessly and self-destructively compromises with itself will do anything but slap a bandaid on an OSHA that's become a joke and is able to make nothing more substantive than suggestions.
Instead, what we'll be seeing is a government and city constabularies inspecting backpacks but not fertilizer plants. Corporations will continue killing innocent people and destroying and polluting the planet with hardly a slap on the wrist while the rest of us, as if we already aren't, will become a nation of 300,000,000 potential terrorists and criminals.
Indeed, only biometric software and an active database that's much vaster than any of us realize can account for the Boston Police being able to match the Tsarnaev brothers' faces on security footage with their names. Even the younger Tsarnaev's friends didn't put two and two together when they saw the footage of the suspects on TV and were even joking about the resemblance.
A year and a half ago, Occupy Wall Street served as a macrosized version of what to expect from all levels of government when the corrupt status quo is threatened by even so much as an iota. We learned that the big Wall Street firms most responsible for the crash of 2008 were funding and working in concert with the NYPD in a massive secret complex dedicated to accumulating biometric data so they could identify and better pursue the people seen at Zuccotti Park and elsewhere. These are the same law enforcement professionals, incidentally, who had beaten, tased and arrested law-abiding citizens for using their first amendment rights, the same ones we're now lauding to the sky after keeping us under martial law for a day without an Executive order.
Ergo, as with the ultimately failed Occupy movement that saw protesters get arrested and charged by the thousands while Wall Street oligarchs continued getting their pusses put on the cover of Forbes, we will see college kids getting harassed in the streets of Boston, Oakland, New York and whereever there is fear (which is everywhere these days) while companies and corporations will get to continue to skate over the legal line. Maybe the SEC will launch an investigation that'll end up in the usual settlement.
Meanwhile, the heroes and victims of Boston's bombing, as with those first responders in the wake of 9/11, have to scratch to get their medical bills paid for because Obama's and Romney's corrupt health care "reforms" prevented them from obtaining health coverage. Fracking and oil companies, fertilizer companies and Wall Street banks will continue doing business as usual while killing their employees, further victimizing their customers and persecuting their critics while we're further persecuted by our own perennially short-sighted government.
4 comments

Retired Patriot said...
Great post! You're saying what I'm thinking. And writing it way better than I could!

Brief: A female advisor in the admissions department at Georgetown University has been caught openly admitting that she committed the CRIME of discrimination based on people's race and gender in the application process.

This has the potential to create a large scale lawsuit against Georgetown University, and with the momentum building at the rate it is building, seems very likely that will be the outcome.

Below are the main links to all of the information regarding this news story and case.