Brilliant Recent Posts
Hump Day Open Thread
"I didn't want a 28-year-old brat from Wall Street...
It's a Squeeze world, we just live in it.
Sunday morning red-eye music
I think we're all bozos under this bus
The balcony is closed
The poster boy for "Clean-Slate Christianity"
Fox "News'" Greatest Fuckups of All Time
I can't wait
At Last. An Honest Cable/ISP Corporation. 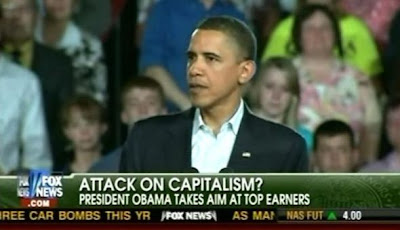 The day after submitting his 2014 budget proposal to Congress that included a vastly unpopular and completely unnecessary Chained CPI that essentially capped the COLA (Cost of Living Adjustments) for Social Security recipients, it was quietly revealed that this had occurred:


President Obama met at the White House Thursday morning with a group of top Wall Street chief executives as part of the administration’s efforts to forge better relations with the industry and enlist them in efforts to sell his fiscal proposals.

Now, I don't know about you but the optics alone ought to make every person who'd voted for Obama last November puke blood or go into a catatonic state of sticker shock. The very fact that this meeting between Barack Obama and a list of executives that reads like what the SEC's Top Ten Most Wanted list should sound like taking place in the Roosevelt Room of the White House should've made poor FDR spin and aerate the soil within 100 yards of his grave.
Let's take another, closer look at some of those names and institutions, virtually all of whom had received billions in bailout money, the second half of which being pushed through under Obama's so-called watch:

Among the topics discussed in the Roosevelt Room at the White House were immigration, cybersecurity, the long-term fiscal outlook for the country, and the stability of the financial system. The Forum executives also stressed measures to boost the housing recovery, skills training, and clean energy initiatives, according to a White House official.

Now, why Obama would want to talk behind locked doors about an almost entirely non-financial issue like immigration with such disingenuous company boggles the imagination but this seems to be conclusive proof that Obama, a man who is surely as much a part of Wall Street as the bull statue, is skeeving his own legitimate advisors and handing those duties off to the people that have done much more damage to this country than any Pakistani woman or child killed by drone strikes, Bradley Manning or anyone else who's not as well connected as Dimon, Blankfein and the others making up this ad hoc council.
But so as not to give you the impression that he's not listening to you, the President will consent to entertain the concerns of the little people via Reddit or some other forum during a tightly controlled 30 minute chat session where he'll pretend to listen to you.
To boil it down to the bare bones, Obama's essentially saying, "I hear you but I listen only to CEO's."
Because only the rich know what's going on and, unfortunately, that's more true than any of us know. After all, they knew what they were doing to this country long before the pasture hit the JPL wind tunnel back in the fall of 2008. We know Obama was funded largely through Wall Street even as the MSM was swooning over him and telling us his campaign was largely floated through a million little donations from a million little people as opposed to the relatively few but huge sums vacuumed up by Hillary Clinton.
And if looked as if Obama wasn't bought as completely by Wall Street during his re-election bid last year, well, you have Citizen's United to thank for that. That would be the same Citizen's United SCOTUS ruling that Obama publicly lambasted during a State of the Union Address, the same Citizen's United ruling that essentially said corporations can give unlimited amounts of money to candidates under the guise of "free speech" without having their identity made known. That would be the same Citizen's United ruling that Obama used to its maximum advantage as did Mitt Romney.
If you want to know what a real Democrat and a real American sounds like, watch this video of Elizabeth Warren grilling federal bank "regulators" who were forced to admit they were shielding the same banks that Obama was entertaining at the White House at that same exact moment by not revealing the exact number of times each bank had broken the law regarding their foreclosure practices.
Anyone masochistic enough to go back and view Warren's fiery speech promoting the Obama campaign to the high heavens yet perspicacious enough to listen to what our senior Senator's been saying since taking office will see a slowly but surely developing divide between her and the administration she was forced to pimp for during the Democratic convention. Warren's come out against the Chained CPI that Obama inexplicably but cruelly inserted into his 2014 budget proposal and she's forcefully endorsed a much more significant minimum wage increase than the Obama administration would ever dare propose to minority Republicans.
While it's important that we vote for the right people in next year's midterm, much more will be at stake in the 2016 general election. The same people who still for unfathomable reasons support Obama are even now gathering steam for a Hillary Clinton run for the White House. That would be the same Hillary Clinton who surrounded herself with almost as many lobbyists as John McCain in 2008 and led Obama by the hand to the Bilderberg Group meeting that year.
Warren would be a much better fit in the White House for progressives and others who actually care about the plight of the poor, the working poor and the middle class (who are increasingly getting squeezed by Wall St. and this administration into one writhing mass) than an elderly Clinton who will surely maintain the friendships on Wall Street that Obama has so carefully cultivated.
And if you want another reason why you should vote for Warren for president in 2016, consider this: On November 11, 2007, Obama said to Tim Russert on Meet the Press, "I believe that cutting benefits is not the right answer." While on her own campaign trail through Massachusetts last year, Elizabeth Warren consistently rejected any attempts to limit Social Security benefits for elderly and handicapped recipients. On her campaign website, she'd written, "Social Security is a promise made to our seniors and it would be a breach of trust - and just plain poor economic policy - to jeopardize this program with unnecessary cuts or risky privatization schemes." What's the difference between the two?
Warren's putting her money where her mouth is. Obama's putting our money where Wall Street's collective gaping mouth is.