Brilliant Recent Posts
Good Times at Pottersville, 4/14/13
No, Janet Mefferd, we're not going to gas you
Den of Thieves
Hump Day Open Thread
"I didn't want a 28-year-old brat from Wall Street...
It's a Squeeze world, we just live in it.
Sunday morning red-eye music
I think we're all bozos under this bus
The balcony is closed
The poster boy for "Clean-Slate Christianity"


Double Bombing at the Boston Marathon
Posted by jurassicpork | 4:40 PM 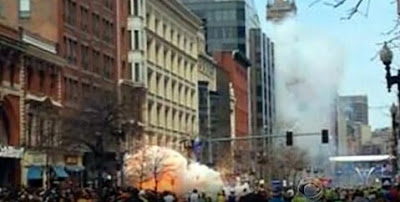 At approximately 2:50 this afternoon, two explosions occurred within 10-20 seconds of each other near the finish line of the Boston Marathon on Boylston Street. Fox News is now reporting that at least three people have been killed and ABC News on their live feed has revised the injury toll to 15-20.
There's also been a report of a third, controlled demolition by the Boston Bomb Squad, more likely than not the suspicious package they found in front of the Mandarin Hotel.
President Obama's been apprised of the bombings and Pennsylvania Avenue's under lockdown, especially in front of the White House and the Capitol Building and New York City is also stepping police security. Essentially, this means every major city on the east coast will be under lockdown. The FAA has also set up a no-fly zone over the epicenter of the bombing in Boston. Mayor Tom Menino has ordered all offduty police officers to show up and assist.
The 26th mile was supposed to be dedicated to the 26 victims of the Newtown massacre and many of the Sandy Hook families were standing in the VIP section of the grandstands near the explosions. Since the second one went off 20 seconds after the first (about three hours after the winners crossed the finish line), this means some first responders were hit with the followup explosion.
Thus far, no group has taken responsibility.
Trauma nurses are telling ABC News that the first aid tents have been turned into makeshift morgues and there are reports of several people having had their legs and feet blown off.
Update: Boston City Police are now confirming three more suspicious packages have been found, with one safely detonated. The latest casualty figures are 23 injured and two dead.
Update 2: For anyone who had family members at the Boston Marathon, here's the Red Cross's website that will assist in helping those interested parties to see if their loved ones are safe and sound. It may take a while to get through as I'm sure their bandwidth is maxed out. Otherwise, if you're on Twitter you can get updates on their Twitter feed @RedCross.
This is the most horrendous picture I've seen of the explosion's human toll. Do not click on this if you have a weak stomach. But it's important to see what these terrorists have done to our beautiful city and its residents on what was supposed to be a day of athletic competitiveness and a reaffirmation of our common humanity in honoring the Newtown families.
Update 3:  Consider the source but the New York Post is now saying the Boston police have a suspect in custody, a 20 year-old Saudi national. Like I said, consider the source and take it for what's it's worth. We also said 15 Saudis were involved in 9/11 and looked how true that turned out to be.
The Post has also upped the casualty numbers. They're now saying 12 are dead and 50 or more are injured.
Update 4: This is a video shot by someone who was within mere feet of the explosions. It's gone viral for good reason. You can tell 14 seconds had elapsed between explosions and you even see the epicenter.
Update 5: Boston City Police now say there was another explosion at the JFK Presidential Library. No deaths or injuries have been reported from that blast.
Update 6: