Brilliant Recent Posts
...and John Singleton Copley Wept
Double Bombing at the Boston Marathon
Good Times at Pottersville, 4/14/13
No, Janet Mefferd, we're not going to gas you
Den of Thieves
Hump Day Open Thread
"I didn't want a 28-year-old brat from Wall Street...
It's a Squeeze world, we just live in it.
Sunday morning red-eye music
I think we're all bozos under this bus 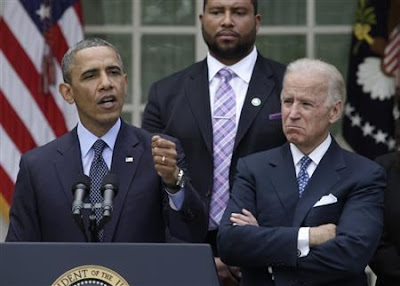 It hasn't been a good week for the United States. By Wednesday, twin bombs exploded near and at the finish line of the Boston Marathon, killing three innocents and wounding nearly 180. A lightning bolt struck a fertilizer plant in West, Texas last night, killing at least one police officer and five firefighters and destroying 80 or more homes. And then just hours before the West, Texas disaster, the United States Senate, the higher chamber of our legislative branch, voted 54-46 for the Manchin-Toomey bill that would've strengthened background checks for wouldbe gun owners.
This prompted the President of the United States minutes later to give a presser while Joe Biden stood behind him looking as if he wanted to eat Harry Reid's face without the aid of bath salts. The Chief Executive was also surrounded by Gabby Giffords and Sandy Hook parents. The mother standing behind Vice President Biden burst into tears at one point while Republican scumbags like Mitch McConnell were crowing about victory for thwarting cloture on a bill that's already decades too late in arriving, a bill that would only provide the first tentative steps toward some sensible gun control. Background checks are only a crude tool, a fish net that would only strain out the crazies and criminals who can still get fully automatic weapons online and at gun shows. Background checks are woefully inadequate but at least it's a start.
So the president who for the first four years of his term never once uttered the words "gun" and "control" in the same sentence and was plainly reluctant to enter the debate until Sandy Hook last December is being hailed as a hero by the left for finally doing the right thing and standing up, at long last, for victims of gun violence. It was billed as the President finally being angry but the real anger was in the faces of the Vice President and the Sandy Hook families. The real anger was in the email sent out minutes later by former Congresswoman Gabby Giffords, who almost lost her life in Tuscon to gun violence, when she wrote that "the US Senate did the worst thing imaginable... nothing."

The plain fact is, more Democrats broke ranks and sided with the NRA than Republicans doing so. Five Democrats voted against the bill while four Republicans, including John McCain of Arizona, did the same. Harry Reid changed his vote at the last second and voted against it for purely procedural reasons in order to bring the bill up again today for a vote. But he still voted against it and made it harder for this sensible, if middling, piece of legislation to achieve cloture and end debate. It could've been brought up for unanimous consent such as when Congress last week unanimously passed the bill that gutted the STOCK Act.
But it wasn't because 46 cowards, most of them Republicans (of course) decided to side with the NRA and gun-clutching Ted Nugent types despite 90-92% of the American people, many of them gun owners and NRA members, being in favor of sensible gun control measures that would barely get a handle on stopping tragedies such as Newtown, Aurora and the seemingly endless string of mass shootings that happened across America last year. Since Sandy Hook, over 3400 Americans have lost their lives to gun violence.
It was a classic case of Congress legislating at the people, against the people and despite the people and yesterday's vote on the Manchin-Toomey bill was arguably the most shameful moment of this 113th Congress. It was mainly the minority Republican Party you have to thank for this. That would be the same GOP that scuttled the Violence Against Women Act, denied relief for 9/11 first responders, held unemployment benefits hostage time and again while holding out for more tax breaks for the 1% and forced a sequester that's killing this country a little more each day. That would be the Republican Party that once again gave a giant, red, white and blue foam middle finger to the American people starting with the Sandy Hook families that just four months ago lost 20 small children to gun violence.
2 comments

The New York Crank said...
Your piece speaks eloquently to the malady that is destroying America. Too bad hardly anybody in Congress will give a damn.

Syrbal/Labrys said...
Sadly, I don't find it particularly courageous of Obama to "stand up" now.....in fact, in light of the very real erosion of rights more important than guns that he allows to continue as so-called "anti-terrorist" laws continue to create virtually a second zone of law enforcement free of Constitutional constraints AND useable against US citizens, I wonder if his alleged "stand" against guns is not merely cynical political currency?

And I frankly worry if NRA lies and American fears of loss of REAL rights is helping fuel the illusion of 'safety by gun' that is being hailed as the last rampart of American freedom.
4/18/13, 1:59 PM
Post a Comment
<< Home
Contact
Home
Email:
brilliantatbreakfast at gmail dot com
RSS