Brilliant Recent Posts
"I didn't want a 28-year-old brat from Wall Street...
It's a Squeeze world, we just live in it.
Sunday morning red-eye music
I think we're all bozos under this bus
The balcony is closed
The poster boy for "Clean-Slate Christianity"
Fox "News'" Greatest Fuckups of All Time
I can't wait
At Last. An Honest Cable/ISP Corporation.
Caturday: Bear Threatdown Edition 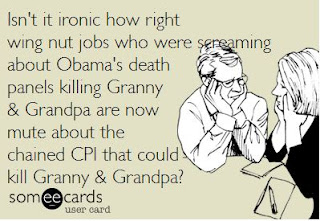 Trouble is, the American middle class are the ones getting humped and not just on Wednesday. It's inconceivable that more liberals than we're seeing aren't decrying this Chained CPI Grand Compromise by Obama as the unnecessary evil that it truly is. Remember, folks, this Chained CPI in the 2014 budget proposal is only to be found in the White House's version, not the GOP's. The Republicans are smart enough to let Obama shoot himself in the foot and the middle class in the head while keeping their hands clean. That way, when dozens of Democrats are up for reelection in next year's midterms and the Chained CPI proves to be as disastrous and unpopular among seniors and the middle class as it already is, they can then use that against the Democrats, especially those who will vote for this steaming pile of shit.
And American voters, with their historically goldfish memories, will forget that decreases in the COLA and cuts to Social Security, Medicaid and Medicare started out as Republican initiatives before Obama grabbed them and tried to make these rancid and destructive ideas his own and they will then vote Republican out of retaliation.
It's also typical that we're seeing more Obama voters angrier over something that will affect them and their own than Obama's other Big Ongoing Fuckup, which is the drone strike program. Because, you know, that's so far away and kills poor brown people we'll never meet, anyway.
Proving there's not such a fine line distinguishing the legitimately parochial from the merely solipsistic...
Thoughts, complaints, suggestions, lost and stolen items?
2 comments

The New York Crank said...
The Republicans are already trying to booby trap Obama with chained CPI. "Why don't we all sign off on the things all of us agree on?" said...was it Boehner or McConnell? I forget which. But the idea is, I'll sign off on the stuff you're giving up to compromise and stick you with it, without giving up anything myself.

Obama repeatedly and han-handedly has stabbed his on base in the butt. This is just the latest manifestation. He's better than Romney, for sure. But that's like saying, "Hey, infect me with bird flu. It's better than pancreatic cancer."

When are we going to get a real progressive in the White House?