Brilliant Recent Posts
Double Bombing at the Boston Marathon
Good Times at Pottersville, 4/14/13
No, Janet Mefferd, we're not going to gas you
Den of Thieves
Hump Day Open Thread
"I didn't want a 28-year-old brat from Wall Street...
It's a Squeeze world, we just live in it.
Sunday morning red-eye music
I think we're all bozos under this bus
The balcony is closed


...and John Singleton Copley Wept
Posted by jurassicpork | 11:21 AM 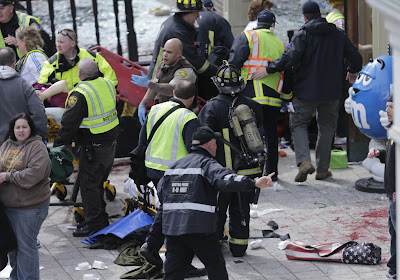 “We still do not know who did this or why, and people shouldn’t jump to conclusions before we have all the facts. But make no mistake, we will get to the bottom of this. We will find out who did this, we will find out why they did this. Any responsible individuals, any responsible groups, will feel the full weight of justice.” - President Barack Obama, April 15, 2013

What makes terrorism so effective is in its invariably hideous timing, its genius in fully exploiting the element of surprise. It's a Pamplona that suddenly materializes in a china shop, a freak hailstorm on a July day. And, as with September 11th, 2001, the Boston Marathon bombing couldn't have been timed worse, or better, depending on your ideological stripe. That Tuesday morning 11 1/2 years ago was also a sunny day, with people just arriving or going to work. It started out perfectly. The Boston Red Sox pulled off their second walkoff win in a week and many leaving Fenway rushed to Boylston Street to catch the last of the marathoners cross the finish line.
Yet what happened at Copley Square at 2:50 yesterday afternoon was especially insidious. The two bombs were strategically placed at or near the finish line roughly three hours after the mens' and womens' victors crossed the finish line (or when the bulk of runners would be thickest) at a race that for 117 years has been a Boston tradition. Copley Square was named after John Singleton Copley, a Boston artist. Originally named "Art Square", Copley Square is in one of the most historic and culture-drenched parts of Boston. It was intended to establish the Bay State's capital city's artistic bona fides and, for many years, it had done just that. According to Wikipedia, institutions adjacent or near Copley Square:

Those institutions are not mere aspirations but among the glories of New England and the United States.
Yet, within 14 seconds yesterday, two trash cans containing two crude but powerful bombs detonated, sweeping away any pretensions to culture, peace and civility, forcing professional first responders and good samaritans alike to play the role of heroes. At last count, at least 170 people were injured (17 in critical condition) and three killed, including eight year-old Martin Richard of Dorchester, who stood at the finish line waiting for his father to cross. And the pictures taken at the moment of the blast showed the surreal image of countless marathoners actually running toward the fireball.
Terrorism invariably brings out both the best and worst of people. Starting with the terrorists who carried out this twin bombing (and it was terrorism, regardless of what the president may choose not to say: The trash barrel bombs were impregnated with ball bearings to maximize the human damage, so essentially we're talking about two larger-scale Claymores), we saw the worst in Mankind when spectators body-tackled an injured Saudi national who merely tried to flee from the explosions. "Muslims" was trending on Twitter minutes after the bombings and right wingers such as Fox's Erik Rush was publicly calling for all Muslims to be killed before he cowardly took down his genocidal tweet. Mob wife and former murder suspect Pam Gellar wasn't showing much more restraint, herself.
But then we'd also heard of marathoners who, after running for 26.2 miles, continued running after the blasts in the direction of Mass General Hospital in order to donate blood. We saw ordinary bystanders, some of them injured themselves, who'd coordinated with first responders, every one of them potentially putting their lives on the line by simply remaining on the streets. There was the Boston City Police officer who threw his body on top of someone else's as one of the bombs detonated. These ordinary citizens, as well as the brave police officers, firefighters, EMTs and doctors ostensibly on hand to treat nothing more serious than exhaustion, muscle cramps and dehydration, are to be endlessly lauded for seeing to the nonpartisan dead and injured. And, of course, there was Carlos Arredondo, who along with his wife lost two sons, a 20 year-old to a sniper in Najaf, Iraq in 2004 and an older son to suicide.
As with September 11th, this is not a time to be pointing fingers and blaming one race, religion or political faction for what happened. Nearly 24 hours after the bombing, no suspects have been named and no group has taken responsibility, as is often the case. This is the time to come together as fellow Americans and fellow human beings.
I know that comes off sounding like a bromide but it's a bromide because it is simply true. This is a time for us to take comfort in eachother's humanity and to not widen partisan differences and reignite ancient and newer antagonisms.
Because the monster who's responsible for these bombings did so out of just such a mindset.
0 comments