Brilliant Recent Posts
Thanksgiving 2008
Today we give thanks for the ability to laugh at s...
Sweet Jesus I Love Martin Bashir
Sad Mitt Romney
Does this ad make New Jersey look stupid?
The stupidest fucking article ever written by some...
Corporate Hissy-Fits
Why Americans Won't Embrace Palestine
72 to 3
Not for the reason you think


We Create Our Own Reality
Posted by jurassicpork | 10:31 AM 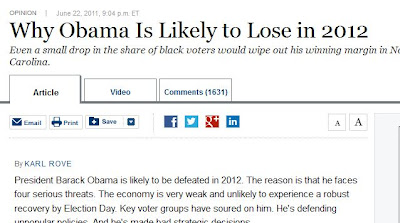 We won't finally get on the road back to reality until Karl Rove is made the manager of the bargain bin at a Houston K-Mart offering .99¢ discounted books by the likes of Sarah Palin, Brad Thor and Pam Gellar before they get sent to their publishers' shredders.
If on Super Tuesday 2012 the American public got fed up with the Republican Party's constant lies, scandals, racism, misogyny, ignorance, hostility and overall dysfunction and policies that are more unpopular than an outbreak of AIDS on Fire Island, then why haven't we similarly gotten fed up with the mainstream media and tanked subscriptions, Nielson and Arbitron ratings?
The return on the ongoing investments the MSM make on the likes of Karl Rove, who had gotten it consistently wrong about 2006, 2008 and most of all 2012 and Dick Morris, who's the anti-Nostradamus, would never fly outside the reality bubble in which the Professional Right (or Professional Wrong, depending on your fidelity to the truth) comfortably lives and into which they wind up dragging a good percentage of us.
In the real world, a consultant with a track record as abysmal as Rove's and Morris' would, over a period of a few years, eventually not get contracted to provide services, especially if they invariably made their benefactors and erstwhile employers look silly. In the real world, if you don't do your job correctly and show a stunning lack of ignorance in the commission of your duties, you get fired, plain and simple.
But this is not the real world. We live a Bizarro World in which popular incumbents and candidates, we're told even up until hours before the polls close, will lose to an unspecified whackjob who turns out be to less appealing and electable than a dead gerbil.
To be sure, not all of them are delusional. Republicans crunch poll numbers just like the Democrats and a canny, observant pundit (such as Nate Silver) can detect trends and see minute but telling shifts in campaign strategies such as Mitt Romney pulling millions of dollars of ads from Michigan, Pennsylvania and Wisconsin (all states he lost) and diverting the funds to other states in which he thought he had a chance.
But what does a candidate or incumbent do if the pollsters are wrong such as Gallup's and Rasmussen's now-infamous pratfalls just before Election Day? And these men and women who wear expensive business suits on television, these stupendously accomplished and erudite experts who've worked for presidential administrations, why they can't possibly be wrong! They must know something we don't!
At least that's the image and the myth that the MSM advances and everything depends upon this manufactured credibility and consensus. Just as war profiteers and other corporations create markets that didn't exist only to corner those markets when demand is artificially created, so the MSM, their tin-plated pundits and the corporate sponsors they all serve literally manufacture truth. As someone (almost indisputably Karl Rove) once told Ron Suskind in 2004, "we create our own reality. And while you're studying that reality—judiciously, as you will—we'll act again, creating other new realities, which you can study too, and that's how things will sort out."
That may be de rigueur and uncomfortably accepted by the proletariat in presidential policy-making in which the "actors" and "architects" are gone anywhere from one to eight years. But it's fatal, or one would think fatal, for a mainstream media that's around for longer than that, often decades. There was a reason why Walter Cronkite was "the most trusted man in America", a mantle that's never been reasonably assumed by anyone that's come along since his retirement from CBS's main news desk over three decades ago.
Read my lips: We need to stop PR welfare. We need to stop paying pill-popping child molester Rush Limbaugh tens of millions of dollars a year even while his employer, Clear Channel, lays off hundreds so they can keep covering his checks so he can lose over 130 sponsors and squirt diarrhea at women, liberals who plainly know more than him and minorities.
And we need to stop parading on television so-called experts and pundits who are plainly subverting the electoral process to exclusively benefit Republican psychopaths who wind up getting voted out after one term. Dick Morris, to name just one egregious example, was not only wrong about Mitt Romney, he was very wrong, predicting that Romney would get well over 300 electoral votes (even the most slanted and hopeful polls by the likes of Rasmussen "showed" Romney ahead of the president by one point going into Election Day) and win by the landslide that the president won by in the Electoral College.
But the MSM will never learn anything and we'll see the likes of Rove and Morris back on TV in another three or four years even as the GOP harvests another bumper crop of delusional right wing assclowns for our collective, condescending amusement, predicting that one of them will win the White House and that they'll take the Senate. Because manufacturing a neck-and-neck horse race when a landslide will surely occur, instead, and lying to the American public in order to sell commercial time at the highest possible rates is certainly more important than listening to Nate Silver.
9 comments

If every liberal who was unhappy with Obama had listened to you and voted third-party, Romney could have won and made people like Karl Rove look like experts regarding how to win elections.

Thank goodness very few people took your advice; most held their feelings of "moral superiority" in check and voted for the ONLY candidate who could prevent Romney from winning -- and they, thereby, left all those rightwing king-makers sucking their thumbs and looking incompetent.

If enough people had taken my advice, Jill Stein would've won and we'd finally be able to move forward in this country. Frankly, I think it's disingenuous of you to cede only a certain amount of votes for third party candidates in a hypothetical election, enough to act as a spoiler for Obama. I'd think the electoral college results were clear: Romney had about as much chance of winning this election as Rush Limbaugh winning a platinum medal in women's figure skating. In my own quiet way, I was every bit as right as Nate Silver. He just showed his work with solid numbers.

And I'm also as sick and tired of having to defend my vote for Jill Stein as I am seeing so-called liberals twist themselves in logical and moral pretzels justifying their own vote for Obama in exactly the same manner as right wingers had when they "reelected" George W. Bush. Everything I've written about Obama is absolutely, incontrovertibly the God's unflyblown truth and I challenge anyone to prove me wrong. I don't do just commentary. Over the last eight years, I've also sourced and double-sourced my facts and generally do a better job of it than most of the MSM and most bloggers.

And if we cannot use our own moral judgment before casting a vote we get to use only once every 48 months, then what better compass can you offer? Political expediency? Fear? Settling? Brainless partisanship?

Sorry, my compass is a moral one and I would've been deeply ashamed of myself if I'd done this year what I had in 2008. I'm very happy with my decision in voting for Jill Stein and not for some child-killing, drone-happy, DINO corporate fuckstick like Barack Obama. And when the nightmare deepens and the neofascism really emerges (protesting near a federal building or anywhere near the4 Secret Service is already against the law), think what I've been saying since 2008 and especially what I'm saying now.
11/24/12, 9:46 AM

As for all the bad things Obama did (and probably will do again), I do NOT need lessons from you as I have been writing about Obama's broken promises and broken pledges for more than four years and had (during the primaries) WARNED people not to vote for him, since his record in Illinois and in the U.S. senate did NOT support what he was promising to be. I was NEVER fooled about him and am not fooled about him now.

The larger point -- and the point you seem to be unable to grasp -- is that Romney would have done ALL of those same things AND a hundred more of his own evil devising.

docbradd said...
As long as there is this- we'll have Karl Rove.http://www.opposingviews.com/i/politics/2012-election/did-hacker-group-anonymous-stop-karl-rove-hijacking-election

CC said...
Anonymous keeps accusing those who voted third party instead of for Obama of riding the high horse or having airs of moral superiority, yet s/he admitted that Obama has had a poor record as a lawmaker since he was in Illinois and will continue to do bad things in his second term even as s/he pulled the lever for Obama.

Well, thanks for being honest, Anon. But it seems to me that you wasted your vote.

It also confirms what JP has been saying about Obama and the Dems.

True, Romney lost the election, but don't think that he and the rest of the 0.1 percent don't stand to benefit financially from Obama's second term. They already have from Obama's first term. And Clinton's two terms before that.

That shows what the Dems are about.

Anyone who voted third party WASTED his or her vote.

CC said...
Anyone who voted for Obama despite being fully aware of his misdeeds (to put it lightly) wasted his/her vote.

Your previous posts, Anon, would indicate that you know more about them than most.

Although I don't wish to see it happen, I'm afraid that you and many other Dem voters will be singing the same tune in 2016 when faced with a choice between "bad" and "even worse".
12/2/12, 4:17 AM
Post a Comment
<< Home
Contact
Home
Email:
brilliantatbreakfast at gmail dot com
RSS