Brilliant Recent Posts
The Ice Is Slowly Melting
And Now, a Word From Mike Flannigan
A thought for Mrs. Petraeus
Note to Republicans: You can't do it
Democracy Isn't For Wimps
Caturday
Talk about the body not even being cold yet
The measure of a man
The Man Who Would Be King
Citizens, United 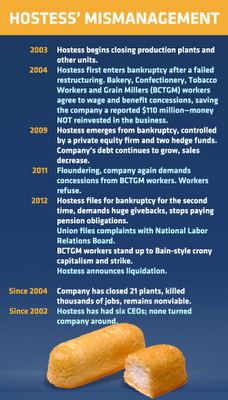 The closing of the bakeries that make some of America's most appalling snack foods has been painted by Galtians and The Usual Suspects of the lazy-ass media(as noted here) of yet another example of greedy unions being willing to put almost 20,000 people out of work rather than give up any compensation. It's a Republican wet dream -- an iconic American brand, etched into the memories of just about every American who was ever a child (even if that memory is of crying "all the other kids have Twinkies and Fritos except me!"), forced to close because its selfish, greedy union members won't do their part to keep the company afloat.

Except that's not the real story:

The corporate bias against labor is buried in the rhetorical DNA of the company’s announcement. Note the New York Times article announcing the closure:


Hostess Brands, the bankrupt maker of cream-filled pastries like Twinkies and Ho Hos, said on Friday that it planned to wind down its operations and sell off its portfolio of well-known brands. The decision comes a week after one of the company’s biggest unions went on strike to protest a labor contract.

The paragraph flows from announcing the liquidation to the union strike and the decision to close one week later. This draws a chain of causation between the strike and the closure that sits in the mind of the audience. The important term glazed over by the structure of the paragraph?

Yes, Hostess Brands was bankrupt before this strike happened. Indeed, it’s been bankrupt twice in the last 8 years, having only emerged from its last bankruptcy 3 years ago. Think about that a second. That means Hostess managed to go bankrupt, restructure, and run itself back into bankruptcy in 3 years. Perhaps this should get more play than “labor strike” when we discuss the demise of the company.

What prompted the company to run itself into the ground again? While the company has publicly placed all its business woes since 2009 on the difficult task of cutting labor costs, the reality is that the company remained behind the times. When America began to seek healthy alternatives to Wonder’s delicious but frightening 1950s deadly chemical feel, Hostess trudged onward losing market share to others. When childhood obesity became a national epidemic, Hostess kept churning out fat-filled cakes that sat uneaten on shelves. As the business faltered, Hostess turned blame on the workers.

But a losing business model with cheap labor can generate higher margins for only so long, and while this strike will provide the basis for closing the doors of the company, it will trigger the event that the company itself has planned for some time — liquidation. Hostess will now sell its famous brand names to other companies who can profit off them with smaller-scale production or by tweaking the product itself to better compete. For those at the top of Hostess, this — and not cutting labor costs while chasing diminishing markets — was the brass ring all along, with the owners of the company likely to become rich on these sales. By the way, who owns Hostess? If you guessed, “Private Equity firms seeking to slowly kill the company while milking its resources” you’d be right!

No, Bain Capital does not own Hostess. But the company is a casualty of the same kind of greed that Bain represents. It's not a greed of unions trying to hold onto pension benefits that their members were promised years ago and on which they based their retirement planning. It's the greed of vulture capitalists who make money whether the companies they "rescue" (and in this case it was Hostess, in 2009) succeed or not; and of well-connected executives who stuff their pockets even as they preside over a debacle:


Even as it played the numbers game, Hostess had to face chaos in the corner office at the worst possible time. Driscoll, the CEO, departed suddenly and without explanation in March. It may have been that the Teamsters no longer felt it could trust him. In early February, Hostess had asked the bankruptcy judge to approve a sweet new employment deal for Driscoll. Its terms guaranteed him a base annual salary of $1.5 million, plus cash incentives and "long-term incentive" compensation of up to $2 million. If Hostess liquidated or Driscoll were fired without cause, he'd still get severance pay of $1.95 million as long as he honored a noncompete agreement. When the Teamsters saw the court motion, Ken Hall, the union's secretary-treasurer and No. 2 man, was irate. So much, he thought, for what he described as Driscoll's "happy talk" about "shared sacrifice." Hall says he tracked Driscoll down by phone and told him, "If you don't withdraw this motion, these negotiations are done." Hostess withdrew the motion a few weeks later when Driscoll left -- the same Driscoll who, Hostess told the court in its motion, was "key" to "reestablishing" Hostess's "competitive position going forward." Abbott and Costello couldn't have made this stuff up if they'd gone to Wharton.

The board replaced Driscoll with Greg Rayburn, a restructuring expert Hostess had hired as a consultant only nine days earlier. Rayburn was a serial turnaround specialist who had worked with such high-profile distressed businesses as WorldCom, Muzak Holdings, and New York City Off-Track Betting. He became Hostess's sixth CEO in a decade. Within a month of taking over, Rayburn had to preside over a public-relations fiasco. Some unsecured creditors had informed the court that last summer -- as the company was crumbling -- four top Hostess executives received raises of up to 80%. (Driscoll had also received a pay raise back then.) The Teamsters saw this as more management shenanigans. "Looting" is how Hall described it in TV interviews.

Dick Gephardt, former House majority leader and current CEO , Gephardt Group Rayburn announced that the pay of the four top executives would go down to $1 for the year, but that their full salaries would be reinstated no later than Jan. 1. Hostess pays Rayburn $125,000 a month, according to court filings. At the same time Rayburn became CEO, Gephardt's son Matthew, 41, the COO of the Gephardt Group, was put on the Hostess board as a $100,000-a-year independent director.

It should be noted that Dick Gephardt is a Democrat, that he ran for president in 2004, and that throughout his House career, painted himself as a populist. Greed may be the brand of the Republican Party, but on an individual level it knows no party.

But let's have no further talk of greedy unions destroying Hostess. Union workers are the casualties of bad management decisions, not a deciding force in whether a company goes out of business. The bakery union that was striking in these last weeks had already made major concessions in 2009. It's hard to blame the members for not wanting to take even more while executives and former K Street lobbyists raked in the cash. UPDATE: Also, too.
2 comments

I know of Greg Rayburn. He was the corporate vulture that destroyed NYC OTB. The prior president earned $ 150,000 per year yet this POS received $ 125,000 per month. He assisted in the financial bleeding of the corp and others just like Hostess whereby a very strange coincidence his salary was $ 125,000 per month also. He is following along in the trailblazing path of Al "Chainsaw" Dunlap. Another vulture that destroyed businesses for fun and profit. Makes the Ferengi resemble Mother Teresa.
11/19/12, 12:51 PM
Post a Comment
<< Home
Contact
Home
Email:
brilliantatbreakfast at gmail dot com
RSS