Brilliant Recent Posts
72 to 3
Not for the reason you think
The Ice Is Slowly Melting
And Now, a Word From Mike Flannigan
A thought for Mrs. Petraeus
Note to Republicans: You can't do it
Democracy Isn't For Wimps
Caturday
Talk about the body not even being cold yet
The measure of a man


Why Americans Won't Embrace Palestine
Posted by jurassicpork | 11:48 AM 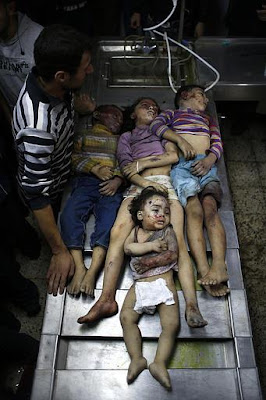 If one were to listen to long-discredited and worthless MSM organs such as the NY Times, the "conflict" between Israel and Palestine in Gaza is an evenly-matched battle of wills, if not armaments, with either claiming an equivalent moral superiority. What the Times and the entire American mainstream media fail to recognize is the full scope of the David vs Goliath fight. In this case, David is now Palestine and he stands no chance of winning this latest round of hostilities without some military, paramilitary and political backing from the rest of the Muslim world (such as Egypt).

But the MSM's blind spot regarding Israel's moral putrescence, one seemingly predicated entirely on a pre-apocalyptic mindset going back to the Holocaust if not before, is enabled by a mirror dysfunction on the part of the American people and that's recognizing Palestine's right to exist, one that's no less valid than Israel's or any other sovereign state.

Even liberals and other sympathizers in America (and this includes liberal, secular Jews, who have been given nearly exclusive rights to write about Israel and its various atrocities as if gentiles aren't qualified to do so) seem reluctant to fully embrace Palestine and to give it full-throated support. The primary reason, obviously, is the terrorist angle. In 2006, Palestinians elected to a majority level the militant group Hamas, which to a lesser degree than Israel (owing to it being outgunned) also has blood on its hands. In doing so, Palestinians, weary and impatient of the more conciliatory Fatah political faction, decided to vote in the less compromising and patient Hamas. The undiplomatic Bush administration, typically, refused to recognize the legitimacy of Hamas's majority in the Palestinian parliament.

But what's lost on the American MSM, and a majority of Americans is why Palestinians, who've seen their borders erode consistently since 1967 without even being given the option of moving out of their ancestral homeland (the Israeli embargo has been in place for five years now and showing no signs of letting up), thought their chances of recognized sovereignty and lasting peace would be better allying themselves with terrorists than Israel. That is, one would think, very telling.

Into this Schrödinger's cat scenario tiptoes other Arab and Muslim factions such as the cautious Muslim Brotherhood, of whom Mohamed Morsi , the new Egyptian president, is or was a part. There's hope in the Gaza region that the Arab Spring from a year and a half ago will give Hamas and Palestine the political if not diplomatic clout it's lacked for decades. That remains to be seen but one thing is clear: They can expect no help from the Obama administration, which was given another four years to ignore Palestine's plight by liberals and independents who, as with Palestinians and Hamas, were more afraid of a Romney administration than the incumbent one that gave us the NDAA and a reauthorizaton of the USA PATRIOT Act.


“There is no country on Earth that would tolerate missiles raining down on from outside its borders. We are fully supportive of Israel’s right to defend its borders.”

In doing so, our Nobel Peace Prize-winning president was merely toeing the line drawn by Israel and faithfully toed by every single President since Truman who'd either cheered on or looked the other way even when Israel committed war crimes against the United States. At the very least, our $3,000,000,000 in annual aid to Israel and selling them war planes and other WMDs makes us a target for every radical Muslim faction on the planet while every administration seems bewildered as to why.

But Obama, quite possibly without knowing it, is in precisely the same position with the Israelis as he is with the Republican Party: No matter what he does for the Israelis and no matter how many Palestinian deaths he ignores, the Israelis, coddled by unconditional support in the 64 years of their existence, will never have enough monetary, political or diplomatic support.

The numbers, however, are clear (the MSM, at least, does body counts): According to the Palestinian health ministry, in the last four days more Palestinian children (20) have been killed than Israelis of all ages in the last four years. One recent rocket attack alone flattened a house, killing 11 Palestinians. After making a laughable assertion that the strikes were "surgical" in nature, Israel recently has abandoned all pretense of humanity and has since widened their bombing raid to include offices where journalists work. Not only do they want to send Gaza back to the Stone Age, they're also trying to intimidate the Arab press out of documenting their war crimes.

Israel is the only acknowledged super power in the Middle East and the only owner of a nuclear arsenal that won't avail themselves of the confidence of having one. Israel comes off as looking like a scared and paranoid mugger with a .357 magnum in one hand and a Casull .454 in the other. No ordinance is ever enough and all they know is, they're not going back to prison. In the real world, however, such a paranoid and unstable criminal would never be tolerated in society so it makes little sense for the United States and its NATO fig leaf to engage in needless regime change adventurism in Iraq, Libya and other nations while allowing Israel to bring the planet closer to World War III.

It's time to stop giving Israel unconditional deference because of the Holocaust. Many nations and other religions had been persecuted against over the whole bloody skein of human history and Israel does not have the market cornered on genocide. The Obama administration is utterly worthless if you're a Palestinian or sympathizer (While running for president over four years ago, Obama even renewed our financial support, pledging Israel $30,000,000,000 in military aid over the next decade.). About the closest Obama has come to decrying the violence in the region was to say it would push the prospects for peace "way into the future." (Violence postpones peace? Thanks, President Obvious, even though it's just as obvious you were speaking of Hamas's rockets and not Israel's.)

At the risk of oversimplifying what is obviously a very complex set of political problems in the Gaza strip, the only path forward is to break off diplomatic relations with Israel, a nation that drunkenly and sneeringly holds the United States in absolute contempt and thinks, rightly, that it can dictate United States Middle East policy while boasting of derailing the Oslo Peace process (the same city where Barack Obama accepted his highly inappropriate Peace Prize.). We need to stop listening to AIPAC and especially to the Likud lunatics who make the majority. We also need to stop giving Israel three billion a year of taxpayer money and selling them warplanes to kill innocents.

Of course, that requires joint approval from both the legislative and executive branches and that's simply never going to happen even if every Republican was voted out of office.

But disavowing Israel's apocalyptic and militaristic agenda needs to go hand in hand with recognizing Palestine's right to exist. Israel's unctuous and risible assurances that they'll stand down if Hamas does first ring hollow while Palestinians bury innocent men, women and children by the scores in their shrinking homeland. It's not enough to recognize that Palestine's own right to exist is just as valid as Israel's. We also need to come to grips with the screamingly obvious fact that Israel is a terrorist state only with American political support, much more firepower, paychecks and pensions. And, like al Qaeda and other terrorist entities, they also hide behind their own civilian population.

Zionism, like democracy, is a failing experiment that has only succeeded in turning Israel and the United States, respectively, into that which we'd sought to distinguish ourselves.
5 comments

The New York Crank said...
Sorry guys. Generally I agree wholeheartedly with Brilliant At Breakfast,s but this piece is so insane that it's practically foaming at the mouth.

The Palestinians fire rockets into Israel. What's Israel supposed to do? What would you do?

They first went after the military "brains" of this Palestinian caper and took him out. The Palestinians fired more rockets. So surprise, Israel is firing back.

Body count comparisons are ridiculous. Dead children, or dead civilians of any age, or even dead soldiers are a tragedy on either side. But again I ask, what's Israel supposed to do? Let only "a few" of its children get killed? Try that in New Jersey some time.

Somehow, the whining by and on behalf of the Palestinians brings to mind the puny guy who walks into a barroom, stands up on the bar, and kicks the biggest guy there in the mouth.

Need I explain what happens next?

One might add that the Palestinians knew what would happen, and have made a coldly calculated decision to sacrifice the lives of its own civilians and own children in order either to create a propaganda victory or to attempt to draw the rest of the world into their self-made conflict.

The WP said...
Palestinians did not exist as an ethnic "group" until around 1834 when a small subjugated population revolted against Egypt's conscription laws. They were not the sole inhabitants of that land. In fact, they are a fiction, a creation of a propaganda machine. They have no communal history. The townspeople are Arab, not Palestinian, and most of them remained right where they always had been. What we now call Palestinians are the cast-off nomads of Jordan, Syria, Lebanon, and Egypt. They are not, for the most part, indigenous to the Gaza.

Jews have been living there for about 3000 years, give or take, but not under their own flag for almost two. That they were ruled by outsiders does not negate their status as living in the homeland.

Israel is finally, rightfully under its own flag. You're belief they are not legitimate citizens of their own land is patent nonsense. You know nothing a about the history of that crescent of land or you wouldn't sound like such a moron. When you announce the US is returning ALL of the land we now occupy to the native populations, then maybe you'll begin to have the tiniest inkling of what you're asking.
11/19/12, 11:16 PM