Brilliant Recent Posts
Citizens, United
Bill, Chris, and Sandy
Meanwhile, at Romney Campaign HQ in Boston...
Around the Blogroll and Elsewhere: Brief Republic...
Vote suppression got them a president eight twelve...
Musings on a Hurricane
Why I'm Not Voting to Re-Elect President Obama
I'm Not Blurry
Mm, mm, dumb.
The Retroactive Life of Willard Mittie


The Man Who Would Be King
Posted by jurassicpork | 11:16 AM 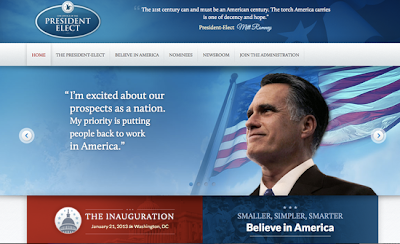 Taegan Goddard at Political Wire (Go the original site if you want to look at the full-size .png files. They're much too megabyte intensive to load here.) made a priceless catch the day after the election that shows what an utter delusional arrogant prick Mitt Romney truly is. Apparently, the Romney campaign created a presidential transition site that outlines how a Romney presidency would've started in the event the American electorate completely went batshit insane. The site was immediately taken down but not before Goddard took screenshots. This is perfectly in keeping with a guy who went to his "victory" party with just an acceptance speech and not a concession speech.

All that's missing is the word "inauguration" substituted for "coronation", which, perfectly in keeping with Romney's furtiveness and elitism, would've been in a private ceremony on January 20th. 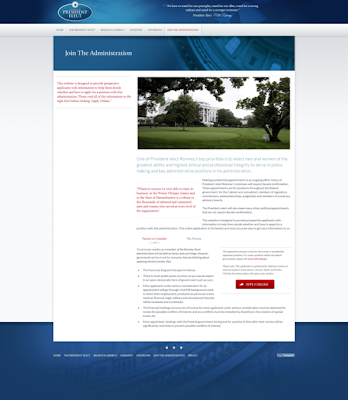 In this picture, Willard tells us that his fictional administration would've employed only people with the highest morals and ethics and that they'd be subject to an FBI background check... scrutiny to which Willard didn't feel he had to be subjected. 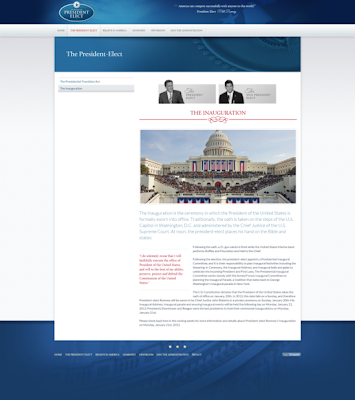 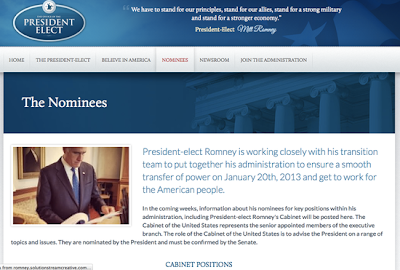 Here's a shot of Willard looking very presidential and reading something in front of a painting of a dead white guy, no doubt in reality a report from Bain Capital telling him they just made another cool $100,000,000 by outsourcing a few hundred US jobs to China after bankrupting the company with bloated management consulting fees.

This man makes me physically ill. I refuse to acknowledge his very physical existence and it is extremely unlikely that I will ever refer to him by name again.
6 comments

Mararama said...
Gosh, that has all the sparkle and sincerity of an ad for Chevy trucks. Which is just about right, actually.

Nan said...
It's now SOP for a nominee to set up a website for a transition, just like it's SOP for the General Services Administration to start working with a potential President-Elect as soon as that person's party has made it official at their convention. If Rmoney had won, on Wednesday morning his transition team would have found office space set up and ready to go in DC. In short, much as I despise Rmoney and love mocking him, the website isn't anything out of the ordinary or worth wasting snark on.
11/9/12, 11:45 AM

Bob said...
I know why he had to set it up. But it's snark-worthy because Mitt was in such a bubble, with his advisors lying to him (lying is natural around Mitt) that he didn't sketch out a concession speech. A lot of his supporters may prefer the alternate reality of his transition website. It'll be great. They can go to war against Iran on two trillion dollars loaned by the Chinese.
11/10/12, 3:40 AM

jurassicpork said...
What's notable here, and this is the reason for my snark, is that they were so deluded into thinking Romney had a prayer of winning that they actually activated the website on Election Night without even waiting for the polls to close and all the results to come in.

Anonymous said...
It's prudent to design a transition website. But to actually enable the site on a public server before knowing the election results, combined with not bothering to write a concession speech, shows a monumental level of arrogance and cluelessness.
11/11/12, 2:30 AM