Brilliant Recent Posts
Why I'm Not Voting to Re-Elect President Obama
I'm Not Blurry
Mm, mm, dumb.
The Retroactive Life of Willard Mittie
The Many Faces of Ann Romney
Pre-Storm Big Blue Smurf Blogging: What They Said
Around the blogroll and elsewhere: Waiting for Sa...
The News at a Furtive Glance: No Heart, All Chattl...
Condescending, arrogant prick.
"This is a beyond-strange situation" 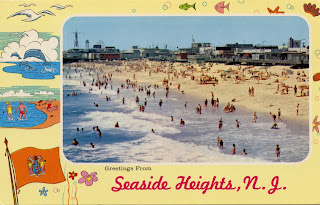 The power came back on last night. We were returning from an unhealthy but delicious meal of The Best Bar Burgers in Bergen County at our beloved Dog House Saloon. The area around the business district had been back on the grid for a couple of days, but we noticed that the area of houses with lights on extended further than it had just the day before. And then it extended further...and further...and when we saw lights on when we arrived at our street, it's difficult to describe the sheer joy that we felt after five days in the dark. If I ever won the lottery, I doubt I could be any more excited.

We live every day in blissful oblivion of what a gift it is that we can enter a room, flip a switch, and a light comes on; that we can push a button on a wall box and heat comes out of the vents; that we can touch a button and unlimited entertainment comes directly into our living room; that we can double-click on an icon and the world appears on our computer screens. For those of us lucky enough to have not had our homes destroyed as those who live along New Jersey's beaches have, who were lucky enough to NOT have an eighty-foot pine tree come crashing into our houses, coming within a shower of sheetrock of impaling our twelve-year-old (as happened to a former colleague of mine); whose loss consisted largely of the absence of cable TV and gnawing anxiety about obtaining gasoline for the generator; it's easy to wake up today and vow never to take electricity for granted again.

I have an unfinished novel that I often wonder if I will ever have time to finish. The novel takes place in the early part of the 20th century, and in the heyday of my time to work on it, I did a great deal of research into agrarian life at that time. We hear a great deal during political campaigns about "heartland values", and ads showing amber waves of grain and farm families sitting down to meals of the earth's bounty make an appearance. But what doesn't appear in these ads, particularly when they are for Republican candidates, is the idea of working together for a collective good. When housewifery involved banking a coal stove and pumping water from a near-frozen well and cooking everything from scratch and feeding men enough to sustain them through a day of hard work; when it involved canning vegetables for the winter and slicing the bacon from a slab in the smokehouse; when what women did in the home contributed as much towards the overall farm as the physical labor the men did, there may not have been happiness, but there wasn't the "Is that all there is?" ennui that afflicted women by the 1950's, when housecleaning and meal preparation was streamlined into near-effortlessness.

When times are tough, people have to come together just to keep life together. When you're in the dark and the cold, the things about your spouse that irritate you and have had you snapping at each other for weeks seem to disappear because someone has to lift the 5 gallon gas can for the generator and someone else has to hold the flashlight over the fill hole in the dark. When there's no TV and no internet, you have to actually TALK to each other. Marital strife is a luxury that we only have when just keeping day-to-day life together is not an issue. When you have to wait in line for four hours to buy gasoline, the guy who tries to cut in front of you because you are not blocking someone's driveway becomes someone you want to kill. But when the power comes back on and you don't need the generator, you're happy to give the gasoline you waited for just the other day to your neighbor on the next block who still doesn't have power and would have to still wait for hours for gas.

I'm not trying to ascribe any kind of character-building nobility to those who have lost everything. But for those of us who have emerged from Hurricane Sandy with relatively few hassles, it's time to reflect on how we have been living. It's a time to reflect on the "I Got Mine And Fuck You" doctrine that seems to have taken over our political discourse as we head into Election Day. And it's a time to try to hang on to the lessons of this relatively mild hardship for as long as we can.

On Leadership and Bipartisanship

I've never liked Chris Christie. People say that the cast of Jersey Shore represents everything that's terrible about New Jersey. I've often thought that Chris Christie does. He's like Tony Soprano without the Mafia -- gluttonous, crass, vulgar, a big hulking bully. It's hard to forget his jihad against New Jersey's teachers and his expression of desire that someone should take a baseball bat to septuagenarian state Senator Loretta Weinberg. Threatening a seventy-plus grandmother doesn't make you a tough guy. But these days, what DOES make you a tough guy is putting your job as a public servant above ideology -- and saying so on Fox News, of all places:

As if trying to ease the difficulties of those left homeless and wondering where the money is going to be found to rebuild the honky-tonk glory of the Jersey shore that he and many other New Jersey denizens love so much isn't enough, Christie is now under siege by the gasbags on his side of the political fence for his apostasy in putting the needs of people like this: 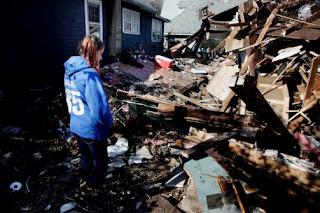 ...ahead of his party's agenda of wishing for any number of horrors to be visited on the American people if it means they get to gain more power.

I hope Christie succeeds. I don't care if he becomes the most beloved governor in the history of this state. I want him to succeed. Because if he succeeds, Jenkinson's Amusements rises again. If he succeeds, evenings spent by young couples on Jersey shore boardwalks will be enjoyed as much by future generations as it was by mine. If he succeeds, people will eat piping-hot fried scallops on a nearly-deserted Seaside Heights boardwalk on a rainy Labor Day the way we did in 2000. If he succeeds, the smell of cotton candy and the creaminess of Kohr's Frozen Custard and the sounds of amusement rides mixing with the crashing surf will once again be enjoyed by families. That would be worth it, no matter what the letter after the governor's name.

And the fact that I feel this way is what makes liberals different from -- and yes, just plain better people than -- today's conservatives.

If you want to help, and you just don't want to pour money into the Red Cross' coffers, here are things you can do and donate

: The Sea Bright firefighters are in need of the following items (source):

The items can be dropped off at the firehouse at the corner of Stillwells Corner Road and Schanck Road.

Donate directly to the town of Sea Bright here. Sea Bright is has been declared unsafe, with live wires and gas leaks.

Phil said...
I am so glad you guy's made it fairly unscathed.

Reading this post just reinforced my perception of you as a very, decent person.

Although I have been slacking personally for quite some time in the preparedness area, I would like to share a quote with you that I saw Thursday from an anonymous person from coastal New Jersey.

"No one is making fun of the Preppers anymore".

skywind said...
As usual, your writing leaves me in awe. If you ever finish your novel, I'll be in the front of the line to read it.
11/4/12, 9:35 AM
Post a Comment
<< Home
Contact
Home
Email:
brilliantatbreakfast at gmail dot com
RSS