Brilliant Recent Posts
Meanwhile, at Romney Campaign HQ in Boston...
Around the Blogroll and Elsewhere: Brief Republic...
Vote suppression got them a president eight twelve...
Musings on a Hurricane
Why I'm Not Voting to Re-Elect President Obama
I'm Not Blurry
Mm, mm, dumb.
The Retroactive Life of Willard Mittie
The Many Faces of Ann Romney
Pre-Storm Big Blue Smurf Blogging: What They Said 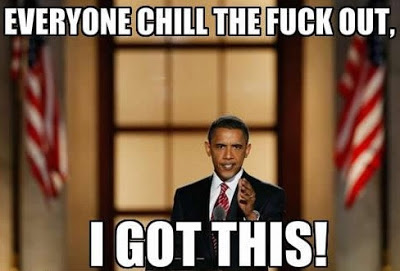 Those are the three most important names to keep in mind as we heave a collective sigh of relief this morning that we are not going to have four-to-eight years of Paul Ryan kicking old people out on the street, John Bolton as Secretary of State, more prom night dumpster babies, millions of women scratching their heads at the local Walgreen's wondering why they can't refill their Yaz prescription, and an austerity-induced second plunge into recession.

It isn't that the Republicans didn't TRY to steal it, what with possibly rigged unverifiable voting machines, last minute unverified "software patches", telling Spanish-speaking voters to vote on the wrong day, reporting of a legitimate poll observer as a member of the New Black Panthers, and long waits caused at least partially by Republican thugs "poll watchers" demanding ever-more-elaborate forms of identification.

There were other factors, of course. There was the 47% video and the Etch-a-Sketch that tried to turn Willard Rmoney from a "severe conservative" into the Defender of the Poor, which made people wonder just what they would be getting of Rmoney were elected. Then there was the increasing hysteria of the last days of the campaign, in which Rudy Giuliani, the man who set up New York City's command center in the World Trade Center, called for President Obama to resign and Paul Ryan insisted that America's "Judeo-Christian" values were threatened by Barack Obama's re-election in some mysterious way that they weren't in the last four.

But in the end, it was those three names that ultimately turned the tide in this country towards at least some semblance of sanity and toward the future.

Bill Clinton got the ball rolling at the convention, when he laid out the case for not just why it was taking so long for the economy to recover, but exactly what the obstacles were. Clinton's gift has always been in his ability to explain complex concepts in simple terms and do it with a twinkle in his eyes, and the gift he has of making you willing to follow him anywhere started to make even skeptics take another look at this young president who navigated economic waters more treacherous than anyone since FDR has had to deal with.

Then there was Hurricane Sandy.

It's one thing to talk about "smaller government" in the abstract. It's one thing to talk about "let the states handle it" when there isn't an emergency. And it's easy to talk about self-sufficiency when you're talking about poor black people taking shelter in a football stadium while their town is drowning. But when the images of devastation in the media are of white people picking through their belongings in a landscape that looks like an asteroid hit their community, it becomes far more difficult to marginalize those affected as being "the other", even if you live in Iowa or Ohio or Wisconsin. The sad fact of our society is that until misfortune happanes to white people, far too many white people can still remain detached from it and not extrapolate the possibility of disaster to themselves. No one is calling for the people of Staten Island and Lindenhurst and the Rockaways and Mantoloking and Ortley Beach to pick themselves up by their bootstraps.

The Republicans have made great hay of painting Barack Obama as a weak sister, a pussy, a girly-man. They've said he's not a leader because he doesn't beat his chest and proclaim to the world that he's the biggest, baddest dick on the block. But what Americans saw in the aftermath of Hurricane Sandy was the kind of leader one wants to see in a crisis -- organized, calm, efficient, comforting; one not calculating the political points to be gained but offering both words of comfort and actions to those affected. Anyone can bluster, but a leader actually gets things done. And here Americans saw a kind of leadership that does not need to advertise itself in giant neon letters.

And finally there was Chris....Chris Christie.

Who would have believed that Chris Christie, he of the bullying bluster, would end up as arguably the statesman of the year? When the biggest test that a governor can tackle came about, Christie put the good of his state above ideology and above party and not only toured the devastated areas with the same President he had excoriated days earlier, but consistently praised the President for his leadership and cooperation -- no doubt damaging his future, perhaps fatally, in the Republican Party as a result. For those still sitting on the fence, watching a respected rising star in the Republican Party praise this Democratic President, must have been food for thought.

And so today those of us who yesterday were terrified of a nation in which women are nothing but vessels for the continued power of white Christian men; of a nation in the discredited neocons of the Bush era are allowed to start even more unnecessary wars; of a nation in which them that's got shall get and them that's not shall lose; of a cruel winner-take-all society, can breathe just a little easier, in no small part because of Bill, Chris, and Sandy.

I, too, am feeling that there may actually be hope if this country managed to reject the paternalistic patter of the GOP. I remain hopeful that the new Congress will remember their ratings were below sewer level at the end of the last session.

Anonymous said...
Yes, happy clapping and cheering ensued here. I don't think it means it is easy now; but I hope the Rethugs can look at last night and honestly say, "Ok, we fucked up, now what" and change course from screwing the country to get at "that darkie in the Oval Office".

BNJ said...
Now what am I going to do with all these stockpiled tampons and birth control pills?
11/8/12, 7:02 AM
Post a Comment
<< Home
Contact
Home
Email:
brilliantatbreakfast at gmail dot com
RSS