Brilliant Recent Posts
The Retroactive Life of Willard Mittie
The Many Faces of Ann Romney
Pre-Storm Big Blue Smurf Blogging: What They Said
Around the blogroll and elsewhere: Waiting for Sa...
The News at a Furtive Glance: No Heart, All Chattl...
Condescending, arrogant prick.
"This is a beyond-strange situation"
The Man Who Fell to Earth, Redux
But will there be locusts?
Did Mendacious Mitt Help His Buddy Cheat on His Al... 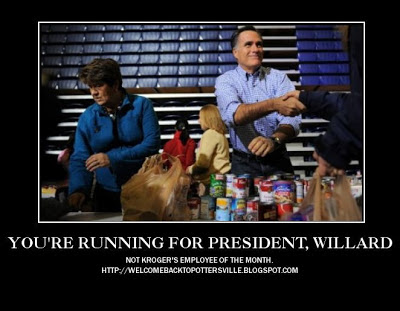 When history pinches the bridge of its nose ages and ages hence and selects the one single stunt the Romney campaign has pulled that reveals the sheer depth of Willard's superficiality, it'll point to his relief efforts in the wake of Hurricane Sandy.

Granted, it may not be on a par with Bush allowing 1800 mostly African American people to drown and float, half-eaten by crocodiles, in the streets of the French Quarter and essentially ensuring, by demoting FEMA from the Cabinet-level position it was under Clinton, that thousands would get warehoused in two giant buildings, away from the prying eyes of the press. So, on the sheer scale of ineptitude, Romney still has a long ways to go before he can fuck up like Bush. One can dream.

But if Romney had won the presidency four years ago, we'd still be seeing the same kind of triangulation, the same Irwin Allen opportunism we're seeing today. The difference, of course, is that we have as a Chief Executive a man who knows how to react to disasters, responds appropriately and in a swift, decisive, presidential manner. In fact, Mr. Obama's response to this crisis has been so exemplary that New Jersey Governor Chris Christie actually yanked a turkey drumstick from his jiggling maw to go on Dylan Ratigan's show on MSNBC to praise the president's efforts.

So, while the president, after canceling a Virginia rally to respond to Hurricane Sandy, has actually been of some help and not merely circling over the disaster in Air Force One like a momentarily amused tourist, Romney has been in the swing state of Ohio, the place where automaker jobs die and go to China, spending $5000 at a Wally World so as not to make the donation tables look empty.

Meanwhile, without having to spend a penny from his campaign, the president simply doing his job and ensuring that FEMA responds in a timely fashion is making Willard look like the world's most incompetent stock boy. Which is precisely what he is.

It's Willard essentially telling the Red Cross to go fuck itself and collecting canned food that the Red Cross will have to waste precious manpower on to process in some New Jersey warehouse. The Red Cross has repeatedly stated that it needs money, which is fungible and the one thing you'd think Romney would know something about, or blood donations through local area hospitals.

But Willard can't do that because Republicans such as him and Bush cannot grasp the concept of altruism, or the simple concept of helping out your fellow man in an hour of greatest need. The very idea of appropriately and effectively allocating resources where they're needed most is as alien to Republicans as setting fire to puppies and kittens is to animal lovers.

Lord knows I'm not a fan of the President but at least it's nice to see we have for the first time since 2001 a chief executive who knows where help is most needed and is smart enough not to impede on the rescue and relief efforts of professionals who know what they're doing. Romney collecting canned goods such as Campbell's soup also betrays his complete inability to grasp the reality that many people in the tristate area are without electricity and the canned goods would be worthless.

That's another concept Romney cannot grasp: Knowing the difference between political grandstanding and earning cheap brownie points instead of making a difference and uniting with the president as a fellow American. This is yet another lost opportunity for the GOP, which is bound and determined to do the exact opposite President Obama does in the final week of an election, even if people die as a result.

Romney could've listened to the Red Cross. He could've suspended his thinly-veiled campaigning in the swing state of Ohio. He could've asked Donald Trump to shut his obnoxious methane hole and to donate that $5,000,000 to the Red Cross' relief efforts. But he didn't do any of that. Because he couldn't. Help, to your typical Republican, is simply a four letter word that's always within smelling distance of the words "welfare" and "entitlements."

Because Republicans, when they come running toward disaster, respond to the cries but not to help.
2 comments

Romney could've listened to the Red Cross. He could've his thinly-veiled campaigning in the swing state of Ohio. He could've asked Donald Trump to shut his obnoxious methane hole and to donate that $5,000,000 to the Red Cross' relief efforts. But he didn't do any of that. Because he couldn't.

Your initial insistence of what he COULD do is factually correct, thus your last sentence that he COULDN'T is factually wrong. The truth is much worse, he just simply WOULDN'T!
11/1/12, 7:13 AM

The New York Crank said...
You're being too hard on poor Willard. I find it comforting to know that if I lose my home, my job, my family and my health, Willard will compassionately hand me a can of soup.