Brilliant Recent Posts
Mm, mm, dumb.
The Retroactive Life of Willard Mittie
The Many Faces of Ann Romney
Pre-Storm Big Blue Smurf Blogging: What They Said
Around the blogroll and elsewhere: Waiting for Sa...
The News at a Furtive Glance: No Heart, All Chattl...
Condescending, arrogant prick.
"This is a beyond-strange situation"
The Man Who Fell to Earth, Redux
But will there be locusts? 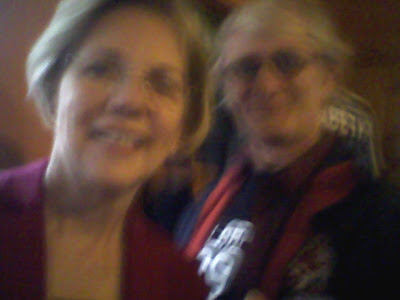 This is me with Elizabeth Warren at her rally in my hometown today (Someone else took the picture. I have to remind myself next time not to ask someone who has epilepsy or Parkinson's.). I'm not exaggerating when I say there must've been about 300 of us packed into the little Harvest Cafe in Washington Street. I also shot a 16+ minute-long video but my internet connection sucks so badly it probably won't load on Youtube until Warren's up for re-election.

Originally, I wanted to use that video as a lead for an article I'm planning that rebuts Charles Pierce's astoundingly numb-skulled post that he put up on Halloween. I won't get into the particulars of what I'll say but I will point out that the fear he claims is nonexistent among Obama voters is also responsible for putting Warren on the campaign trail.

Warren's speech was pure political boilerplate, laden with repetitions. But in her mouth, campaign trail boilerplate still sounds like poetry in Dylan Thomas's mouth. There's a difference between striking a populist pose with the requisite populist rhetoric and actually meaning what you say. Warren had to be practically dragged out by her personal security because she didn't want to leave until she shook every hand, gave every autograph and posed for every picture asked for. I had to literally bite my tongue to keep from asking her afterwards, "Where the fuck were you two years ago?"

Oh, yeah. Getting thrown under the bus by Obama when the GOP Senate had a problem with her heading up the financial consumer protection bureau that she'd started. But I'll get into all that in greater depth tomorrow. For now, let me close by saying that the lady is as warm and sincere as she comes across as on TV.