Brilliant Recent Posts
The Many Faces of Ann Romney
Pre-Storm Big Blue Smurf Blogging: What They Said
Around the blogroll and elsewhere: Waiting for Sa...
The News at a Furtive Glance: No Heart, All Chattl...
Condescending, arrogant prick.
"This is a beyond-strange situation"
The Man Who Fell to Earth, Redux
But will there be locusts?
Did Mendacious Mitt Help His Buddy Cheat on His Al...
Here they go again


The Retroactive Life of Willard Mittie
Posted by jurassicpork | 11:07 AM 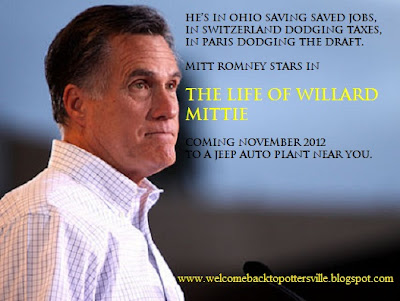 We could dismiss Willard Romney, the world's most accepted, if not loved, sociopath, as the Retroactive Republican. But that would be to sell Mitt Romney short. Mitt has worn different hats in his fabulously rich life:

Pro-war activist who dodged the Vietnam draft so he could live in luxury in a palace in Paris.

Erstwhile pro-life vulture capitalist whose company nonetheless invested in another company that disposed of aborted fetuses.

Telling Detroit it could go bankrupt before taking credit for the auto bailout.

Telling Ohio he'd save jobs from going to China that the auto industry already secured and expanded for American auto workers while Bain Capital sends 170 US auto maker jobs to China for real.

He's the new Danny Kaye, starring in "The Life of Willard Mittie."
0 comments