Brilliant Recent Posts
Bill, Chris, and Sandy
Meanwhile, at Romney Campaign HQ in Boston...
Around the Blogroll and Elsewhere: Brief Republic...
Vote suppression got them a president eight twelve...
Musings on a Hurricane
Why I'm Not Voting to Re-Elect President Obama
I'm Not Blurry
Mm, mm, dumb.
The Retroactive Life of Willard Mittie
The Many Faces of Ann Romney


Citizens, United
Posted by jurassicpork | 11:58 AM 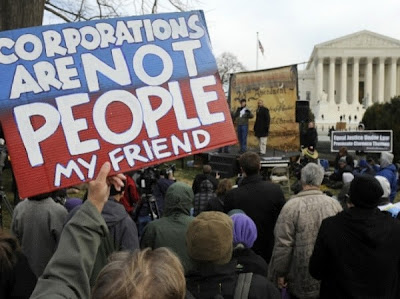 If Citizens United taught us one thing, it's that it doesn't always buy elections for Republicans. But we should also not lose sight of the fact that it and the Super PACs it makes possible with no transparency or oversight can also be used to buy elections for Democrats.

For now, however, progressives across the country, and many people in other countries, can take heart in the fact that the Supreme Court's horrible ruling on the role of corporate cash in elections is nothing compared to a peoples' resolve to push back against the obvious evil and painful incompetence that Mitt Romney and others handily represented.

In my home state of Massachusetts, Liz Warren beat Centerfold Scott to grab Ted Kennedy's old seat, making her rear end the fourth one to sit in old Ted's seat in less than four years. Warren, with virtually all MA precincts having reported in, won by 8 points, or 2-3 points more than I'd predicted. In the House races, Massachusetts, as usual, made a clean sweep and did its part for the sputtering progressive agenda in Congress.

Maine elected Angus King, an Independent who can be trusted to caucus with the Democrats. Maine also ratified same sex marriage, although it remains to be seen how long it'll take the homophobe element to overturn it this time.

In Illinois, the president's adopted home state, Obama's coattails proved to be very wide indeed, giving Democrats a strong majority in its House Delegation. The most notable win was war hero Tammy Duckworth, without legs, kicking Deadbeat Dad Joe Walsh out of his seat by a 10 point margin.

Psychopath Alan West had a shot fired across his bow by getting thrown out of Congress by Patrick Murphy in FL-18. Just as joyous was that Alan Grayson easily got back in the House in FL-9 by winning by almost 25%.

Unfortunately, not all the psychos got voted out. Eric Cantor got re-elected in VA-7, Michelle Bachmann, against all rhyme or reason, somehow clung to her seat in MN-6, meaning we'll have to endure the remains of the Tea Bagger Caucus she'd started for at least another two years. Paul Ryan, while he'd obviously lost his vice presidential bid, nonetheless easily kept his seat in WI-1 by beating Rob Zerban 55-43%. Leavening that depressing news is Tammy Baldwin fending off a strong challenge from Bush HHS Secretary Tommy Thompson to become the first openly gay Senator in United States history.

Not a clean sweep, but it's a start. Democrats, as I'd predicted, widened their lead in the Senate, garnering at last count 54 seats in the upper chamber. Not one Democratic incumbent up for reelection out of the 33 seats up for grabs got voted out. Democrats also eroded the Republicans' 241 seat majority in 2010. According to CBS's latest data, the Republicans, with 5 races still undecided, were only holding on to 226 seats. In the gubernatorial races, Democrats picked up three seats for a total of 20.

All in all, not a bad night. No wonder Donald Trump was calling for revolution and Karl Rove was arguing with Chris Wallace over Ohio.

But let's look ahead to the next general election cycle:

This growing trend is very significant and could be warning us of a sea change in the 2016 election. I've been asking myself since the election season began early last year who's going to replace Obama. Now is the time to start grooming a successor either within the administration or in Congress. Biden will be 73. Hillary will be close to 70. Obama's less than 60,000,000 votes shows that his support among progressives and liberals had seriously eroded even against a completely unelectable psychopath like Mitt Romney. The electoral college that actually decides presidential elections makes Mr. Obama's win look like a landslide (303-206) that makes a mockery of the usual neck-and-neck horse race projections by networks desperate to keep the viewers tuning in so they can sell air space.

But in terms of presidential politics, the Democrats under a weakened Obama are less enthusiastic about the party than Republicans are about theirs.

The chances of a Democrat getting in the White House in 2016 are looking dimmer by the week and Obama's performance over the next four years, unrestrained by worries about re-election, will largely determine that.

Meanwhile, like the Russians retreating from Napoleon's army, look for the outgoing Republicans to torch the place between now and early January.
10 comments

Jimbo said...
The right Democratic candidate for 2016 will, of course, be critical but I thought your post was a bit too downbeat at the end. The demographics facing the GOP are all very negative trends: old, white, rural/small town males many of whom are just racists. That's not what America looks like. The Tea Party will no doubt continue to bluster away but the real important election will be the 2014 mid-terms, especially for consolidating the new Democratic coalition. We can't have a repetition of the 2010 disaster.
11/7/12, 12:24 PM

Blotz said...
Unfortunately Ms. Warren is no spring chicken herself. The Democrat in 2016 could easily be someone who is below the radar right now, just as Clinton was.

I take some heart in the fact that there is no obvious Republican candidate either. I can't imagine Rubio or Christie making it through the Republican primary meatgrinder. Ryan mayhaps, but he has his own election to get thru in 2014.
11/7/12, 7:38 PM

jurassicpork said...
And yet, Jimbo, they always come back, the GOP and their tired old racist values, like so many herpes sores. I stick by my assertions: If we don't start grooming a successor now, the GOP will take the WH in four years. We're already seeing a trend moving to the right in that regard.
11/7/12, 10:56 PM

Mararama said...
I agree with you completely - I don't know who this candidate may be, but the democratic powers that be should start working the process immediately.

I've maintained all along that what saved us from Rmoney is that for once the Republicans lost their focus. If they'd bit the bullet much earlier and accepted the obvious fact that Mitt was their nominee, lined up behind him, polished him up and wheeled him around the country, smiling and selling his hotcakes, we probably would be calling him president elect today.

Fortunately, for once they couldn't come to agreement behind closed doors, and took their fight on stage. Democrats can't afford to do the same in 2016! I only hope that over the next four years Obama can generate some good will to build on, despite Republican opposition.
11/8/12, 12:39 AM

Diva said...
Hey, JP. Herman Cain wants to form a third party. Might be something that all you "moralistic" people who couldn't possibly vote for Obama should try.
11/8/12, 8:52 AM

CC said...
Diva, when did Cain ever have morals?

Anyway, his party, if it becomes a force, would likely take votes away from the Republican candidate. Sounds like something you should try if you want to keep electing Democrats.
11/10/12, 6:22 AM

And, as a personal aside, I'm sorry to hear you sneer of my morals, which I feel with deep conviction, and knowing that you, also, voted for Obama. I thought you had more brains and character than that.
11/10/12, 11:58 AM
Post a Comment
<< Home
Contact
Home
Email:
brilliantatbreakfast at gmail dot com
RSS