Brilliant Recent Posts
New York City just elected its most progressive ma...
What is This "War on Women" of Which You Speak, St...
The War on Christmas
Saturday Music Blogging
Phoning it in Again
IOKIYAR
What Nelson Mandela Couldn't Teach Us
Top 10 Tips for GOP Congressmen Running Against Women
Dawn of the Desperate
Thanksgiving Misgivings 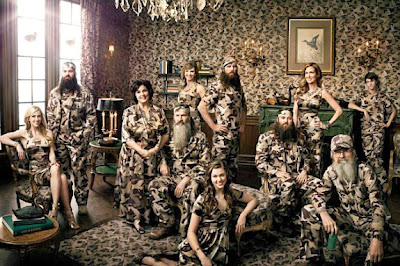 (By American Zen's Mike Flannigan, on loan from Ari.)
"Start with homosexual behavior and just morph from there. Bestiality, sleeping around with this woman and that woman and that woman and those men." - Phil Robertson, GQ
"Free speech is an endangered species: Those 'intolerants' hatin' & taking on Duck Dynasty patriarch for voicing personal opinion take on us all." -Sarah Palin from her Mooselini Twitter balcony

There are many things that do not subscribe to common sense in the Phil Robertson storm raging across the internet. The first that comes to mind is why A&E, a cable channel that's quickly acquiring a reputation for putting out some of the best shows on television, would want to shovel boatloads of money at the boots of a man who'd already made millions with his patented kazoo, a man who makes Jed Clampett look like Cary Grant by conspicuous relief. Another is what A&E's executives were thinking in putting a bunch of hillbillies on their network when it was obvious that they'd eventually say something stupid and embarrass the network. The only wonder is that it took four years for this to happen.
Another question is why ignorant right wingers and fellow hillbillies like Sarah Palin are screaming about the First Amendment as if that's some guarantee of getting a reality show and how a Constitutional amendment somehow applies to a network (i.e. part of the Free Market) when all it does is safeguard individual rights from the overreach of government.
Another is why freedom of speech is so important in Phil Robertson's case and not Phil Donahue's or Dan Rather's or the Dixie Chicks or Linda Ronstadt or Martin Bashir or... Well, you get the idea.
In the cases of the abovementioned, all these people did was speak truth to power. Back in 2003, Phil Donahue had his highly-rated MSNBC (You know, the "liberal network") show pulled off the air ten years ago for criticizing the Iraq war and the Bush administration's constantly-shifting rationales for it. Dan Rather was essentially forced to resign from his chair hosting the CBS Evening News for a 60 Minutes II segment the following year for simply telling the truth about George W. Bush's Texas Air National Guard service because they didn't vet 100% of the documentation. In fact, the fallout over that flap was so all-pervasive, four producers lost their jobs and 60 Minutes II was immediately cancelled despite respectable ratings. In fact, it salted much of CBS's earth because of the furious pushback from a few partisan right wing bloggers.
Linda Ronstadt's career took a nosedive when she inveighed against Bush during a show in Las Vegas when she lauded Michael Moore's new movie Fahrenheit 911, a movie that had set box office records for its genre. She was not only booed off the stage, she was booted from the casino. Ronstadt's only mistake was in overestimating the liberal sensibilities of your typical nightclub audience, an entertainment demographic that's notoriously conservative and completely out-of-touch. In fact, news reports at the time said,


Ronstadt's comments drew loud boos and some of the 4,500 people in attendance stormed out of the theater. People also tore down concert posters and tossed cocktails into the air. Timmins, who is British and was watching the show, decided Ronstadt, who was booked to play only one show at the venue, had to go -- for good. Timmins said he didn't allow Ronstadt back in her luxury suite and she was escorted off the property.

All for telling people to go see a movie.
The Dixie Chicks can tell you all about the right wing's sanctity of free speech. Nearly 11 years ago, Natalie Maines also took a moment from their set list in London, England to say, “Just so you know, we’re on the good side with y’all. We do not want this war, this violence, and we’re ashamed that the president of the United States is from Texas.” Does that not qualify as an opinion as much as Phil Robertson's ignorant dismissal of gayness and likening it to bestiality?
The Dixie Chicks had to wait a decade for their careers to recover and all over criticizing a war and a "president" that hardly anyone who doesn't paint murals with their feces still defends. CD's were burned and there many war-crazed Americans who would've loved to have burned the women who made them and not in effigy.
To cite a more recent example, there was the coerced "resignation" of Martin Bashir, who suggested someone should shit in Sarah Palin's mouth on account of the woman's obvious idiocy. As with Phil Donahue a decade ago, the "liberal" MSNBC flew into a corporate rage over his comments and, after a meeting with the same Phil Griffin who'd suspended Keith Olbermann three years ago for making two minor contributions to Democratic campaigns without disclosure, Bashir effectively "resigned."

It goes without saying that Bashir, the Dixie Chicks, Dan Rather and Phil Donahue have already been vindicated by history and posterity. Sarah Palin is indisputably an idiot and a failure in every professional aspect. The war in Iraq was unjust and we'd spent or will spend nearly $4 trillion on a war that bought us nearly 4500 coffins and the execution of a single tin pot dictator. George Bush did go AWOL from his Texas Air National Guard champagne flight and wound up, for reasons that haven't been fully explained to us, in Alabama, of all places. Phil Donahue was also justly critical of the war in Iraq. These people told the truth or expressed opinions that are no less valid, to say the very least, than those made by an ignorant redneck likening homosexuality to bestiality.
Now let's look beyond the irony of a hillbilly like Phil Robertson appearing in a magazine named Gentleman's Quarterly or of him inveighing against gay sex after making a fortune inventing and patenting something for other men to put in their mouths and look to the larger issue, one that's even larger than the rabid right wing's breathtaking hypocrisy in apportioning First Amendment rights only for those who echo their ignorant prejudices and biases.
It wasn't too long ago that Lara Logan flushed down the toilet whatever credibility she may've built up over the last decade as a war correspondent by taking part in what cannot even be called bad reporting but an outright hoax in 60 Minutes' take on the Benghazi attack. Essentially, Logan and the show's producers had willingly Curveballed themselves out of relevance and respectability by taking the word of a con artist who claimed to be there at the Benghazi embassy and even conned his way into a book deal that was later rescinded when the guy's story fell apart. Yet, 60 Minutes is still on the air, Lara Logan still has her job and the Benghazi hoax has been virtually forgotten despite it being one of the most shamelessly incompetent pieces of journalism in the world this year.
Time after time, we liberals are comforted by one survey and poll after another telling us that America is leaning more and more from the right wing regressive side of the political spectrum and to the progressive side. Yet our standards and tolerance for outright bullshit tells a different tale as right wing talking points and outright fabrications are troweled out on a daily basis virtually unchallenged (such as ObamaCare's failure when it still hasn't been officially implemented and Benghazi, Benghazi, Benghazi).
Those of us in the know knew way back when when the purges began 10 or 11 years ago that Rather, Donahue, the Dixie Chicks and Ronstadt were right. But the rest of us were whipped into a pro-war hysteria that simply wouldn't tolerate a dissenting opinion that's guaranteed to us in the same First Amendment that's now being touted as an example of why we ought to allow Robertson to spew what are obviously falsehoods. Again, A&E shouldn't be shocked about Robertson's pronouncements. After all, he's the patriarch of a family that looks like an inbred Appalachian cult and his Bible-banging pretensions are pretty typical for the Bible Belt.
So we've become a nation where gun nuts congregate at Starbuck's with our AR15's strapped to our backs, choke down Chik-Fil-A sandwiches and Freedom Fries, do our Christmas shopping at Hobby Lobby and cook Barilla pasta because the people who own and run these corporations echoed our pet prejudices and artificially gave us consensus. It doesn't matter to them that yesterday Utah got same sex marriage and the day before New Mexico did, making 18 states with marriage equality. It doesn't matter to these people that others who inveigh against the LGBT community aren't merely un-PC but hateful and prejudiced. It doesn't matter to them that just because Phil Robertson didn't see examples of racial prejudice in the 60's that it didn't exist. And it doesn't matter to these mouth-foamers that it's not free speech that's un-PC and no longer tolerated but outright lies and bigotry.
Again, if Martin Bashir or David Letterman say something critical about one neolithically stupid woman, it's off with their heads. But if Rush Limbaugh consistently makes misogynistic and demeaning comments about all women, calling one "a slut", that's his right as a Republican white male.
As long as our worst fears and bigotries are amplified in an echo chamber, there will always be a large segment of us who will insist on freedom of speech while screaming their fool heads off to figuratively or literally axe those who challenge those prejudices or speak inconvenient truths. We need to be lied to because the reality of our nation, that many of us still hate African Americans and gay people and that the pre-Civil Rights America wasn't just hunky dory, is still too horrible to confront.
3 comments

I know it all seems so obvious, but I can't escape the nigh constant fantasy of tying a Sarah Palin fan to a chair and making them hear that post over and over and over.
12/23/13, 2:01 PM