Leave the Therapy to Us
Posted by jurassicpork | 12:10 PM 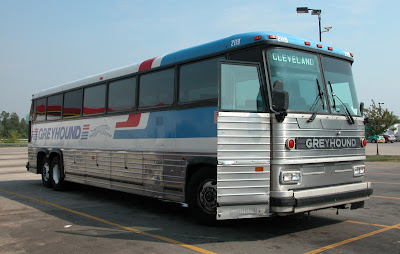 (Tip o' the tinfoil hat to Mrs JP.)
It could've been worse: Nevada could've put its mental patients under the bus instead of on it. But that's about the only good thing that can be said about the biggest health care scandal to hit Nevada in decades, if not ever.
Luckily for these 1500 mentally ill patients that have been shipped out of Nevada and foisted off on other states since 2008 (which comes out to almost one a day), the Sacramento Bee and their staff writer Cynthia Hubert has been all over this story for the last two months. It's reached up to Gov. Brian Sandoval's office who could no longer stonewall the press as it notoriously has done since the Republican Sandoval (hereafter referred to as Mexican Mitt) and his flaks have done from Day One.
Let's all pretend not to notice the feral opportunism showed by Nevada Democrats and their mostly faux outrage as they use their mentally ill to score brownie points as Sandoval gears up for re-election. After all, if they really took to heart Reagan's and Nixon's idea for local clinics, they would've done something about it in the last several decades. But they haven't.
This is simply disgusting. Instead of caring for these poor people tormented by mental and emotional turmoil, Sandoval's pretending this scandal doesn't exist, his chief mental health officer is using weasel words like "policy variations" and trying to pretend this is the exception and not the rule and that James Brown is an anomaly.
They put this poor guy on a bus to Sacramento with no one there at the other end waiting for him, no followup treatment plan put in place and no lodgings set up for him. He had thrust into his hands three days worth of medication, a few containers of Ensure and some cheese crackers before shoving him on a bus that would have 11 stops over a 15 hour journey.
Nevada's own policy of doing this many, many hundreds of times just in the last five years is part of the austerity budgets we've been seeing all over the country The constant warfare abroad and near-constant tax cuts for the rich have inevitably led to a severe curtailment of social services for the indigent and handicapped (Which, if it wasn't done by design, is surely the most incredible case of serendipity in human history). And putting on buses without meals and often without followup care the mentally ill is nakedly a way to save money (The official policy in Nevada even tries to claim Ensure is better for their former patients than bulk sustenance and at one point even uses the phrase "burden of care.").
It's obvious that no one really gives two shits for these poor people, including Nevada Democrats who are using them as a cudgel with which to beat Sandoval over his well-coiffed head. If Democrats in Nevada and elsewhere really wanted to do something about this, they wouldn't've let the unnecessary chainsaw of austerity cut into mental health services.
But Sandoval acting as if this isn't a scandal at all and visibly wishing the whole thing would just go away is just as heinous, if not moreso. Shipping indigent and homeless mental patients and just dumping them off in another state (Brown was even told by a psychiatrist to call 911 in Sacramento on his arrival) is simply bottomlessly despicable. Merely on the basis of this mental health scandal, the Jekyl and Hyde Sandoval and his heartless non-reaction ought to be made a one-term governor
5 comments

Patricia said...
I am surprised they gave him food and medicine, that seems like charity! Why not give him a gun so he can hunt his own food just like our rugged ancestors? I don't think Nevada is doing anything different with the mentally ill, that we haven't done to them for thousands of years. Just run em out of town so it's someone else's problem.
5/5/13, 10:51 AM

jaycubed said...
Back in the early 80's I worked at the the locked unit at LVMHC, the forerunner of Southern Nevada Adult Mental Health Services. What is now Rawson-Neal Psychiatric Hospital was a piece of desert next door. At that time there were 36 long term beds for the entire State of Nevada, minus Washoe County & Carson City which had the remains of the old Sparks State Hospital for placement. 36 beds (+ 24 short term beds at County) for about 700,000 people. The building did not meet code; with violations concerning room size, hygiene, safety egress, etc.

When the place was first built the neighboring community was repeatedly told that the facility would not be a locked psychiatric hospital despite the fact that patients were there on involuntary holds from court order. So, in order to not lie to the community they didn't lock the doors. After a variety of brutal crimes committed by escaped mental patients who broke into people's homes and committed a variety of violent acts against residents, they finally locked the doors (they continued to deny that they had locked doors or court ordered locked patients for years). At the time I worked there there were locked adult, adolescent & children's units.

On the bright side, the facility was small & had mostly decent staff that was usually ignored by management.

It was good that management typically ignored us because of their gross incompetence. Shortly after I left, one of our doctors killed two patients with his incompetence, giving them incompatible drug combinations. One of the patients died at LVMHC, sitting in front of the TV set at approx 9 AM. He was discovered dead when PM shift came on the floor at 3 PM. The medical director ordered staff to perform CPR, despite him being in rigor mortis, breaking both of his arms. Then the medical director falsified the time & cause of death on the patient's death certificate.

If the other patient who died hadn't been in County Jail when it happened, where the County Coroner investigated, nobody would have ever found out. No criminal or Medical Board action was taken. The medical director "retired" and went to work for a different State agency, making even more salary but losing kickbacks for placement contracts.

One of our doctors billed the State for 500 1/2 hour sessions a month, (not counting his lucrative private practice & County contracts). If he spent an hour a week with his patients and two hours on the premises I would have been surprised.

Nothing the State of Nevada's mental health system could do would surprise me.
5/6/13, 2:11 PM

For those things (not human by any definition) there is only one place for them to goto after leaving here. A one way all expenses paid trip to Hell. It isn't good enough for what they did here but it is all that can be provided for them. They deserve so much worse than that.
5/11/13, 1:48 PM
Post a Comment
<< Home
Contact
Home
Email:
brilliantatbreakfast at gmail dot com
RSS