Brilliant Recent Posts
Tales From the Soup Nazi Kitchen
McDicking Us Over
The First Rule of 2016...
The GOP's 10 Lesser Demands During the Government ...
Perhaps if President Obama saw more movies we woul...
Dispatch from Casa La Brilliant: The Aftermath
Million Kvetch March (A Brilliant at Breakfast Exc...
The Third Section's the Charm
Mr. Brilliant: 1955 - 2013
Open Thread: High School Ends but Douchebaggery is...


Alan Grayson Was Right. Is This Really up for Debate?
Posted by jurassicpork | 1:36 PM 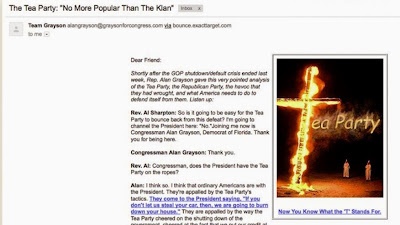 or, A Plausible Suggestion That Debbie Wasserman-Schultz is Huffing Styling Gel Fumes

If I had to pick one Democrat to get primaried like a sacrificial lamb in my own version of political equality, I'd pick Debbie Wasserman-Schultz. As Chairwoman of the DNC (Defeat 'n' Capitulation), Schultz represents, to me, everything that is horridly wrong with the eternally and pre-emptively supine Democratic Party. In a statement recently, Schultz had this to say about Alan Grayson's inflammatory fund-raising email that hit a bullseye in comparing the Teabaggers to the KKK: “Obviously I am disappointed in the use of that imagery. Both sides need to dial back that kind of rhetoric and look to bring more civility into politics.”
Yes, kiddies, we're back to this, "Both sides do it" mutual finger-pointing.
Yes, kiddies, we're also back to this belly-showing of the dickless version of the Democratic Party that still insists, despite not a subatomic particle of evidence to support it, that if we finally start showing the Republican Party and Tea Baggers who've made that party their bitch, some civility why then, they'll show us some civility, too, and we can all sit by the campfire at the annual Congressional camping junket and sing motherfucking "Kumbaya" and have a 'smores, a Coke, a smile and a greasy thumb up our ass.
As a fellow Jewish Representative out of Florida, a state that's had more than its fair share of cross burnings and lynchings, a state suffering through the most horrible Governor in its long, swampy history, one who'd denied Medicare expansion to his constituents because the dickless wonders of the Democrat Party allowed redneck states to opt out of Medicaid expansion out of respect for "states' rights", you'd think Wasserman-Schultz would know better in her ongoing whining about the deplorable state of immoral equivalence.
And when Wasserman-Schultz finds herself on the same side of an issue as jar-headed psychopath and cordite huffer Allen West, you know something's rotten in the sunshine state of Florida.


Allen West, former Congressman from Florida, is always right on target with his comments, we all know, and his recent Facebook post was exactly right. It’s the “white liberal progressives” who are the real racists in American society. It is obvious that liberals are the real racists here... Worse, they use racism as a tool to fool African Americans into voluntarily walking onto the liberal’s plantation.

Yeah, a vicious Uncle Tom like West, a guy who was in favor of every voter suppression law and bill that would've disenfranchised his people and who used an exclusively white Hell's Angel's wannabe biker gang as his personal security during the 2010 election and solicited angry, white votes in some Bizarro World simulacrum of post-racism, is claiming liberals like Grayson is leading his forgotten people not to the Promised Land but "the liberal's plantation."
Well, unless West is talking about Arianna Huffington's bloated blog, I have no idea what the fuck he's talking about. Fortunately, many people in West's district didn't either and they voted out this real-life Stephen of CandyLand after one term. And West is obviously too stupid or deluded to realize he's just a useful house nigger for every teabagger/Aryan Supremacist (but I'm being tautological) who thinks shoving West into the limelight to repeat their prejudices and conspiracy theories actually qualifies them for post-racial status. 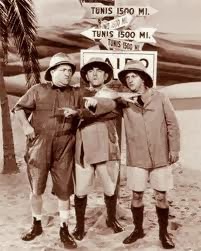 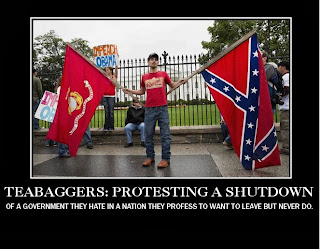 And that's just a few examples I've found from the past two or three years. Obviously, this is just the tip of the iceberg or burning cross, as it were. (Just as a personal aside, it's interesting that Wasserman-Schultz chose to take Alan Grayson to task over a fundraising email and not Rachel Maddow, who recently weighed in on this and drew similar conclusions).
And the indisputable, inevitable, incontrovertible conclusion a thinking person must make is that the Tea Party movement is hardly an original concept and they didn't just spontaneously appear on the scene in the spring of 2009, fully-formed like Athena from the skull of Zeus. These teabaggers are recycled, regurgitated and, until 2009, long since discredited and very politically-incorrect Birchers, KKK klansmen, neoNazis, skinheads and unaffiliated angry, southern redneck Republicans who cannot fathom why so many people could elect a biracial president when, in their razor-narrow world view, no black man should even be called "sir" much less "Mr. President." It was supposed to be the white man's Arab Spring, minus the Arabs and legitimate grievances. But something funny happened on the way to the cross-burning:
The Koch Brothers and their ridiculously-named Americans For Prosperity ("1% at a Time, Anyways") and Dick Armey's FreedomWorks and various 527s and 501(c)3 groups cynically latched on, spoon-fed them their talking points about how evil arch liberals like Obama were and eventually the parasite seeking populism became the host, with the Tea Baggers being demoted to the role of parasites.
And now we're seeing signs that the tea bagger fleas and ticks are being scratched off by the increasingly irritated host and they're not too happy about it. Now they're threatening to primary even the Republicans that, during Bush II, we thought were the worst of the worst, such as Mississippi's Thad Cochran, who's now considered too liberal and now has a primary challenger who makes Strom Thurmond look like Jerry Garcia after a brick of hash.
The Debbie Wasserman-Schultzes and Jon Stewarts seriously need to get their heads out their asses, walk off their sound stages and climate-controlled offices and talk to real Americans (and by that, I don't mean the "real Americans" in Sarah Palin's rose-tinted clown car windshield), specifically liberals and progressives who don't feel the need to throw verbal brickbats and firebombs at the White House when they have legitimate grievances, people who don't throw bricks through the windows of Republican Congressmen who opposed the health care law (as all of them did).
So, Debbie, do Dallas sometime. Or San Diego. Or Tampa. Or any other right wing cesspool of a city that proudly waves the Stars and Bars and Gadsden flags. Your attempts to get your belly rubbed will only get it kicked. Your genuflections and bowing and scraping before these inexplicably angry teabaggers will only get you curb-stomped.
And maybe people like Thad Cochran shouldn't get primaried by cryptofascists and neoconfederates. Maybe it's Democrats like you who ought to get primaried so you can make way for the real thing.
3 comments

Grung_e_Gene said...
It makes Right-Wingers mad when you call out their racism!

Republicans running on "their" Civil Rights legacy are like the Chicago Cubs claiming to be World Series Champs because they won in 1908...
10/25/13, 9:23 PM

It is amazing that people actually think its o.k. to fly the confederate flag. that is like waving the nazi flag. neither is on.

There must be a problem with American education when people who can't afford healthcare or decent homes, schools, etc. think they have anything in common with people such as the Koch brothers. Must have missed the class on critical thinking, for that matter thinking.

There is still a lot of racism in THE U.S.A. Yes, it must have been a real shock when a person was elected who did not look "white/caucasian". Whites P might want to try understanding their lack of "advancement" in the world isn't the fault of the person who has a different skin tone, but the power structure which prevents them all from making a decent living and having decent health care.
10/30/13, 8:12 PM

Storm'n Norm'n said...
History shows that the Ku Klux Klan was the terrorist arm of the Democrat Party. This ugly fact about the Democrat Party is detailed in the book, A Short History of Reconstruction, (Harper & Row Publishers, Inc., 1990) by Dr. Eric Foner, the renown liberal historian who is the DeWitt Clinton Professor of History at Columbia University. As a further testament to his impeccable credentials, Professor Foner is only the second person to serve as president of the three major professional organizations: the Organization of American Historians, American Historical Association, and Society of American Historians.

Dr. Foner in his book explores the history of the origins of Ku Klux Klan and provides a chilling account of the atrocities committed by Democrats against Republicans, black and white.

On page 146 of his book, Professor Foner wrote: "Founded in 1866 as a Tennessee social club, the Ku Klux Klan spread into nearly every Southern state, launching a 'reign of terror' against Republican leaders black and white." (google for the rest of the story)
11/6/13, 11:25 AM
Post a Comment
<< Home
Contact
Home
Email:
brilliantatbreakfast at gmail dot com
RSS