(By American Zen's Mike Flannigan, on loan from Ari.)
...don't talk about 2013.
The beauty of doing mere commentary instead of actual hard news (and by that I'm not talking about the Brangelina or Kim Kardashian's well-hidden stretch marks) is you don't have to do a lot of hard research and provide, as Frank Rich used to do at the NY Times, a surfeit of corroborating links. And one of the beauties of having a liberal byline is you can always take it as a rock-solid, absolutely immovable article of faith that both political parties will do their damnedest to punch themselves in the face in a never-ending masochistic orgy of some perverted self-recrimination. They just go about it in different ways.
Let's take the obvious example of this: The Republican Party essentially shut down the government for over two weeks, lost $24 billion, cost 125,000 jobs in October, furloughed 850,000 federal workers who still haven't gotten back pay, nearly drove us into default in violation of Section Four of the 14th amendment, nearly crippled our borrowing power and made the Dow Jones Average plunge nearly 900 points...
...all so they could, for the 43rd consecutive time, unsuccessfully overturn an existing, adjudicated law called the Affordable Care Act. And they did this at the expense of whatever little credibility and approval they had with the electorate, which historically has a dim view of Congress, and much campaign payola from dependable, longtime Republican donors. The GOP's approval rating, in contrast to Mr. Obama's steady 51%, has plunged to 8%, prompting John McCain to say, "We're down to blood relatives and paid staffers." And I wouldn't even count on the paid staffers, whose bosses tried to deny them subsidized health care. Democrats, as we now know, need to gain just 17 seats to retake control of the lower chamber and out of the 230+ Republican Representatives running for re-election, 22 are in vulnerable districts.
Ted Cruz's coattails have proven to be as wide as the Rio Grande as many Republicans running for national and state office (Especially Virginia's AG, Ken Coochie Coochie, who now finds himself down 17 points to Terry McAuliffe 50-33, which is what you get when you run on an anti-blowjob platform) are seeing themselves dropping out of contention faster than Wile E. Coyote falling off a cliff with an anvil up his ass.
To help sum it all up, a recent poll showed Republicans were less popular than hemorrhoids and herpes. Even Tom Donohue, the anti-Santa Claus and CEO of the US Chamber of Commerce said Ted Cruz should just shut up and sit down. And Cruz isn't doing himself any favors outside of redneck cities like Houston when he compares ObamaCare staffers to Nigerian bankers in some of the most nakedly vicious Republican dog whistle politics since Strom Thurmond and his segregationist platform in 1948.
Essentially, we can sum up the GOP's antics by comparing it to Fight Club, in which Edward Norton's character finds out he's Tyler Durdin and is caught beating the shit out of himself while Wall Street financial institutions blow up around him. In order to restore order and make the delusions go away, he then shoots himself in the head (Far be it for this scribe to suggest such a drastic and horrible thing to Republicans except to say no one is responsible for actions taken after bylines go to press.).
So here we find the Republican Party, bloody and on their ass after their self-pummeling, just coming to grips with the fact they were beating themselves up all along while the black guy saturninely stood back and let them. You'd think that would be the end of the story and that we could start licking our collective chops and look forward to another 40+ years of uninterrupted Democratic rule in the House, right?
Wrong.


The Blue-Clad Cavalry Once Again Comes to the Rescue 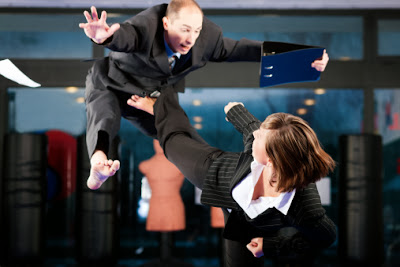 During his brief run for President five years ago, Joe Biden said something alarming. While on the campaign trail, he said to a Republican audience that the GOP, which had suffered a stinging defeat in the '06 midterms and were about to get their asses kicked back to Jebus Land again, needed to get back up and fight for what they believed in.
Here's the darker side of my Fight Club metaphor, the road far less traveled by our useless mainstream media: The Democratic Party's unfailing penchant for snatching defeat from the jaws of victory. We've seen it countless times after the Republican Party took one massive, collective Buster Keaton-class pratfall after another only to see the Democrats lower a hand to help them up and get, as gratitude, their balls kicked into Vancouver, British Columbia.
And we're seeing it again now. Now we're hearing about otherwise reliably-Democratic guys like Dick Durbin, Ron Wyden and Patty Murray dangling little strips of red meat to the GOP in order to coax them up off their shiny pants suit bottoms and those little pieces of red meat are "reforms" to entitlement programs that has nothing whatsoever to do with ObamaCare or the debt ceiling, the debt, deficit or anything else the GOP had almost single-handedly fucked up or tried to.
And then the Democrats wonder who encourages the Republican Party to take hostages every few months until they can get their way.
About a week ago as the clock's ticking got louder and louder, the GOP made smaller and smaller demands so they wouldn't have to leave the shower empty-handed. So the Democrats, after giving them the bird countless times, finally let them have a consolation prize, a provision in the health care law that was already in place. Clutching their cheap, plastic noisemakers in their pudgy little hands, the GOP psychopaths then ran home and crowed about their great victory over the Obama administration that had just proved it didn't have to negotiate with them to any degree.
Now suddenly, the Democrats are signaling they're reading to cave on Social Security, Medicare and Medicaid cuts for absolutely no reason whatsoever so they can be seen as negotiating in good faith with a self-professed band of Fifth Columnists who will stop at nothing to deny a black president whatever he wants, even if it was originally their idea (such as the individual mandate)?
Why?
Perhaps we'll never know the answer to this. As unsuccessful as this latest hostage-taking has been, one that had produced absolutely no Stockholm Syndrome love, especially among Wall Street types who have had to forgo that tinting on their third Bentley, this latest proposed and needless capitulation makes this upcoming battle over the government's funding on January 15th sound like a blackmail or extortion scheme. Maybe they found out FDR was banging Stalin during Yalta or maybe they have film of Kennedy boffing Marilyn Monroe, Jayne Mansfield and Jane Russell at the same time.
Whatever the Republicans have on the Democrats, it must be a fucking pip. Because otherwise, to those us necessarily looking up at this latest clown show in our worm's eye view, this upcoming appeasement strategy to a party with no political capital whatsoever makes not the slightest bit of sense.
0 comments