Brilliant Recent Posts
The Third Section's the Charm
Mr. Brilliant: 1955 - 2013
Open Thread: High School Ends but Douchebaggery is...
Assclowns of the Week #94: House of 'Tards edition
Don't Worry: It's Only a Chemically-Induced Coma
Filibusted
Dispatch from Casa la Brilliant: Superman Returns
The Republican Party: The Heaven's Gate of Politics
Why do Republicans hate Americans?
This is what happens when you turn the military ov... 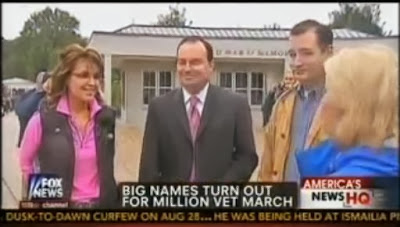 So, three right wing lunatics who've never served in the military hijack what was supposed to be a non-partisan rally orchestrated by veteran to simply ask the government to reopen their monuments, an act that didn't exactly make them very happy. Then the aforementioned right wing lunatics who've never worn a military uniform but love being photographed with them grabbed the spotlight while protesting a government shutdown that they themselves brought into being (Which makes the currently unemployed Sarah Palin kind of, I dunno, the Marianne Faithful of right wingnuttery).
Up until a couple of years ago, we thought the tag team of John McCain and Lindsay Graham were about as toxic a one-two punch as the Republican Party could muster in the Senate. That, of course, was before Mike Lee of Utah and Ted Cruz of Texas were elected on the same night. Since before the government shutdown, Cruz and Lee have been joined at the hip like Chang and Eng Bunker crying about our failure to communicate while doing their pinheaded best to ensure the government would be shut down by midnight on October 1st.
Fox "News" certainly did its fairest and most well-balanced best to ensure this veteran's group that had originally organized this march solely in the interests of reopening the veteran's monuments would be drowned out and pushed into the background in the interests of showing the Tea Baggers waving the Confederate flag before the White House while screaming about impeaching the President and lunatic fringe Repukes like Cruz, Lee and Palin.
You can dream up endless metaphors and similes to describe these traitors and seditionists, these audaciously hypocritical nut jobs who've hijacked the government, the debt ceiling, our credit rating, the House of Representatives itself, billions of dollars worth of pensions and other checks to those most in need of them.
They're like arsonists who set fire to a house then scuttle out the back door and run around the side to watch the fire engines try to extinguish the fire they set while deploring what a shame it is and blaming the black guy down the street.
They're like hostage takers who routinely say, "Hey, I think I'll take Uncle Sam hostage again without any clear goal in mind. I'll wait for the voices in my head to tell me later what my demands are."
They're like arsonists who hate houses who try and try to buy one only to burn it from within.
And lastly. they're what Congress in 1868 tried to keep out of the federal government when they wrote Section 3 of the 14th Amendment when they clearly stated that no one who'd ever worked to undermine the government shall ever hold elected office within that same government. If the rest of Congress grew a set, they'd invoke that third section of the 14th Amendment to put the kibosh on the Tea Bagger caucus.
It also should not be forgotten that 350,000 men died to keep the Confederate flag from flying over the White House. Yet to hear Fox "News" and other mainstream media organs, these well-meaning people are patriots and they really originated this rally.
The Koch Brothers and the Heritage Foundation had each issued communiques to the GOP House leadershop essentially saying to cut the shit and if you vote to end the shutdown, we won't primary your ass. The Dow Jones has already lost well over 850 points since the shutdown, they're pissing off their biggest, staunchest Republican donors. The Koch Brothers are telling them to get back to work. Heritage gave them a free pass. And still the government remains shut down over a tepid health care reform bill.
If they don't care about their donors, if they don't care about Wall Street, if they don't care about the Koch Brothers who openly employ so many of them, then what's the impetus for continuing the shutdown? Well, there's one obvious answer that has a lot of validity: Plain, stuck-in-the-mud racism. Deny the black man whatever he wants.
But there's something else keeping this sad jalopy of our government in the ditch. They'd painted themselves into a corner with the help of the 20 or 30 tea baggers still showing up at the occasional rally in DC. There's the tried-and-true Republican mantra at stake that government ought to be small enough to drown in a bathtub, that government's the problem. But the American people had long since come to the conclusion that the only part of the government that's the problem is the exact same part run by the Republican Party. And there's their petulant pride, their insistence on walking away with some consolation prize whether it be $40 billion in cuts to food stamps, delaying or defunding ObamaCare. Walking off the playground with their own ball isn't enough. It's all about winning or at least making sure, as their bloated oracle Rush Limbaugh said on Election Night 2008, ensuring the President's failure.
That meets many peoples' definition of treason and sedition because the GOP is openly acting in the capacity of a fifth column. And they need to be thrown out of office long before the vote-purged and gerrymandered 2014 midterms.
Any minute now, I expect these wingnuts to be protesting the observance of Columbus Day because the Italian explorer smashed their cherished notion that the earth is flat.
0 comments