We Are Fat and Happy and Can Suckle Some More
Posted by jurassicpork | 11:42 AM 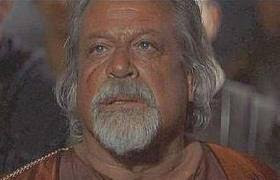 When I think of a certain line in Gladiator, one spoken by the late Michael Redgrave Oliver Reed, I think of the US government and the countless war profiteers it employs: "And the great whore will suckle us until we are fat and happy and can suckle no more." That line could've been spoken by any of the contract procurement specialists whose job it is to dispense multi-billion cost-plus, no-bid contracts like alms to the already rich and bloated.
And then when I hear this line, I think of those who've been entrusted with the lives and welfare of our troops overseas and this could've been uttered by any chickenhawk Republican about to send troops into hopeless, needless war: "Thrust this into another man's flesh, and they will applaud and love you for that. You? You may begin to love them -- for that. Ultimately, we're all dead men. Sadly, we cannot choose how."
And then there's this one, one that could've been spoken by any indifferent Halliburton/KBR executive: "I shall be closer to you for the next few days, which will be the last of your miserable lives, than that bitch of a mother who first brought you screaming into this world! I did not pay good money for your company. I paid it so that I might profit from your death. And just as your mother was there at your beginning, I shall be there at your end. And when you die - and die you shall - your transition will be to the sound of... [claps his hands]."
Therefore, with that introduction, I offer you a blast from the past: Remember the old acronym LOGCAP from the good old Bush/Iraq War days? In case you've forgotten it, it stands for Logistical Civil Augmentation Program, a nice little euphemism that seems to suggest only a friendly helping hand from the private sector and not the $38,000,000,000 boondoggle and clusterfuck it actually is. Apparently, the "civil augmentation" war profiteering, far from being a mere augmentation, essentially replaced virtually all functions formerly fulfilled by the military, including feeding the troops, setting up showers and providing potable drinking water.
That resulted in the US taxpayer subsidizing troops getting served bacteria-riddled food, bacteria-riddled drinking water and shower stalls that were essentially electrocuting, with impunity, those who'd used it. And, oh yeah, let us not forget paying them handsomely to rape and detain Jamie Leigh Jones with, as usual, complete and utter impunity. Despite constant scandals and ample evidence of fraud and a lax attitude toward the welfare of our armed forces, KBR was given a $150,000,000,000 contract to continue defrauding the government, including several no-bid contracts in Iraq in 2011 (two years after Obama took over).
You would think, at some point, like all conscientious parasites, Kellogg, Brown and Root would finally let loose with a bay window-cracking belch and push themselves away from the trough but you would be wrong, comrade. Today comes the news that despite having $100,000,000 in double billed expenses not honored by the Pentagon, despite the missing $1.8 billion in missing meal money, the $12,000,000 worth of missing meals, the pending litigation and all that...
Kellogg, Brown and Root is now telling the Pentagon that they will need another half a billion dollars and 13 years to wrap up operations in Iraq. That would be same Iraq we'd left back in December of 2011. You know, the country with hardly any American troops left to feed and do stuff for.
Yeah, I thought you'd love hearing that.
So explain to me again why there's no major push, or even so much as a single petition, demanding the Obama administration fire KBR immediately and to have them fork over the billions they've fraudulently bilked from the American taxpayer?
Suckle no more, my withered teats.
3 comments

e.a.f. said...
so much for free enterprise. Looks like all the welfare bums are corporations draining money from the economy and government. Some one should stand up and tell these assholes the party is over and they aren't getting another nickel. There are children who dont' have enough food to eat in the U.S.A. and their schools aren't sufficient for their needs. Spend the money on children adn their needs and the war machine can go learn about sex and travel. If the military personnel were as well looked after as these corporations, there might not be vets walking around homeless with PSTD. Nice going America. What a waste of money. Obama or Biden ought to grow a pair.
5/21/13, 9:31 PM
Post a Comment
<< Home
Contact
Home
Email:
brilliantatbreakfast at gmail dot com
RSS