Don't Cry For Him, Argentina
Posted by jurassicpork | 6:49 AM

So, this is what passes for "family values" in South Carolina's 1st district:
They decided to elect over a smart lady and successful businesswoman a guy who politically was three years ago like Eva Perón: Still in the public eye but deader than a doornail.
The man, for want of a better word, they elected to warm his old seat:
Lied to staff and his constituents that he was hiking the Appalachian trail when in reality he was fucking his mistress in Argentina, on the taxpayer dole... during Father's Day weekend.
While admitting he made a mistake, he nonetheless brings his mistress onstage with him along with the kids he abandoned on Father's Day weekend.
Because of this, the NRCC cut Sanford adrift.
Sanford, while doing absolutely nothing to rehabilitate himself, then violates his ex wife's wishes, for which he has to appear in court tomorrow on trespassing charges, by breaking into her house to watch the second half of the Super Bowl with a son that he suddenly remembered having, saying he did it, "because as a father I didn't think he should watch it alone."
He was nearly impeached and saved, inexplicably, by the Democrats, after his own party initially drew up 37 articles of impeachment against him in 2009. He was, however, censured. 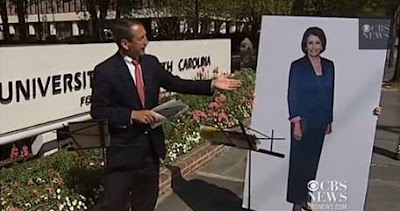 Channeling Clint Eastwood, Sanford then had a debate, which he lost, with a cardboard cutout of Nancy Pelosi.
Last night, South Carolina's 1st congressional district showed the caliber of its family values by electing Sanford back to Congress by nearly ten percentage points, simply because he was the one that had the "R" after his name, making SC-1's voters the very stupidest in planetary history. And they reelected this assclown after it had been established that his own ex wife couldn't trust him and his own party had abandoned him.
Well played, South Carolina, well played.
Fuck accepting the will and listening to the voice of the people: They elected Mark Sanford back into Congress. That is all you need to know about the mental and moral decay on the part of Sanford and SC-1's constituents. They sold out their so-called Christian family values for petty partisanship.
Wow. Just... wow.