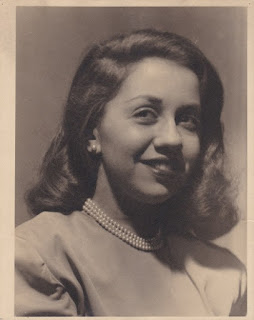 Where did this girl go?

Mother's Day shouldn't be political, but unfortunately, there is now a political subtext to it, because of the war against women's right to choose when or whether to reproduce. The louder the celebration gets, the less it seems like yet another commercial holiday designed to fill the coffers of the purveyors of flowers, chocolate, and jewelry, and the more it seems like a shot across the bow to those women who dare to think differently.

Then there's the young woman in the photo shown above. I don't know when that photo was taken, but I would guess that my mother was perhaps between eighteen and twenty when that photo was taken. I love that photo, because it shows what Mom was like at her best, when she could be funny and charming and magnetic. It's a side of her that we rarely if ever saw. At least I didn't, because while going through the thousands of photographs that emerged from her horrifically cluttered house, it was clear that this girl was long gone by the time I made my appearance.

I don't know what it's like to see Mother's Day as anything other than an obligation. Every year, at least until the end, I'd struggle to find something that she'd really, really like; something that would make her shake the dark gloom that pervaded her mind most of the time, even if just for a few minutes. Her second husband spent a quarter of a decade century trying to find the magic beans that would lift that gloom forever -- and he never did. For me, it was just an obligation that I had three times a year -- Mother's Day, her birthday, and Christmas.

Yesterday I went up to my storage unit to pull out some teddy bears and doll furniture to donate to the Renegade Pigs Motorcycle Club fund-raiser that is being held next Saturday at our local watering hole to benefit two local families who have children with severe medical issues. (This is health care in America for those who lack insurance, have pre-existing conditions, or have hit their lifetime maximum.) In a box I found "Lola", a bear I'd bought her online a few years ago. I don't know if she ever even looked at it, because "Lola" was still in the box with the original tissue paper. We found a lot of stuff like that -- clothes, jewelry, shoes, teddybears. Every time I find a new home for something of hers, even just going through these boxes of bears, I feel as if I'm somehow liberating them from the thankless task of trying to make someone happy who was just incapable of any kind of joy other than the fleeting joy of home shopping.

So I look at the girl in this photo and so many others, and I wonder where she went. I don't recall ever seeing her.

Syrbal/Labrys said...
Thank you for this. I saw a very similar picture of my own mother once, bright clear eyes and smile so similar. And like you, I didn't see that woman in my childhood. We no longer speak, she is in her 78 now, as at some point decided that I, her firstborn, was the cause of all evils in her life---had she NOT had me, she could have escaped her by then drunken husband, you see?

The sadder truth? She did not divorce him, he left her.
I was not her chain, but I am her scapegoat still.
5/13/13, 12:23 PM
Post a Comment
<< Home
Contact
Home
Email:
brilliantatbreakfast at gmail dot com
RSS