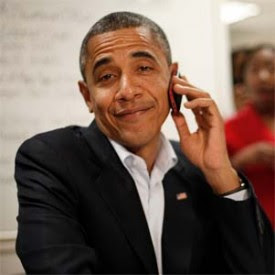 (By American Zen's Mike Flannigan, on loan from Ari.)
“It is an immutable law of the universe that if you give government power, it uses it.”- Former Congressman Bob Barr (R-GA)

If, after 2016, we take away any real revelations and insights from the Obama administration, it will be Republican-Libertarian Bob Barr's maxim of government always using power if it has it given to it. Perhaps, in a recycling of the Bush era cynicism of the overreach of government power, we may also trot out Ben Franklin's bromide about those who surrender liberty for a little security and deserving and receiving neither. More often than not, though, we may recall for the umpteenth time George Santayana's warning about those not heeding the lessons of history being doomed to repeat it.
Journalists and kitchen table pundits on both sides of the political spectrum and all those in between will no doubt dutifully trot out pertinent or potentially pertinent quotes from men and women long dead and gone but the most abstract takeaway from this AP phone record seizure business that just broke yesterday (Suspiciously, at the very beginning of the Monday-Friday news cycle) is that you simply cannot trust your own government.
If the history of the last 10 or 12 administrations teaches us anything, it's that Presidents, Senators, Congressmen and Cabinet officials will construe being elected or reelected as a Constitutional mandate to perpetrate, perpetuate and propagate any and all manner of evil and perfidy on the American people and its most cherished institutions. After all, we elect these men and women to represent us and our interests, or so we're told. And the very act of reelecting Barack Obama to a second term essentially gave him carte blanche, in his mind and those of his legal team, to spy on and kill American citizens whether here or abroad. In other words, if the president does it, it isn't illegal.
And that chilling and infamous quote from Nixon's interview with David Frost may certainly prove to be very relevant as a gleeful Republican Party that just wrapped up its Benghazi hearings begins to unearth more and more dirt on this phone records seizure scandal (And, if government teaches us one thing, it's that one or two human bones that fall out of the closet only leads to an entire graveyard of such bones. There's never such thing as one roach or mouse).
It's come out that Attorney General Eric Holder, almost surely acting on orders from the Obama administration, signed off on what is obviously an illegal seizure of the phone records of 20 AP offices which right now involves at least 100 journalists, although the number of those violated will expand as surely as the rising death toll of the factory collapse in Bangladesh. This came about after a May 7, 2012 report from the AP on our conduct in Yemen, by far the quietest front in the perpetually foggy and vague War on Terror, and, most tellingly, the administration's possible lack of honesty and transparency with the American people. And the fourth amendment's latest violation seemed to devolve on this paragraph:

The operation unfolded even as the White House and Department of Homeland Security assured the American public that they knew of no al-Qaeda plots against the U.S. around the anniversary of bin Laden's death. The operation was carried out over the past few weeks, officials said.

In true Big Brother form, the Obama administration then quietly responded in the only way presidential administrations know how: To prove how nontransparent it is by secretly seizing phone records of the same news cooperative that had raised a mild question about that same administration's transparency, or the seeming lack thereof, with the American people.
Gleeful and giddy Republicans completely bereft of a sense of irony will dive headfirst into this like so many piranhas into a water buffalo carcass as they finally have a legitimate scandal in which to wade with complete abandon. This is a spiteful and venal Republican Party, let's not forget, that hadn't the slightest problem with, and viciously defended, leaks against Bush's torture prisons in Eastern Europe and his now-infamous circumvention of the secret FISA courts. This is the same Republican Party that went after Bill Clinton, if we're to believe the late Congressman Henry Hyde, in retribution for Nixon's near-impeachment over Watergate (despite the fact the GOP was almost as dedicated to pursuing Nixon as the Democrats. Nixon quit soon after Senator Barry Goldwater informed Nixon in the Oval Office that enough Republicans were on board in the Senate to impeach Tricky Dick unless he skedaddled.).


"Those Who Do Not Heed the Lessons of History Are Doomed to Repeat It and This Quote."
And the Republican Party and its spittle-flecked apologists can be given some leeway in resurrecting Watergate, the scandal that doomed countless faux scandals and tempests in teapots to have the suffix "-gate" Velcroed to it. First, however, we need to differentiate Watergate from the current scandal:
Watergate came about when then President Richard M. Nixon dispatched various "plumbers" to break into Daniel Ellsberg's psychiatrist's office to dig up incriminating evidence on the former Rand war analyst after he'd leaked the Pentagon Papers to the NY Times and other mainstream media outlets proving the Nixon and Johnson administrations were saying one thing about their strategy in Vietnam and doing another. This later expanded to Nixon ordering the FBI and CIA to wiretap Democratic National HQ, blah, blah, blah.
Barack Obama surely signed off on the seizure of the AP phone records, which are not the same as actual wiretaps. But that distinction is cold comfort, indeed, as it automatically and with one fell swoop reversed the roles of the media and government. As children, we were raised with the idea that the media is supposed to be the watchdog of the government in a free democratic society, not vice versa. As yet, there's no smoking gun directly implicating Obama as the one found during the Watergate hearings in Nixon's hand after the fact. Obama did not spy on the opposition party as did Nixon but that's not the point.
The point is that the Obama administration viciously persecutes and prosecutes whistleblowers as did the Bush administration and Nixon's. At least in Nixon's case, Watergate came about because of his personal sense of Learesque paranoia. With the Obama administration, this latest circumvention and violation of the fourth amendment was coldly impersonal and carried out as if it's an established way of doing things.
And that's the problem: It is.
Ellsberg, while he was persecuted by Nixon and his countless flaks, at least never saw the inside of a jail cell, although he nearly did. Wikileaks whistleblower Bradley Manning will have been in prison for three years this May 26th and has been treated like a drunken, passed out coed at a frat party. Having released incriminating video evidence and much more of our true actions in Iraq after being fed a completely different and much more benign narrative by the Bush administration, the Obama junta then had Manning arrested and detained in dehumanizing conditions while the case against him drags on toward its fourth year. Considering the Obama administration's overt covering up for the preceding administration, this persecution and prosecution of Manning and other whistleblowers in the glorious Age of Obama shouldn't come as a surprise.
And if the last several administrations have taught us anything it's that whatever government currently in power will always more ruthlessly and efficiently guarantee its own safety than that of the American people. The underwear bomber arrested a little over a year ago embarrassed the administration because after repeated assurances there was no credible threat of an al Qaeda plot to avenge bin Laden's alleged killing, the CIA days later thwarted just such a plot for just such a reason.
Of course, it would work far better in the interests of the Obama or any other administration if it more often admitted it was wrong but that it's constantly taking steps to assure the safety of all Americans. I'm sure I speak for many when I say we can better live with a government that's not infallible and upfront about it than one that viciously seeks retribution when its fallibility is uncovered. But of course that's not how government operates. As Bob Barr once famously said, if you give power to government, it will use it and the only way they can respond to embarrassment is to childishly seek retribution whatever the cost to the Constitution they'd sworn to uphold.
If a direct connection to Obama and the seizure of the AP's phone records can be established, then the President certainly needs to be impeached and prosecuted to the fullest extent of the law for violating the Constitution he'd sworn, twice, to uphold. But I would also ask Republicans to search what ludicrously passes for their souls and realize that, after Watergate and the countless war crimes of the Bush administration, they are certainly no better than the war criminals of the Obama administration. Because they are part of that government that will unthinkingly use the power invested to it by the American people.
1 comments