Brilliant Recent Posts
The Stupidest Staff in Congress
The sociological perspective on navigating in and ...
If He Hollers, Don’t Let Him Go
Yes I am still alive
The News at a Furtive Glance
Blogrolling In Our Time: I Sedionisti edition
Top 10 Reasons For the Pope's Resignation
The rise and fall of prog-talk radio
Around the Blogroll and elsewhere: Now with addit...
Top 10 Emails Hacked From the Bush Family's Email ... 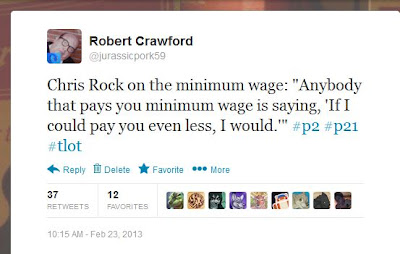 It's always mystified me, how right wing nut jobs with more car derelicts and washing machines in their front yards than blades of grass stubbornly cling to the delusion that trickle up and trickle down economics works. Because self-styled conservatives think, for want of a better word, in frames and when you compartmentalize your thinking in rigid frames, no force on earth can move you to rethink, reappraise or reform your mode of thinking.
Since the Southern Strategy of 1972, poor southern voters were convinced by the criminals of the Nixon administration that whatever the liberals wanted was inherently evil and was akin to Socialism and Communism. Then when Reagan began his rise in 1980 (by kicking off his campaign with a dog whistle speech in Philadelphia, MS, where four civil rights workers were brutally murdered with virtual impunity), the divide created by Nixon and his henchmen was officially turned into a schism.
It was Reagan, in the first year of his presidency, who'd dramatically lowered taxes on the wealthy by citing a theory pioneered by Milton Friedman and other acolytes in the Chicago School of Economics and that theory was called "Trickle Down Economics" (which his own Vice President George HW Bush called "Voodoo Economics").
The whole idea was so patently absurd and arrogantly flew in the face of established economic history and theory that one who has more than two neurons to rub together is amazed that it had gained any traction ever, let alone still being a driving force behind Republican economic policy today. Essentially, Trickle Down Economics boils down to this:
Let's make the "job creators" in this country so obscenely bloated that some of it is bound to trickle down into the waiting, gaping mouths of the proles like crumbs falling from the beard of Henry the 8th to his bowing and scraping servants. This is rife with lies: #1, when the wealthy get tax breaks, they simply sock the money away in an offshore account so that even the interest cannot be taxed. None of it gets trickled down. Another ridiculous fallacy is that everyone in the top 1% is a "job creator". This plainly doesn't apply to wealthy individuals like right wing talk show hosts like Rush Limbaugh, hedge fund and vulture fund managers in the financial sector and so many others.
To sum it up, history over the last 32 years has taught those still willing to listen and learn that the post Reagan economy can be summed up thusly: It's not a trickle up system but a geyser and then there's the trickle down effect, minus the trickle.
Under the fiscal cliff deal, the personal income tax rate on those making $425,000 or more has been capped at 39.6%, still well below the 90% it was set at during the Eisenhower administration. And even with a 5% increase on capital gains taxes, they're still capped at an absurdly low 20% with none of the loopholes (such as the stock option one that got Facebook a nice fat $429,000,000 refund courtesy of John and Jane Q. Public) even being addressed let alone closed. Plus, the much-ballyhooed Fiscal Cliff deal made the Bush tax cuts permanent for everyone not in the top 1%.
Meanwhile, the Obama administration is still jockeying for position trying to claim credit for wanting to cut "entitlements" such as Social Security, Medicare and Medicaid. 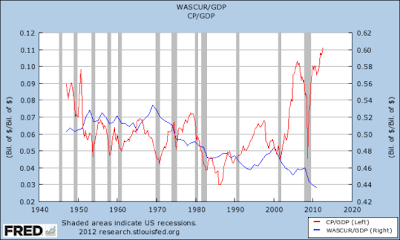 Bob said...
Watched economist Richard Wolff with Moyers. Never see this guy on Meet the Press. His supposed "Marxist" views include the truth the the destruction of unionism was deliberate, ruined wages, dashed hopes, & disarmed the American people from the one real weapon we had to fight corporatism. Hell, sometimes I think American auto companies designed shit cars in the Sixties & Seventies so union workers, just assembling them as told, could be blamed as overpaid slackers.
2/25/13, 2:06 AM
Post a Comment
<< Home
Contact
Home
Email:
brilliantatbreakfast at gmail dot com
RSS