Brilliant Recent Posts
The rise and fall of prog-talk radio
Around the Blogroll and elsewhere: Now with addit...
Top 10 Emails Hacked From the Bush Family's Email ...
Liberals Are the New Bush Democrats
The day the music died
Blogroll Amnesty Weekend 2013
Why Isn't There a White History Month?
Today in Gun Nuttery
Eight isn't Enough
Today in Gun Nuttery


Top 10 Reasons For the Pope's Resignation
Posted by jurassicpork | 10:59 AM 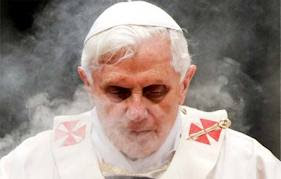 Earlier today, Benedict XVI, the 265th Pope, announced to the College of Cardinals that he would resign effective February 28th. The Pontiff cited health reasons and his physical and mental inadequacy to be the spiritual leader of over one billion Catholics worldwide. Yet, there were other reasons for Benedict becoming the first Pope in nearly 600 years to resign while in office. What were they?
10) Can now finally invest in that condom factory in Berlin.

6) Increasingly difficult to explain stronger and stronger smell of fire and brimstone on person.

4) Even he can't stand that "old man smell" in glassed-in Popemobile.

2) Michele Bachmann's inexplicable incumbency and the rise of Snooki making him doubt God.

Naomi666 said...
I expect to hear something lurid, unsavory and/or criminal has brought us to this joyous day.

Blotz said...
‎"Benedict said in a statement today that he was retiring to spend more time searching for his Precious, which was stolen from him by the nasty Baggins."
2/11/13, 6:17 PM

Naomi666 said...
If he's claiming to be "worn out", I'd suggest he stop wearing his Halloween costume. His "regalia" is encrusted with solid gold! And trade the Prada slippers for thongs. Just don't let any papparazi capture "shoot" you...
2/13/13, 6:07 PM

Anonymous said...
You first 3 in closet sumbags don't have any problem bashing the Catholics as with mist liberals the Catholic & Christian Americans are ok to Target, but you wouldn't think of attacking the Moslems or Jews
Assholes ill bet not one of you ever spent a day in US Armed Forces
Maybe you need to Blitz rod from your add....
3/6/13, 2:13 PM
Post a Comment
<< Home
Contact
Home
Email:
brilliantatbreakfast at gmail dot com
RSS