Brilliant Recent Posts
The News at a Furtive Glance
Blogrolling In Our Time: I Sedionisti edition
Top 10 Reasons For the Pope's Resignation
The rise and fall of prog-talk radio
Around the Blogroll and elsewhere: Now with addit...
Top 10 Emails Hacked From the Bush Family's Email ...
Liberals Are the New Bush Democrats
The day the music died
Blogroll Amnesty Weekend 2013
Why Isn't There a White History Month?


Yes I am still alive
Posted by Jill | 7:26 PM
Haven't been inspired to write of late, but I'm still alive. Work is crazy again and I just found out today that no fewer than twenty-three packing cartons of collectible teddybears will shortly be sent to my house for the purpose of selling them on Ebay, RubyLane, and/or at the JMK Doll and Bear show in August. It's kind of Mom's last revenge.

You see, Mom had a habit of calling me right when I was in the middle of some crunch project with an impossible deadline and asking if "in my travels in the stores" I could pick up and ship to her some something she could just as easily get in Durham. Mom was only happy when people were doing things for her, and then only for about five minutes afterward. When I would say that I wasn't going to stores (and indeed I was sometimes even using the pickup service at the Shop-Rite until they kept giving me pink boxes of Scotties when I specifically said NO PINK in my order), she'd get huffy and always say something about how soon she would be dead and never bother me again. This was supposed to guilt me into looking for just the right size George Foreman grill or whatever it was she wanted.

But now there are the bears -- twenty-three boxes of them. Boxes of Steiff bears and other animals, English bears, other German bears, Boyd's bears. So if you've been wanting to get someone a nice teddybear, I'm like Red in The Shawshank Redemption. I can get things...because I will already have them. 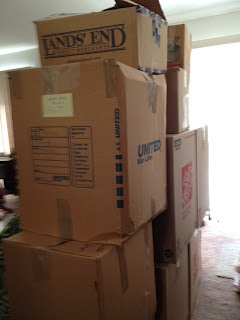 Just a few of what's coming

That's enough that I had to call my nearest Westy and reserve a storage unit.

And sometime this spring, in between working on yet another project with a ridiculous deadline and two huge system mods, I will begin my part-time career as Collectible Stuffed Animal entrepreneur.

I should have just gone to the mall and gotten her whatever she wanted. Except it would have been Just More Stuff.
3 comments

Jimbo said...
Are you some sort of salesperson by career? I would find this a huge pain in the butt frankly. Love your blog in any event.

But, like some other blogs the number part of the captcha is basically impossible to read without a microscope.
2/17/13, 8:46 PM

Ramona Grigg said...
Holy wow, Jill. Honestly? 23 boxes? Are any of them more than 20 years old? If they are, set up an account at Etsy. So much better for vintage collectibles than that other four-letter-venue-that-starts-with-E.

If you want details, let me know. I have a shop there and it's totally painless.